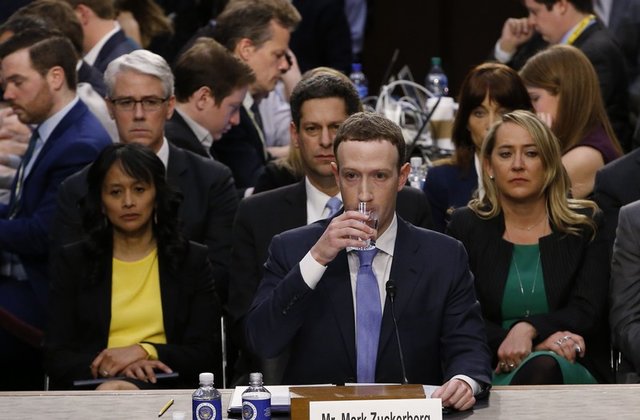 Facebook CEO Mark Zuckerberg takes a drink while testifying before a Senate Judiciary and Commerce Committees joint hearing regarding the company’s use and protection of user data on Capitol Hill in Washington, D.C., April 10 - Reuters

WASHINGTON/SAN FRANCISCO ―Facebook Inc Chief Executive Mark Zuckerberg started testifying before Congress on Tuesday as he looks to fend off the possibility of new regulations as a result of the privacy scandal engulfing his social network.

The 33-year-old internet mogul faces tough questioning from a joint hearing of the U.S. Senate’s Commerce and Judiciary committees.

John Thune, chairman of the U.S. Senate Commerce, Science and Transportation committee, struck an adversarial tone in his opening remarks.

“In the past, many of my colleagues on both sides of the aisle have been willing to defer to tech companies’ efforts to regulate themselves. But this may be changing,” he said.

Hours before the hearing, people waited in a line inside the Hart Senate Office Building, set off by velvet ropes, stretching from the briefing room down a corridor. Some brought folding chairs, while others stood or sat on the floor.

Zuckerberg, who founded Facebook in his Harvard University dorm room in 2004, is fighting to prove to critics that he is the right person to go on leading what has grown into one of the world’s largest companies.

Facebook faces a growing crisis of confidence among users, advertisers, employees and investors after acknowledging that up to 87 million people, mostly in the United States, had their personal information harvested from the site by Cambridge Analytica, a political consultancy that has counted U.S. President Donald Trump’s election campaign among its clients.