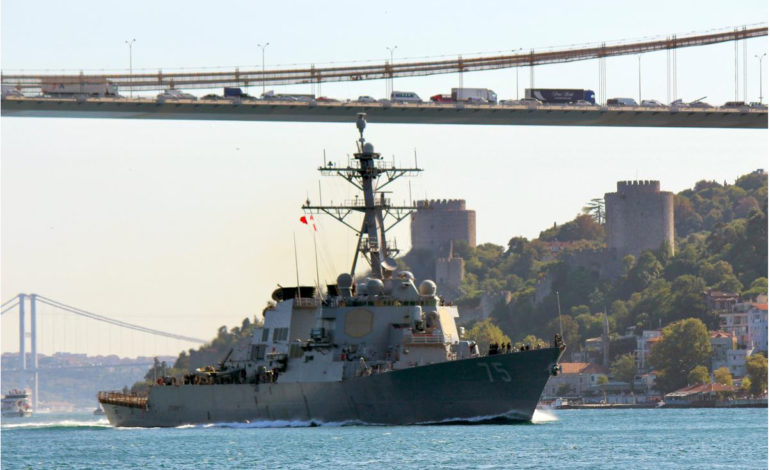 WASHINGTON/LONDON – President Trump and his national security aides on Thursday discussed U.S. options on Syria, where he has threatened missile strikes in response to a suspected poison gas attack, as a Russian envoy voiced fears of wider conflict between Washington and Moscow.

Fears of confrontation between Russia, Syria’s big ally, and the West have been running high since Trump said on Wednesday that missiles “will be coming” in response to the attack in the Syrian town of Douma on April 7, and lambasted Moscow for standing by Syrian President Bashar al-Assad.

Trump tempered those remarks on Thursday.

“Never said when an attack on Syria would take place. Could be very soon or not so soon at all!” Trump wrote in a tweet on Thursday.

Trump met with his national security team on the situation in Syria later in the day and “no final decision has been made,” the White House said in a statement.

“We are continuing to assess intelligence and are engaged in conversations with our partners and allies,” the statement said, adding Trump would speak later on Thursday with French President Emmanuel Macron and British Prime Minister Theresa May.

French President Emmanuel Macron said France had proof the Syrian government carried out the attack near Damascus, but still waiting for all the necessary information to be gathered!

French President Emmanuel Macron said France had proof the Syrian government carried out the attack near Damascus, which aid groups have said killed dozens of people, and will decide whether to strike back when all the necessary information has been gathered.

“We have proof that last week … chemical weapons were used, at least with chlorine, and that they were used by the regime of Bashar al-Assad,” Macron said, without offering details of any evidence.

“We will need to take decisions in due course, when we judge it most useful and effective,” Macron told broadcaster TF1.

Prime Minister Theresa May held a special cabinet meeting to weigh whether Britain should join in any possible military action. She has cast the attack in Douma, which was held at the time by rebels, as barbaric.

Syria, Russia and Iran, have said reports of the attack were fabricated by rebels and rescue workers (White Helmets) in Douma

Syria and its backers, Russia and Iran, have said reports of the attack were fabricated by rebels and rescue workers (White Helmets) in Douma and have accused the United States of seeking to use it as a pretext to attack the Syrian government.

In Washington, Defense Secretary Jim Mattis told Congress he believed there was a chemical attack in Syria, but added a short while later that the United States had not made any decision to launch military action in Syria.

NBC News reported that U.S. officials obtained blood and urine samples from victims of the Douma attack, but not “confident” 100 percent!

NBC News reported that U.S. officials obtained blood and urine samples from victims of the Douma attack that tested positive for chemicals, mainly for chlorine and some for a nerve agent. The officials said they were “confident” in the intelligence though not 100 percent sure, NBC News said on its website.

A team of experts from the Prohibition of Chemical Weapons, is on its way to Syria to investigate the allegations

A team of experts from the global chemical weapons watchdog, the Organization for the Prohibition of Chemical Weapons, was traveling to Syria and will start their investigations on Saturday, the Netherlands-based agency said. It was not clear whether Trump and U.S. allies would wait for the results of the investigation before deciding on a possible strike.

Russia, Assad’s most important ally in his seven-year-old war with rebels, said it deployed military police in Douma on Thursday after the town was taken over by government forces.

“They are the guarantors of law and order in the town,” RIA news agency quoted Russia’s defense ministry as saying.

There were signs of a global effort to head off a direct confrontation between Russia and the West. The Kremlin said a crisis communications link with the United States, created to avoid an accidental clash over Syria, was in use.

Threats by the U.S. and France were a violation of the U.N. charter, Russian foreign ministry spokeswoman Maria Zakharova

There was no direct word from Russian President Vladimir Putin on the crisis, though he discussed the situation with Turkish President Tayyip Erdogan by phone on Thursday, Interfax news agency said.

The Russian foreign ministry said Moscow sought no escalation of the situation, but could not support “dishonest accusations” and had found no evidence of a chemical weapons attack in Douma.

Statements from Washington have been militaristic, and threats by the United States and France were a violation of the U.N. charter, ministry spokeswoman Maria Zakharova said.

Vassily Nebenzia, Moscow’s ambassador to the United Nations, said he “cannot exclude” war between the United States and Russia and urged Washington and its allies to refrain from military action against Syria.

“The immediate priority is to avert the danger of war,” he told reporters. “We hope there will be no point of no return,” the envoy said.

Russian ships had left the Tartus naval base in Syria, Interfax news agency quoted a Russian lawmaker as saying. Vladimir Shamanov, who chairs the defense committee of the lower house, said the vessels had departed the base for their own safety, which was “normal practice” when there were threats of attack.

The Russian military said it observed movements of U.S. naval forces in the Gulf. Any U.S. strike would probably involve the navy, given the risk to aircraft from Russian and Syrian air defenses. A U.S. guided-missile destroyer, the USS Donald Cook, is in the Mediterranean.

The Syrian conflict has widened the rifts between Moscow, Washington and European powers and inflamed the bitter rivalries that run across the Middle East.

Syria, Russia and Iran say reports of the attack were fabricated by rebels and rescue workers in Douma and have accused the United States of seizing upon it as a pretext to attack the Syrian government.