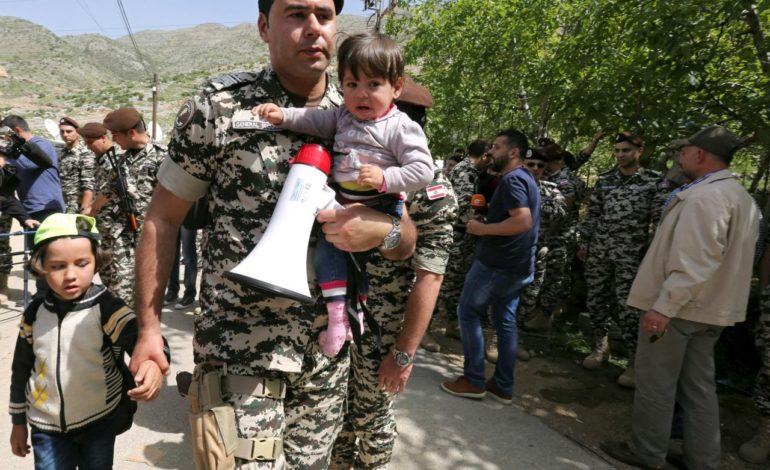 Lebanese general security member holds Syrian refugee children, who fled to Lebanon, as they wait for buses to go back to Syria from the southern village of Shebaa, Lebanon, April 18

SHEBAA, Lebanon — Several hundred Syrians who have lived for years as refugees in Lebanon left for their home country on Wednesday in a rare case of a mass return of those who left the country since the Syrian civil war began in 2011.

Nearly 500 people, including children and the elderly, left the Shebaa area in southeast Lebanon in 15 buses for the Beit Jinn district in Syria, southwest of Damascus, which was recaptured from rebels by pro-government forces in December. The buses reached the Lebanese border on Wednesday afternoon before crossing into Syria.

“We had no news about our hometown. My family and I are happy to be going back,” said Younes Othman, 31, who was a farmer in Syria and is returning after four years in Lebanon.

The convoy was organized by the Lebanese authorities, Lebanon’s state news agency NNA reported. The U.N. refugee agency UNHCR, in a statement, said it was not involved in organizing “these returns or other returns at this point, considering the prevailing humanitarian and security situation in Syria”.

More than half of Syria’s pre-war population have fled their homes since the outbreak of war in 2011, including more than a million who sought refuge in tiny Lebanon, where they now make up more than a quarter of the population.

Some leading Lebanese politicians, including President Michel Aoun, have called for Syrian refugees to return to calmer parts of Syria, but the United Nations says they should not be forced to go back.