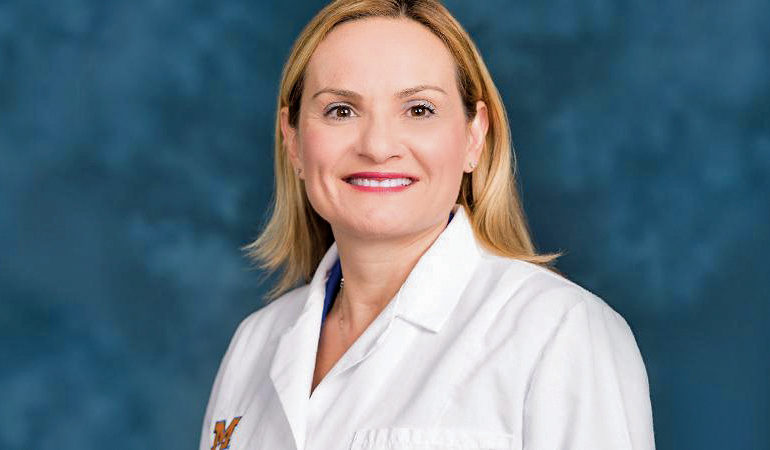 NATIONAL HARBOR, MD — As the nation’s communities become more diverse, so do the health needs of its women. The Association of Professors of Gynecology and Obstetrics (APGO)— which sets educational objectives for medical students across the nation and focuses on women’s health— knows that all too well.

So, the APGO appointed Maya Hammoud its first Muslim president to hold that office. The APGO’s board voted to elect her to a two year position as the association’s 52nd president, beginning in March.

Hammoud, 48, told The AANews that her “ambitious” primary goal is to transform medical education to improve healthcare for women.

The new curriculum aims to prepare future physicians with skills to improve the quality, outcomes and costs of health care delivery and show how technology could play a part in student education.

Doctors are traditionally taught to focus on individuals and their treatment, she said. But her approach will be to equip physician educators with “new and cutting-edge” health education practices based on “health systems science.”

“To align with these changes, undergraduate and graduate medical education must expand required competencies,” she said.
She added that the new curriculum highlights quality, safety and high-value care, as well as the related areas of improvement, population health, policy, informatics, teamwork, leadership, change management and systems thinking.

Throughout her participation in the organization since 2000, Hammoud said the APGO has always paid special consideration to teaching healthcare professionals how to care for women in ethnic communities.

Dr. Maya Hammoud For example, Hammoud said many Arab American women don’t seek preventative healthcare like screening for breast or cervical cancer as often as women from other communities. Many also don’t fully acknowledge the harmful effects of smoking.

Another example she gave was that many studies show that maternal mortality is higher among Blacks than Whites in the U.S., but a similar study had never been focused on mortality rates in Arab American communities.

While Hammoud has only served as the APGO’s president for about a month, her message is already resonating. She said that as soon as she took up the position, she received an email from a hospital administrator in a mostly Jewish community in New York, asking her for help developing guidelines in the operating room regarding patients who wear hijabs.

Hammoud said the healthcare field has made great strides in paying special attention to how different populations should be treated, and encouraged Arab and Muslim American women to pursue leadership positions to continue with those efforts.

“[The APGO] continues to occupy a unique position in offering contemporary teaching and learning tools for physician-educators and students so they can provide optimum health care to women,” she said. And while Hammoud said the APGO Scholars Program helped her develop as a leader, Dr. Hope Ricciotti, who sits on the APGO board and is chair of the OB-GYN department at Beth Israel Deaconess Medical Center in Boston, said Hammoud is a perfect fit to be president because of her character-molding background.

While introducing Hammoud at the APGO’s annual conference in Maryland in late February, Ricciotti told the story of an immigrant who set her mind on helping people no matter their religion or socioeconomic situation.

Hammoud’s family immigrated from Lebanon when she was 17-years-old, escaping an unsafe political environment and the possibility of her brother being enlisted to fight in the civil war.

And while she did not know English at that time, she took a job in a Kmart cafeteria and helped her father at his gas station, while pursuing her education.

Her father strongly encouraged his children to at least obtain a master’s degree. “Her dad was a man ahead of his time in promoting gender equity,” Ricciotti said.

Hammoud’s siblings have gone on to become lawyers, PhDs, engineers and physicians. Hammoud told The AANews she was one of the very few Arab Americans to attend the University of Michigan Medical School when she was a student in the early 90’s.

Today, she said the medical school enrolls “quite a high number” of Arab American students and is hiring healthcare workers, including more midwives, to better cater to the Arab and Muslim communities.

Hammoud is the associate chair for E-Learning and Enabling Technologies, director of the Center for Education, and clerkship director for Obstetrics and Gynecology.

She also works as a medical education innovation consultant with the American Medical Association (AMA), currently focusing on the national dissemination and implementation of health systems science education across all medical schools. Hammoud is active in several national organizations, including The American College of Obstetricians and Gynecologists, where she represents the University of Michigan on the simulation workgroup.

In addition, she is an oral board examiner for the American Board of Obstetrics and Gynecology (ABOG) and chair of the National Board of Medical Examiners’ International Foundations of Medicine Integrated Exam and Test Material Development Committee.