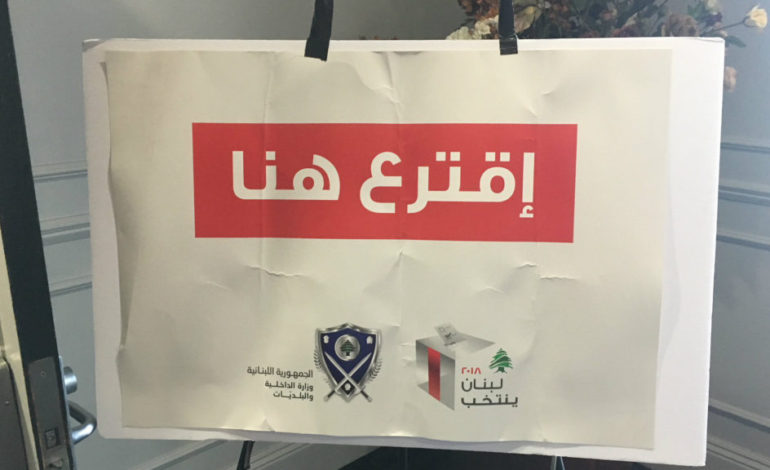 “The poor turnout was due to the limited time many voters had to register and prepare necessary documents, as they had not initially expected that elections would be held outside Lebanon.” -Salim Sassin, a Free Patriotic Movement leader

DEARBORN – Lebanese Americans in Metro Detroit are proud to have participated in their homeland’s parliamentary elections for the first time and welcomed a new electoral law, but are concerned that their votes were cast in vain.

Many voters said they hoped to shake up a stagnant parliament and change the face of Lebanese politics, as this year brought a large number newcomers, including women candidates.

But the election failed to produce a significant shake-up in the parliament, although the little change it did bring gave expatriates a glimmer of hope about the future of their impact on the election process.

The Lebanese Consulate in Detroit said more than 10,000 registered Lebanese voters are registered in the United States, including about 800 in Dearborn.

Suzan Mouzi-Yassine, the consul general of Lebanon in Detroit, said 2,245 Lebanese who reside in the consulate’s jurisdiction covering 14 midwestern states registered to vote in the election.

Of those registered in the Midwest, about 50 percent voted.

He added that he hopes Lebanon’s political parties will work hard to further develop election laws that that would lump Lebanon’s many districts into one district or just a few.

Salamey attributed the low voter turnout among expatriates in Metro Detroit to the fear some had that their vote would brand them as supporters of terrorism. They were concerned that casting their ballot with Hezbollah candidates checked off, whether intentionally or not, could make them material supporters of terrorism under federal law and they could face being harassed at border checkpoints and airports.

Salim Sassin, a local Free Patriotic Movement leader, said despite the fact that turn-out was poorer than in previous election cycles, he pointed out that the new electoral law allowed for the election of four women who for the first time did not inherit or win by a widow’s succession.

He also said changes in the size of the parliament’s blocs were as a sign of the effectiveness of the new electoral law, which all political parties agreed upon.

According to Sassin, the Future Movement lost some representatives while the Lebanese Forces doubled its numbers. Some veteran political figures like Botrus Harb and Nicolas Fattoush are no longer in the parliament.

Sassin reported that Christian Lebanese Americans voted for a variety of parties.

“There was no overwhelming majority for a particular party,” he said.

Sassin explained that the poor turnout was due to the limited time many voters had to register and prepare necessary documents, as they had not initially expected that elections would be held outside Lebanon.

On the other hand, Milad Zohrob, a local activist affiliated with the Phalanges party (Kataeb) and the National Liberal Party, said the turnout was disappointing for both Muslim and Christian Lebanese in Metro Detroit. He pointed out that while 2,245 Lebanese Americans registered to vote in the 14 states under the jurisdiction of the Lebanese Consulate of Detroit, more than 150,000 reside in those states.

He added that the majority of Christian Lebanese Americans who participated in the elections in Metro Detroit voted for the Lebanese Forces and, “had the most energized presence at the polling locations at the Consulate in Southfield and at the Macedonian Cultural Center in Sterling Heights.”

“There is no ideal electoral law in the world, yet the new law is better than the previous one,” said Tariq Madi, director of the Lebanese Forces chapter in Michigan. He lauded expatriates’ participation and desire to play a role in shaping the future of their country.

Mohammad Shebani, a local activist, said the low number of those who registered and voted does not reflect the willingness of expatriates to participate and make a real impact. He said he hoped there would be a boost in energy in the next election cycle.