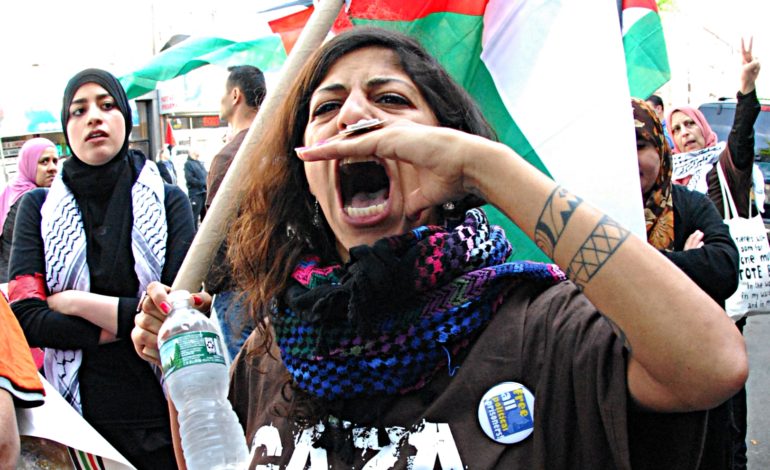 Arab Americans in Bay Ridge protest the Israeli assault on Gaza and the U.S. embassy's move to Jerusalem - Photos by the Brooklyn Reporter

NEW YORK — On Monday, May 14, the NY4Palestine Coalition and community leaders held a march from 72nd Street to 82nd Street along Fifth Avenue in the Bay Ridge neighborhood of Brooklyn in protest of President Trump’s decision to move the U.S. Embassy to Jerusalem.

The move has been met with outrage across Palestine as protests began along the Gaza border early Monday morning, leaving 60 Palestinians dead and injuring more than 2,700 others, including women and children. With a rising casualty toll, the recent protests were the deadliest protest in the Gaza area since 2014 when war broke out between Israeli forces and the Hamas group in Gaza.

“It is a terrible decision by our president,” Jaber said. “He knows that the region is in turmoil, and he [Trump] shouldn’t have moved it without solid information about the rights of the Palestinians.”

Organizers of this rally were motivated not only by the opening of the embassy in Jerusalem but also to acknowledge the 70th anniversary of “the catastrophe” or “Nakba.” The catastrophe refers to the day on which Israel declared its statehood and began the widespread expulsion of Palestinians throughout the area. Protesters were marching under a banner that read “Rights of Return.”

“Trump does not have the right to give away Palestine,” said NY4Palestine leader Nerdeen Kiswani, who spoke at the rally before marching began.

Kiswani also spoke out against the military aid given by the United States to Israel every year, amounting to around $10 million per day.

“The community is coming out to this rally to refuse to concede more and more Palestinian land, including Jerusalem,” Kiswani said, in concluding her remarks, “and we will continue to resist until we return to our homeland.” Other protesters included Jawahir Kamil, who traveled four hours to Bay Ridge just to participate in the protest.

“I feel angry,” Kamil said. “I feel it’s not fair; I feel provoking the Palestinians shouldn’t be done. I don’t think keeping things divided is the solution; it has to be a one state that is all Palestinian.”

Not all protesters were of Palestinian descent. Ralph Perfetto, a Bay Ridge activist, referred to the map in the back of his Bible that referred to the land in dispute as belonging to Palestine during the time of Christ. “I am ashamed of silent Christians,” he said.

Perfetto also spoke to his displeasure with the current administration, calling out Nikki Haley, the United States’ U.N. ambassador.

“Nikki Haley does not speak for all Americans,” he said.

The protest and subsequent march were centered around the hopes of the Palestinian people both in Bay Ridge and around the world to return to the home that they believe were stolen from them.

“Thank God we are American, but our hearts are there in the Holy Land,” Jaber said.

Brandon Sapienza is a writer for the Brooklyn Reporter.