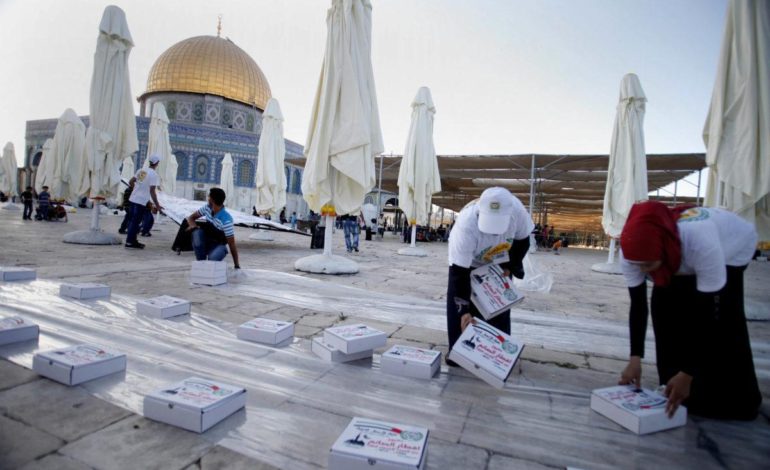 Volunteers prepare for the Iftar meal, provided as donations, at al-Aqsa mosque compound in the old city of Jerusalem, on July 17, 2013 - APA images

WEST BANK — Jerusalemite activists have launched a hashtag on Twitter – #we are not hungry – as a rejection of Ramadan meals provided by the UAE for visitors to Al-Aqsa Mosque. They argue that the Gulf State is consorting with the Israeli occupation of Palestine, having sent a team of cyclists to participate in the international Giro d’Italia cycle race, which passed through occupied Jerusalem on the 70th anniversary of the Nakba.

According to Hebrew-language radio in Israel, the normalization of relations between the occupation state and the UAE is such that Minister of Communications Ayoob Kara has received an official invitation to visit the Emirates. The Israeli minister added that he is also expecting Gulf officials to visit Israel soon.

The Associated Press and the Washington Post reported earlier that the ambassadors of the UAE and Bahrain, Yousef Al-Otaiba and Abdullah Bin Rashed Al-Khalifa respectively, have already met Israeli Prime Minister Benjamin Netanyahu at a restaurant in Washington.

Bahrain also sent a team to take part in the Giro d’Italia event. Indeed, the government in Manama sent a delegation to Israel and conducted “provocative” tours in Jerusalem a few days after President Trump acknowledge Jerusalem as the capital of Israel last December.

Commenting on Trump’s announcement, Bahrain’s Foreign Minister called it a “side” issue.

“It is not useful to engage in a battle with the United States on side issues,” he tweeted. Palestinians called his statement “a model of cultural Judaization that has infected the minds of the perverts and Zionists.”