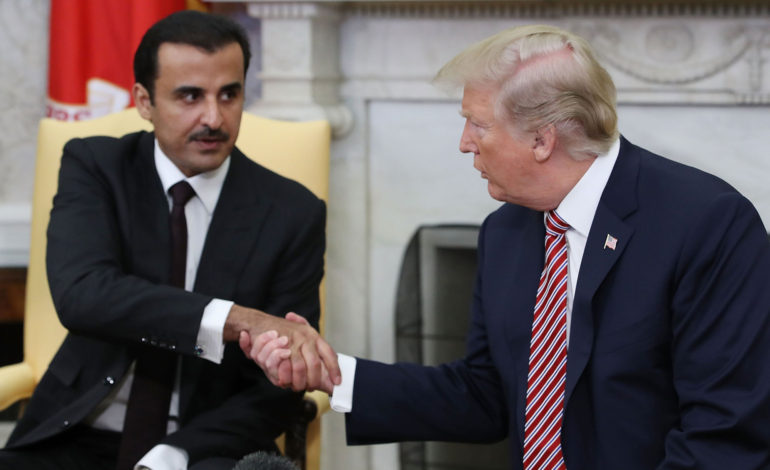 President Trump shakes hands with the emir of Qatar, Sheikh Tamim bin Hamad Al Thani, during a meeting in the Oval Office at the White House, on April 10 , 2018.

WASHINGTON — A pro-Israel businessman doing public relations work for Qatar donated $100,000 to the Zionist Organization of America out of money Qatar paid him to “invest” in “community engagement.”

Morton Klein, president of the Zionist Organization of America, told the Jewish Insider on Wednesday that he had been under the impression that the money came from Joseph Allaham, an owner of kosher eateries, not Qatar.

Klein said that if he determined the funds came from Qatar, he would return them.

Qatar paid Zionist Organization of America $100,000 through a pro-Israel businessman

Joseph Allaham, an owner of kosher eateries, said his donations to ZOA, a conservative pro-Israel group, came out of $1.45 million intended by Qatar to woo Jewish and other leaders to its side in its dispute with Saudi Arabia, Mother Jones reported. Allaham disclosed the payments in a filing last week to register as an agent of a foreign government.

Klein, in the past a sharp critic of Qatar, visited the country earlier this year at its invitation. He has said he used the visit to express his concerns about the country’s support for Hamas, its closeness to Iran and the hostility to Israel on Al Jazeera Television, the Qatari-backed TV network. He has insisted multiple times, including to JTA, that he received no compensation for the visit beyond travel expenses.

In his filing  Allaham said he also gave $100,000 to Our Soldiers Speak, a group that organizes U.S. speaking tours for Israeli military personnel, as well as $50,000 to Mike Huckabee, who visited Qatar. Huckabee, the former governor of Arkansas, is an evangelical preacher who is prominent in the Christian pro-Israel community.

Allaham is now denouncing Qatar as inimical to Israeli and U.S. interests.

Another prominent Jewish figure, Nick Muzin, an adviser to Republicans, also said recently that he was ending his paid lobbying relationship with Qatar, although, unlike Allaham, he did not denounce the country.

A source in Washington confirmed that broadcast of The Lobby – USA was indefinitely delayed as “a matter of national security” for Qatar. The source has been briefed by a high-level individual in Doha.

One of the Israeli lobby groups whose activities are revealed in the film has been mounting a campaign to convince the U.S. to withdraw its military forces from Qatar – which leaders in Doha would see as a major blow to their security.

Last April, managers at Al Jazeera were forced to deny a claim by a right-wing American Zionist group that the program has been canceled altogether.

In October 2017, the head of Al Jazeera’s investigative unit promised that the film would be aired “very soon.”

Eight months later, it has yet to see the light of day.

The film reportedly identifies a number of lobby groups as working directly with Israel to spy on American citizens using sophisticated data gathering techniques. The documentary is also said to cast light on covert efforts to smear and intimidate Americans seen as too critical of Israel.

Some of the activity revealed in the film could include U.S. organizations acting as front operations for Israel without registering as agents of a foreign state as required by U.S. law.

The latest revelation over the censored film shows how seriously Qatar’s leadership is taking threats from pro-Israel groups of repercussions should it air the film.

Qatar and Saudi Arabia are competing for influence in Washington

Over the past year or so, there has been intensive lobbying of the U.S. Jewish community by both sides in an increasingly acrid Gulf dispute between Qatar and Saudi Arabia, the United Arab Emirates and a number of other countries. Saudi Arabia has led a blockade of Qatar, ostensibly because of its Iran and Muslim Brotherhood ties.

The Trump administration has gone back and forth in the dispute. Saudi Arabia is perhaps the closest Arab ally to the United States, but Qatar houses one of the largest U.S. military bases.

A number of Jewish figures have landed noticeably on one side or the other, and prominent figures have visited the country. Along with Klein, they include Malcolm Hoenlein, the executive vice chairman of the Conference of Presidents of Major American Jewish Organizations, and Alan Dershowitz, a constitutional law expert and staunch Israel defender.

One figure caught up in the brouhaha is Elliott Broidy, a top Jewish giver to President Trump’s campaign. Broidy joined George Nader, an Arab American businessman, in making representations to the Trump administration on behalf of the UAE. He reportedly was involved in organizing an anti-Qatar conference last year put on by the Foundation for the Defense of Democracies, a think tank with pro-Israel ties.

Broidy has sued Muzin and Qatar, believing they hacked his emails, which led to the media reporting revelations such as his payment to an alleged mistress brokered by Michael Cohen, a lawyer who brokered similar payments for Trump.

Nader’s role in cozying up to the Trump administration is reportedly a focus of a federal investigation into improprieties by Trump’s campaign and presidency. Nader is cooperating with investigators.