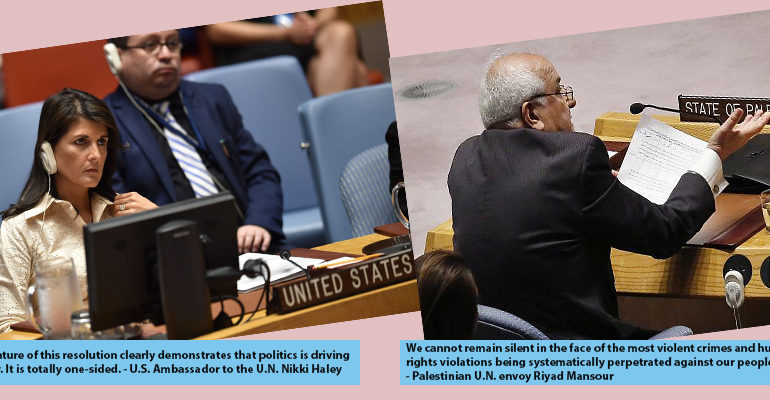 We cannot remain silent in the face of the most violent crimes and human rights violations being systematically perpetrated against our people. - Palestinian U.N. envoy Riyad Mansour

The General Assembly adopted a resolution with 120 votes in favor, eight against and 45 abstentions. It was put forward in the General Assembly by Algeria, Turkey and the Palestinian Authority after the United States vetoed a similar resolution in the 15-member U.N. Security Council earlier this month. 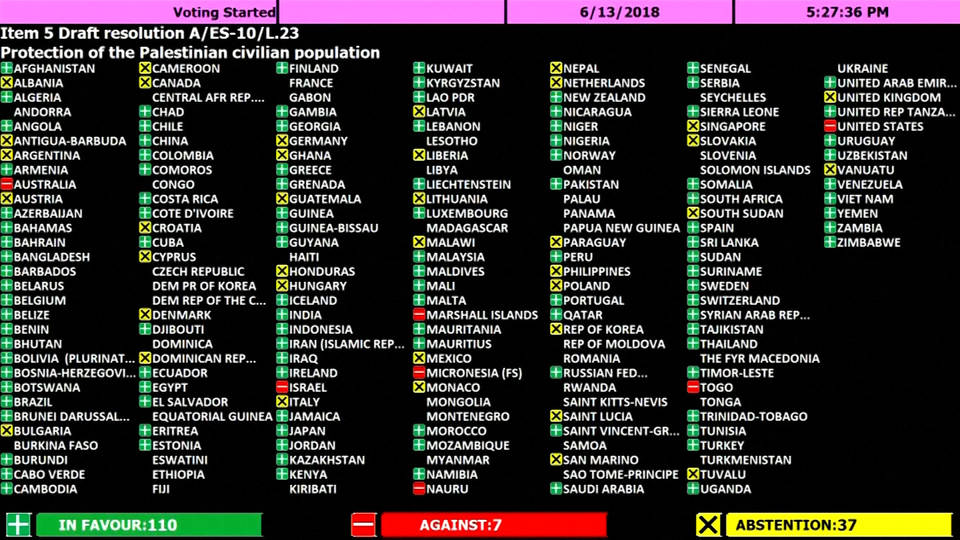 Voting board at the U.N. assembly hall

“The nature of this resolution clearly demonstrates that politics is driving the day,” U.S. Ambassador to the United Nations Nikki Haley told the General Assembly before the vote. “It is totally one-sided. It makes not one mention of the Hamas terrorists who routinely initiate the violence in Gaza.”

The United States failed in a bid to amend the resolution with a paragraph that would have condemned violence by Hamas.

Australia, the Marshall Islands, Micronesia, Nauru, the Solomon Islands and Togo joined Israel and the United States in voting against the resolution.

The Israeli military has killed at least 124 Palestinians and wounded 4,000 more since the Palestinians’ nonviolent Great March of Return protests began in Gaza on March 30. The largest number of deaths occurred on May 14, the day the United States moved its embassy in Israel to Jerusalem from Tel Aviv.

“We need protection of our civilian population,” Palestinian U.N. envoy Riyad Mansour told the General Assembly before the vote, adding that the resolution was “intended to contribute to a de-escalation of the volatile situation.”

“We cannot remain silent in the face of the most violent crimes and human rights violations being systematically perpetrated against our people,” Mansour said.

The resolution asked Guterres to report back within 60 days on proposals, “on ways and means for ensuring the safety, protection and well-being of the Palestinian civilian population under Israeli occupation, including … recommendations regarding an international protection mechanism.”

In December, 128 countries defied President Trump and voted in favor of a U.N. General Assembly resolution calling for the United States to drop its recognition of Jerusalem as Israel’s capital.