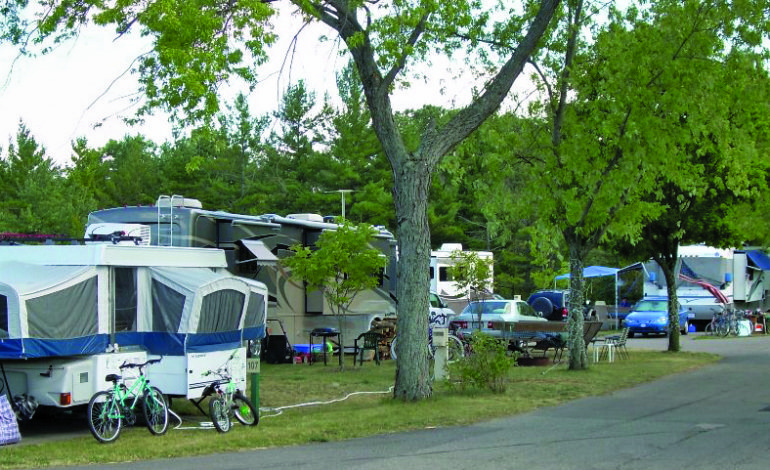 DEARBORN – To many residents’ satisfaction, the city won’t ask voters whether they want to sell a 40-acre parcel of land in Camp Dearborn that houses trailers to fund necessary infrastructure renovations.

Property and home owners are already paying hefty taxes, having to support a school district that includes a college, public transportation and now a millage levied either on property tax or water bills to fund a federally mandated project to separate sanitary sewer pipes from those of storm sewers.

During a special meeting on July 31, the Dearborn City Council faced a ruffled audience who echoed widely-held sentiments among residents: They’re sick of paying too much in taxes and many didn’t want to be forced to move their long-standing trailers to another site if the northwest 40-acre parcel was sold. That land sale would allow for the development of residential property to fund required infrastructure repairs and attract venture capital investment and other recreation programs in the city.

The 626-acre campground is located in Milford, but is owned and operated by the city of Dearborn. 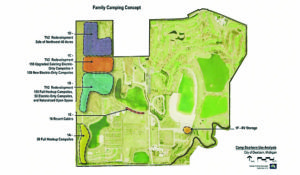 Camp Dearborn Map – Courtesy of the City of Dearborn

Residents feared that putting the question in the hands of voters would ensure the sale of the Camp Dearborn parcel.

A Recreation Department spokesperson said that department requested the City Council put the potential sale of the parcel on the November ballot and that many of the trailers haven’t been moved in more than a decade. The spokesperson also said laws require trailers to be movable.

About 200 trailers would need to be moved to an adjacent site, although 13 are up for sale. It would cost about $500 to move each trailer.

The spokesperson added that $1.2 million are needed for infrastructure improvements and $8 million to get asphalt up to city standards. However, Mayor Jack O’Reilly said the city didn’t have an estimate for the total cost it would take to meet the requirements. 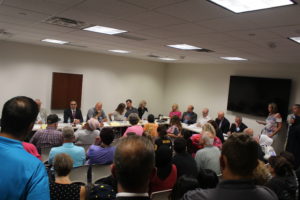 What sparked considering the sale, O’Reilly said, is that three years ago Michigan Department of Environmental Quality inspectors told the city the condition and size of many trailers were not in compliance with state standards. The MDEQ threatened to revoke the park’s camping license.

He added that some Milford residents living near Camp Dearborn want the campground gone. Some trailer owners, who are leasing the property, said the residents’ motivations might be racist, as many of the tenants are Arab Americans.

Councilman David Bazzy said the discussion to sell a portion of Camp Dearborn has been discussed by previous Council members, as its recreational zoning has depreciated its value.

“The only reason Camp Dearborn is not in further decline is we’re lucky enough that we found gas reserves and oil,” Bazzy said. “Those are the dollars that are supporting the camp today.”

Councilwoman Leslie Herrick was among those suggesting the possible sale of the land would be a way to fund the camp’s infrastructure upgrades.

“Without tax dollars being stretched and with taxpayers who feeling they are maxed out, if we can do anything to keep Dearborn self-sustaining, I would like to see that happen,” Herrick said.

Resident Hassan Abdullah expressed concern that property owners are being forced to pay to improve a campground from which they’ll be kicked out so it can be sold.

Some meeting attendees also questioned why the city would spend money to open Michigan’s longest zip-line, when the campgrounds need upgrades.

Dearborn Heights resident Zuhair Abdelhak pressed the Council to, “think outside to the box to pay for the upgrades and keep those memories for people who lived here all their lives and [the land] an outlet for people to enjoy themselves with their families.”

Ultimately, attendees said it was premature for the Council to ask residents to vote on selling the land before it had any assurance the land could be rezoned and before finding another property to which to move the trailers.

In the end, none of the Council members agreed to move on putting the measure for the land’s sale on the ballot.

Councilman Mike Sareini told The AANews that since talk of selling the property began in April, several steps, like getting an appraisal, needed to be done before a sale took place.

“I don’t believe you can sell land without doing your due diligence,” he said. “I felt that it was extremely premature and rushed.”

He added that the city received a rough estimated appraisal on the land about two hours before Tuesday’s meeting.