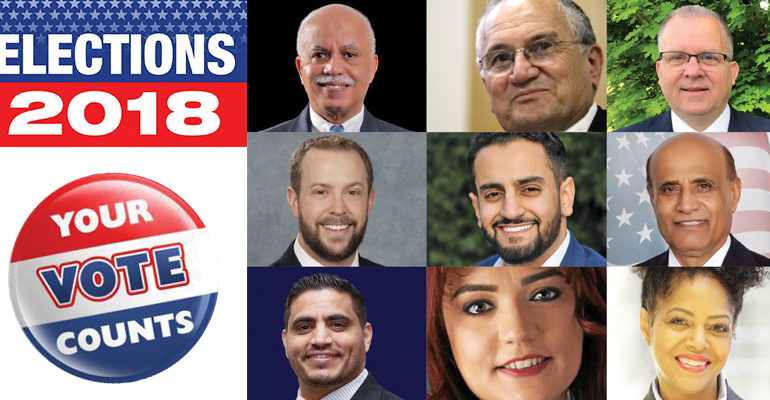 The Arab American News editorial board met again to consider the following nine races and to select the candidates they believe will best serve both the community and the people of Michigan at large, based on their campaign positions. When considering candidates, the board researches their backgrounds and conducts one-on-one interviews if necessary. The main focuses of the research is whether a particular candidate has the ability to serve his/her constituents and their relationship with the Arab American community.

Since taking office four years ago, Wayne county Executive Warren Evans has saved the county from bankruptcy, successfully working with the state through a consent agreement and taking the county from a deficit to a surplus. Under his leadership, Wayne County has seen a surge in economic development projects and the approved sale and transfer of two major sewer systems to local communities, which will result in $65 million in proceeds to reduce pension and OPEB liabilities. Evans turned the failed jail project around and delivered a project that will result in the construction of a $533 million criminal justice complex.

Among all this and more, he maintained one of the most diverse and inclusive administrations the County has ever seen, with a significant number of personnel from the Arab American community serving in executive level positions. He has worked hard to restore trust and integrity in Wayne County government and deserves to be re-elected for another term.

Al Haidous was elected Wayne County Commisioner in November 2014 to represent the 11th District, which covers the cities of Belleville, Romulus and Wayne, part of Westland and Huron, Sumpter and Van Buren townships.

Haidous served as mayor of Wayne from 2001 until his elected to the County Commission. During his tenure as mayor, the city found ways to save money, including merging the Fire Department and Parks & Recreation Department services with the neighboring city of Westland and consolidating public safety dispatch with the cities of Westland and Inkster.

Prior to that, Haidous served on Wayne City Council from 1993 to 2001 and the Board of Zoning Appeals from 1990 to 1993. He is a proud Arab American and the Arab American community is proud of his involvement and services to the residents of Wayne County. On August 7, re-elect Al Haidous to the Wayne County Commission.

Five-term Garden City Mayor Randy Walker is running for the Michigan House of Representatives in the 11th District, which includes Garden City and Inkster, along with parts of Westland, Livonia and Dearborn Heights. After a stint on the City Council, Walker, 60, served four two-year terms as mayor before being elected unopposed last November to a four-year term after voters approved a longer mayoral tenure. After his retirement at 59 from Ford Motor Company, Walker, a Democrat, decided to challenge former Inkster City Councilman and current State Rep. Jewell Jones (D-Inkster), who is completing his first term.

Jones has a string of traffic violations with local and state police going back to June 2017. In the course of one year, Jones was stopped nine times. On July 18, he was stopped by the Michigan State Police on I-94 in Dearborn for speeding and was cited with four tickets, including “open intoxicants in a vehicle’, according to log sheets obtained by a Michigan Information and Research Service (MIRS) report and released on August 1 that listed other violations. Jones is due in court in Dearborn on August 24 for arraignment.

Randy Walker is an experienced public servant and a dedicated leader in the private and public sectors. He served as Garden City’s mayor through the roughest economic downturns and worked to get the city through the economic doldrums. Now Walker feels he can do more to serve the district and be the voice of its residents in Lansing. He has real-life experience as mayor and as a manager at Ford.

When Saad Almasmari made history in Nov. 2015 by receiving the most votes in the Hamtramck City Council race— making it the first City Council with a Muslim majority in the U.S— he pledged to ensure proportional representation and said the city would handle resources well enough to move on from emergency management.

More than two years later, Hamtramck is no longer under emergency management and the 33-year-old Yemeni American businessman wants to serve everyone with a stake in the State House’s Fourth District, which encompasses Hamtramck and includes part of Detroit.

Hamtramck is home to one of the largest concentration of Yemeni Americans, at 30 percent, and is also known for being one of the most ethnically and religiously diverse cities in the country. According to the 2010 Census, 41 percent of the city’s 22,000 residents are foreign-born.

In addition to the Yemeni community, Hamtramck is also home to large populations of Bangladeshis, Poles and African Americans.

Almasmari now seeks to continue serving his constituents as a state representative. He is ambitious and a team player. His record on the Hamtramck City Council is impressive and consistent. He is very concerned about the high insurance rates impacting the district’s residents as well as the rising healthcare cost for the underserved. He believes in strong public schools that are clean, healthy and safe for all students. He will work hard with others in Lansing to rebuild the state’s crumbling roads and bridges.

Almasmari is running to replace term-limited State Rep. Rose Mary Robinson (D-Detroit). He is competing for the seat against 13 other contenders. On August 7, vote for Saad Almasmari.

Asmaa Alhasani, a pharmacist since 2010, is running for Michigan’s 13th House District which includes part of Dearborn Heights, Allen Park and Southgate. She is a business owner and a real estate investor. Alhasani worked as a human right activist for 15 years in interfaith organizations. Her campaign focuses on affordable education, healthcare, fixing roads and lowering income taxes. She is running against State Rep. Frank Liberati (D-Allen Park), who is seeking a third and final term in office.

On August 7, give Asmaa Alhassani your vote and the chance to serve the district.

Karen Whitsett is running for the state house seat in the Ninth District, which includes portions of Dearborn and Detroit. In Dearborn, her name will appear on ballots in precincts 3, 5 and 9. She is running to replace State Rep. Sylvia Santana (D-Detroit), who is seeking a seat in the state senate.

Her campaign is focused on lowering auto insurance rates, improving public schools, healthcare for all and economic development in her district.

She has been endorsed by State Rep. Abdullah Hammoud (D-Dearborn) as a good partner in Lansing for her community activism, “tenacity for getting things done” and grassroots campaigning and door knocking.

On August 7, vote for Karen Whitsett.

State Sen. David Knezek (D-Dearborn Heights) is seeking the nomination for a second term to the Fifth District in the August 7 primary. The district includes Dearborn Heights, Garden City, Inkster, Redford Township and part of Detroit. Knezek, a former state representative has been a close friend of the Arab American community going back to when he was in high school.

During his first term as state senator, Knezek secured millions in funding for the Arab American National Museum, the Charles H. Wright Museum of African American History and the Henry Ford Museum. He also passed an amendment to put more than $100 million back into the School Aid Fund, passed legislation that eliminated Driver Responsibility Fees, built five new veterans homes in Michigan, invested $200 million into Michigan veterans and created more than 1,000 jobs, and expanded Michigan’s statute of limitations to protect survivors of sexual abuse in the wake of the Dr. Larry Nassar scandal. Knezek also introduced legislation to eliminate the pension tax. He has an open door policy for all his constituents. Knezek is a rising leader in the Democratic Party.

On August 7, re-elect Senator David Knezek and send him back to Lansing.

At a time when we can be so cynical of our government, having leadership that you can trust will put people first is critical to restoring faith in our politics. Aiyash will fight corruption, cronyism and corporate comfortability. His leadership approach is to be progressive and collaborative, thoughtful and pragmatic. But that starts with restoring people as the central theme of our politics.

Aiyash believes Lansing needs to be honest about the challenges ahead, accountable for the solutions presented and transparent about how we address these challenges. He will be the first public official in Michigan’s history to directly disclose his voting record and campaign finances on his website, as well as his personal finances, in an attempt to lead the effort for a more transparent government.

Dr. Ghulam Qadir of Northville Township, former chief of psychiatry at Oakwood Healthcare System and current CEO of Apex Behavioral Health Dearborn PLLC, is seeking to represent the Seventh District, which includes the cities of Livonia, Northville, Wayne and Plymouth and the townships of Canton, Plymouth and Northville, in the State Senate. The district is currently represented by State Sen. Patrick Colbeck (R-Canton), who is running for governor.

Qadir is no stranger to Lansing. He served as vice chairman of the Controlled Substances Advisory Commission for the state of Michigan for four years; he participated in the passage of the Michigan Patient Bill of Rights and he was instrumental in removal of punitive provisions in the Michigan Mental Health Code, which affected the practice of psychiatry, pharmacy and nursing professions. Outside the workplace, Qadir has been active as a volunteer at the professional and community level.

Qadir will be a perfect addition to the state senate in Lansing. On August 7, vote for Dr. Ghulam Qadir.

Get involved, be a true American citizen

Teddy Roosevelt wrote an essay in 1883 on what it takes to be a true American citizen.

“The people who say that they have not time to attend to politics are simply saying that they are unfit to live in a free community,” he wrote. “The first duty of an American citizen, then, is that he shall work in politics.”

Living in a representative democracy demands work from all of us. The chances of effecting change grow as you learn and get involved. If you see something that you need to change, do something to change it; get involved. Nothing is more important than voting to protect our democracy and maintain a civil society. Our democratic system depends on citizens making choices on politicians and issues. If you don’t, you will be leaving those important decisions to other people to make for you. It is high time to act and be involved. For the Arab and Muslim communities who have been under attack increasingly for the last two decades, the time is now to act and the place is at the polling stations. Vote and make your choices on August 7.