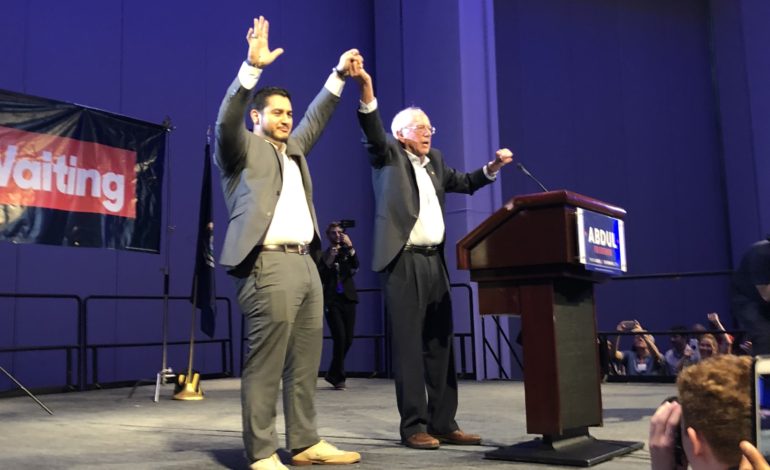 DETROIT — Over the weekend, just days before Michigan’s primary election, U.S. Senator Bernie Sanders  (I-VT), campaigned for Dr. Abdul El-Sayed, the progressive Democratic gubernatorial candidate. Sanders and El-Sayed attracted more than 1,400 people at a rally held at Cobo Center in downtown Detroit Sunday afternoon.
El-Sayed addressed an enthusiastic crowd preceding Sanders’ speech, speaking about his own experience as the former executive director of the Detroit Health Department, which lead to his understanding of many systemic issues in Michigan.
He told the crowd he thinks the United States’ political culture is falling apart.
“We’ve been paralyzed by a culture of fear that tells us that we can’t see eye to eye with people who see the world differently than we do,” El-Sayed said. “We retreat to our own echo chambers where everybody looks, sounds and acts and tweets just like we do.”
He also said he believes 2018 is the year with the opportunity to “move beyond those divisions and recognize the humanity that binds us together” and “build the kind of government that builds for the rest of us.”
As he spoke in the Cobo Center ballroom, El-Sayed stood in front of a banner bearing the hashtag “#donewaiting.”
“I’m done waiting while people all over the state are told that they don’t belong,” he said, “excised out of our politics, told that they’re less-than because of what they look like, the color of their skin, how they pray, who they love, where they come from or who their parents are.”
As Sanders began to speak, the cheering crowd assembled closer to the stage and took photos and videos with their phones.
Sanders told them he supported El-Sayed’s agenda because he believes it is a popular one, not a radical one.
“It is an agenda that speaks to my heart,” Sanders said. “It is an agenda that speaks to the needs and dreams of working people in this state and around the country.”
He addressed the great need for wage growth, pay equality for women and women’s rights to have “control over their own bodies.”
Sanders declared there was no better candidate than El-Sayed to lead the nation in a medicare-for-all program; and that it is long overdue for the United States to make health care a right, rather than a privilege.
“How does it happen that in our great nation that we are so proud of,” he asked, “that we remain the only major country on Earth that does not guarantee health care to all people as a right? The function of health care is not to make huge profits off the back of working families.”
Sanders also addressed El-Sayed’s ambition to invest in Michigan’s college students, an issue he said he’s been working on for many years.
“This nation will never live up to its potential,” he said, “will never be effective in competing in the global economy when so many of our young people are unable to afford a higher education or are leaving school deeply in debt.”
Sanders and Alexandria Ocasio-Cortez, a New York Congressional candidate, both endorsed El-Sayed’s run as a fellow Democratic-Socialist in hopes of propelling him to victory in the few weeks before the primaries.
At the rally, Sanders cited his own race in the 2016 Michigan presidential primary, in which he was down 27 point in the polls the previous day.
“I understand there has been some discussion here in Michigan about the polling and the fact that Abdul is behind on some of the polls,” he said. “So let me give you the personal perspective. Well, we won that election. And by the way, so will Abdul.”
Sanders’ confidence in El-Sayed’s win was overhasty, as even with the support of primary-successful progressive candidates, El-Sayed lost to Gretchen Whitmer in the Democratic primary on Tuesday, Aug. 7.