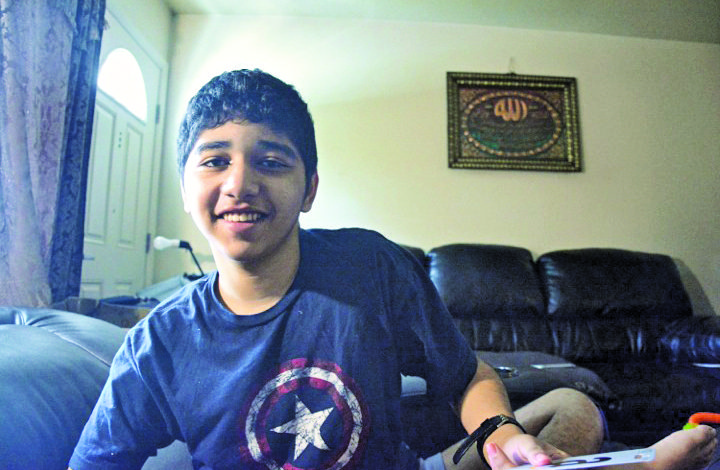 ANN ARBOR — An Arab American mother of four continues her search for support for her family and terminally-ill son while spreading awareness of his rare condition.

In May, The AANews met with Azeza Kasham and her 15-year-old son Haitham Breadiy, whom doctors had diagnosed with a genetic form of progressive myoclonus epilepsy called Lafora Body Disease in April of 2017.

Since his diagnosis, Haitham saw rapid worsening of his condition, losing the ability to walk or speak in complete sentences.

“He’s still deteriorating,” Kasham said. “This disease has been so hard on my family.”

She said Haitham’s seizures, which tire him immensely, have increased at least five times what they were when The AANews interviewed her in May. Before, he had about one grand mal seizure a week. Now he experiences the seizures in sets of five within a 24-hour period. He’s also had more trouble eating, and often uses a nasogastric tube, which passes via his nose through the esophagus to his stomach to deliver nutrients.

Previously, Kasham told The AANews that in her search for help she’d even been turned away by a mosque. Officials there suggested she make amends with her parents and ask them for assistance. She said that rejection made her feel isolated from her community.

“I don’t have a mom or dad,” she said in May. “I don’t have anybody. My parents were very abusive to me growing up. They don’t even care [about Haitham.]”

Kasham said she found some support from a source she didn’t expect: The First Presbyterian Church of Northville, where the senior pastor, Rev. Dr. Robert Allen, is helping her arrange a golf outing fundraiser for Haitham, which will take place in October.

“He’s really helped spread the word about Haitham,” Kasham said. “Seeing how much he really cared about my family, and it wasn’t about religion, it really shows me there’s a better part of humanity.”

“We’re not moving the Earth or anything, but we continue to help where we can,” Allen told The AANews regarding his work with the family. “It’s more than just helping out, I just consider them a part of our family now.”

“We’ve had some donations to our Go Fund Me page, which have been greatly appreciated,” Kasham said. “Our other fundraisers have been just complete disappointments.”

“You have to drive participation and visits to [Go Fund Me] to really see a lot of benefit from it,” Allen said.

He also said he thinks his parishioners don’t see a distinction between Presbyterian or Muslim and that he even uses the Koran in his own services at his church to “show the connection between the two faiths.”

“I think for the folks here, they just see it as helping out another human being,” he said.

Allen explained that from what he sees, shelters, food pantries and churches are overrun with need these days.

“It seems like there’s a giving fatigue,” he said. “If you’re not a part of a huge organization that has great marketing and huge celebrities, speakers, someone to pitch for you, it’s really hard to get anything.”

“Children with this disease,” Kasham said, “their parents are left to advocate alone because nobody ever hears of it.”

She said she still hopes to get Haitham to UCLA, where specialists are developing a clinical trial drug by studying children with Lafora. She sees this as an opportunity not only for her own son, but for future children diagnosed with Lafora.

“Right now it’s my child,” she said, “but I want to open up a foundation for children with rare diseases like my son’s.”

Allen said he’s also seen Haitham’s condition dissipate since he first met him, but that Haitham still maintains a “glow around him.”

“He’s just a young man in the middle of all this mess,” he said.

Kasham said she worked just once a month in order to keep her position at St. Joseph Mercy Hospital, but now she’s given up working in order to care for her son and spread awareness of his disease.

“[Kasham] has been tireless in talking to people and trying to highlight Haitham’s condition,” Allen said. “She has been an incredible strength in all of this. She just does not say no; she will not quit.

For more information or to RSVP for the Heroes for Haitham golf outing on Oct. 21, email azezabreadiy@hotmail.com.

Tickets cost $150 and includes a scramble golf tournament, a lunch buffet and a raffle ticket for various prizes.

To donate to the Breadiy family’s Go Fund Me page visit www.gofundme.com/jessicanovakov.