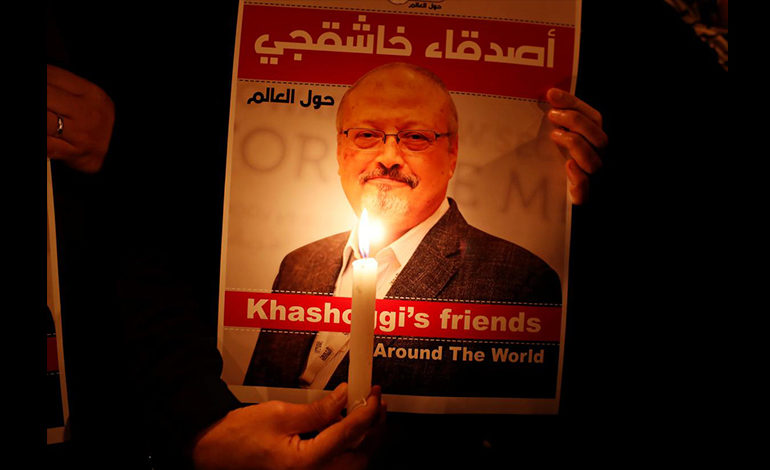 A demonstrator holds a poster with a picture of Saudi journalist Jamal Khashoggi outside the Saudi Arabia consulate in Istanbul, Turkey October 25. REUTERS

Saudi Arabia’s public prosecutor said on Thursday the killing of journalist Jamal Khashoggi in the kingdom’s Istanbul consulate this month was premeditated, reversing previous official statements that the killing was unintended.

The death of Khashoggi, a Washington Post columnist and critic of de facto Saudi ruler Crown Prince Mohammed bin Salman, has sparked global outrage and mushroomed into a crisis for the world’s top oil exporter and strategic ally of the West.

The Saudi disclosure came after CIA Director Gina Haspel heard an audio recording of the killing during a fact-finding visit to Turkey this week. The spy chief was due to brief President Trump about Khashoggi on Thursday.

Saudi officials initially denied having anything to do with Khashoggi’s disappearance after he entered the consulate on Oct. 2, before changing the official account to say an internal investigation suggested he was accidentally killed in a botched operation to return him to the kingdom.

On Thursday, Saudi state TV quoted the Saudi public prosecutor as saying the killing was premeditated and that prosecutors were interrogating suspects on the basis of information provided by a joint Saudi-Turkish task force.

“Information from the Turkish side affirms that the suspects in Khashoggi’s case premeditated their crime,” said the statement carried by state TV.

Turkey and Western allies of Riyadh have voiced deep skepticism about Saudi explanations of the killing.

Turkish officials suspect Khashoggi, 59, was killed inside the consulate by Saudi agents and his body cut up. Turkish sources say authorities have an audio recording purportedly documenting the murder.

Pro-government Turkish newspaper Yeni Safak, citing the audio, has said his torturers cut off his fingers during an interrogation and later beheaded him.

The CIA’s Haspel heard an audio recording of Khashoggi’s death during a trip to Turkey this week, sources told Reuters. It was not clear what could be heard. Representatives for the CIA and Turkish intelligence declined to comment.

It was the first indication Ankara has shared its key investigative evidence.

“We have shared with those who sought additional information some of the information and findings that the prosecutor has allowed us to share,” Turkish Foreign Minister Mevlut Cavusoglu told reporters, without giving details.

Trump, the kingdom’s staunchest Western ally, was quoted by the Wall Street Journal as saying Prince Mohammed bore ultimate responsibility for the operation that led to Khashoggi’s death.

How Western allies deal with Riyadh will hinge on the extent to which they believe responsibility for Khashoggi’s death lies directly with the prince and the Saudi authorities.

German Chancellor Angela Merkel condemned the killing in the strongest terms possible during a phone call with King Salman and vowed to take appropriate measures in response, the chancellery said.

Saudi Arabia has detained 18 people and dismissed five senior government officials as part of the investigation into Khashoggi’s murder. Some were members of a 15-man hit team, many of them Saudi intelligence operatives, who flew into Istanbul hours before Khashoggi’s death, Turkish security sources say.

Turkish police were investigating water samples from a well at the consulate on Thursday after initially being denied access, broadcaster CNN Turk said.

King Salman, who has delegated the day-to-day running of Saudi Arabia to the crown prince, ordered a restructuring of the general intelligence agency on Saturday.

Saudi state news agency SPA said on Thursday that Prince Mohammed had presided over the first meeting of a committee to carry out that restructuring.

The prince promised on Wednesday the killers would be brought to justice, his first public comments on the matter.

Khashoggi’s eldest son Salah and his family arrived on Thursday in Washington on a flight from Saudi Arabia, according to two sources close to the family. One source said Salah Khashoggi holds dual U.S.-Saudi citizenship and had been under a travel ban. 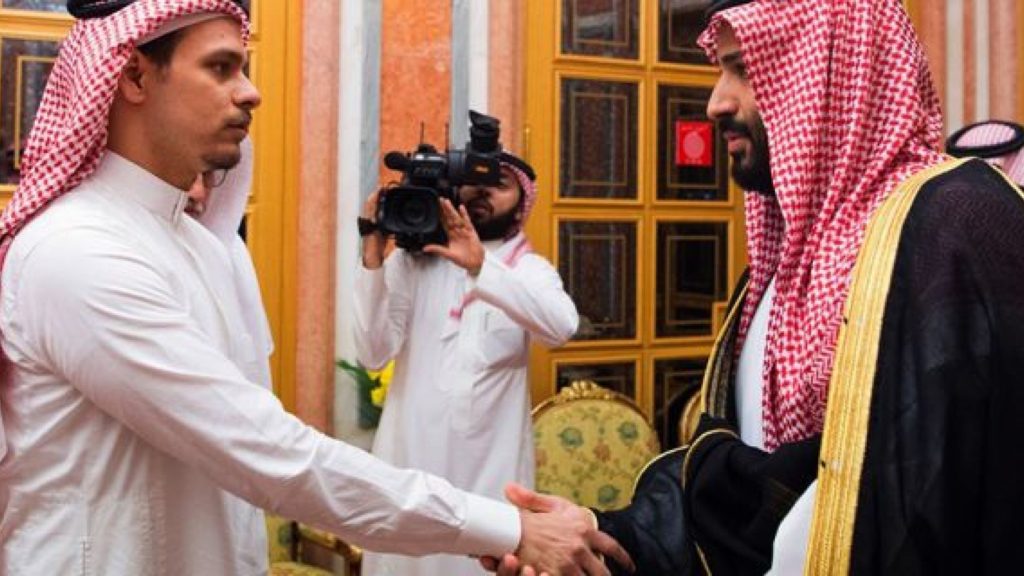 This week he held a meeting at the al Yamama Palace in Riyadh in which he and other family members received condolences from King Salman and the crown prince.

A photograph of the meeting showed Salah staring coldly at the prince as the pair shook hands.

Dozens of people gathered outside the Saudi consulate in Istanbul on Thursday in a vigil to demand justice. Several carried cardboard images of Khashoggi’s face and signs reading “Khashoggi’s friends.” One, his hands painted red, wore a mask depicting the face of Prince Mohammed.

Saudi Arabia is the lynchpin of a U.S.-backed regional bloc against Iran, but the crisis has strained Riyadh’s relations with the West. Dozens of Western officials, bankers and company executives shunned a big investment conference in Riyadh this week.

But striking a defiant tone, the crown prince told international investors at the three-day conference on Wednesday that the furor would not derail the kingdom’s reform drive.

“We will prove to the world that the two governments (Saudi and Turkish) are cooperating to punish any criminal, any culprit and at the end justice will prevail,” he said to applause.

On Thursday, Saudi Arabia’s King Salman spoke with Russian president Vladimir Putin by telephone to brief him on the investigation into Khashoggi’s murder, according to the official Saudi press agency.

The king assured Putin the Saudi government was determined to hold the guilty parties accountable and to make sure “they receive their punishment.”

The Kremlin confirmed in a statement issued on Thursday that Putin and King Salman had addressed the situation related to the “Khashoggi case” during their phone conversation.

They also discussed the situation in Syria and questions related to mutual cooperation between Russia and Saudi Arabia, including the energy sector.

The Saudi king confirmed his invitation to Putin to visit Saudi Arabia, the Kremlin added.

Turkey: No intention to take the case to international court

In a move that signals a deescalation between the two nations, Turkey’s foreign minister said  that his country has no intention of taking the case regarding Khashoggi’s murder to an international court, but would share information if an international investigation was launched.

Mevlut Cavusoglu made the comments during a news conference with Palestinian Foreign Minister Riyad al-Maliki. He also said Turkey had shared information with some parties who sought additional information.

On Wednesday, British Prime Minister Theresa May told King Salman that his country’s explanation for the murder of Khashoggi in Turkey lacked credibility, her office said.

“The prime minister said the current explanation lacks credibility, so there remains an urgent need to establish exactly what happened,” a Downing Street spokesperson said in a readout of a call between May and King Salman.

“She strongly urged Saudi Arabia to cooperate with the Turkish investigation and to be transparent about the results. It is important that the full facts are established.”