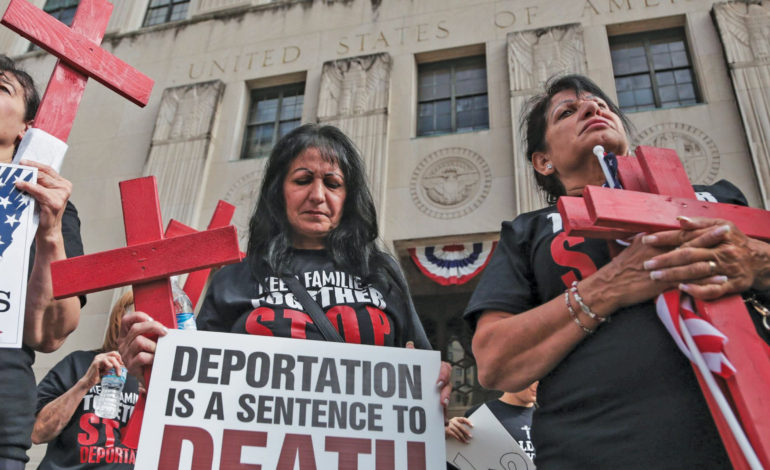 Ikval Marogi (R) and Elham Mona (C) listen to a speaker as families of Iraqi immigrants from Metro Detroit who were detained by ICE gather outside of the federal courthouse in downtown Detroit, Thursday, August 31, 2017 - Photo by Detroit Free Press

DETROIT — Per the request of the American Civil Liberties Union of Michigan, U.S. District Judge Mark A. Goldsmith ordered U.S. Immigration and Customs Enforcement to unseal secret documents that show ICE’s prior statements to the court.

ACLU attorneys appeared before Judge Goldsmith on Wednesday, Oct. 24 to argue for immigration authorities’ release of more than 100 Iraqi nationals who have been detained since June 2017.

“We are delighted that the detainees, their families and the public, all of whom deserve to know the truth, will finally be able to learn what is really happening in this case,” ACLU senior staff attorney Miriam Aukerman said in a statement before the hearing Wednesday. “Now everyone can see the evidence for themselves.  And what that evidence shows is that ICE provided false information to the Court in order to keep these Iraqis locked up, separated from the families, for the past 16 months.”

The ACLU requested sanctions against ICE for submitting prior false statements to the court, which resulted in continued detention of the Iraqis.

According to the ACLU’s press release on Oct. 23, the recent ruling by Judge Goldsmith is the latest development in Hamama v. Adduci, the nationwide class action filed in June 2017 on behalf of hundreds of Iraqi nationals who were arrested and threatened with immediate deportation.

The lawsuit argues that many of the Chaldean Christian Iraqis would face persecution or death if they returned to Iraq.

“The purpose of immigration detention in this case is to break people’s spirits,” Aukerman said, “to make them give up their cases and agree to go to a country where they’re likely to be persecuted, tortured or killed. It’s solely to separate them from their families, to leave the country which for many of them is the only one they’ve known since they were children. It’s a horrible choice that people are being forced to make, between indefinite detention here and removal to country where death may await.”

Aukerman said the ACLU asked for their release because, “their incarceration was founded on lies and blatant misrepresentation to the court.”

She said ICE was caught red-handed.

“The issues on the table were honesty and freedom,” Aukerman told The AANews. “ICE lied to the court. Individuals are supposed to be released if the country that they’re supposed to be expatriated to won’t take them back. ICE knew that it could not return these individuals and told the court that there was an agreement for the return.”

Aukerman said that when the ACLU approached the court for the release of the detainees about six months after their incarceration, ICE responded with a sworn statement that Iraq did plan to receive them.

“It turned out that was just lies,” she said. “We didn’t know it at the time. But when we saw the documents we saw that they were providing false information to the court.”

ICE attorney Joseph Darrow told the court Wednesday that delays are either results of court orders or difficulties obtaining travel documents. He said ICE plans to remove those with appropriate travel documents and plans to deport some Iraqis by the end of November.

ICE also denied making any falsehoods to the court.

“Under our Constitution, we don’t lock people up indefinitely and throw away the key,” Aukerman said. “People are only locked up for a reason. Typically that’s because they’re locked up for punishment, but with immigration people are supposed to be in detention for a short time until they can get the documents together and get them on a plane to leave the country.

“It’s incarceration without trial,” she added. “We were very hopeful that the court understood that, being 16 months into this case.”

She also said these are people under orders of supervision and reporting regularly to ICE.

“There’s absolutely no reason they should be locked up this long,” she said. “We are very hopeful that at long last these families will get to be reunited and the individuals will be able to return home after this much time. We very much hope [Judge Goldsmith] will reunite these families who have been separated for far too long.”

Judge Goldsmith did not issue a ruling at the hearing on Wednesday.