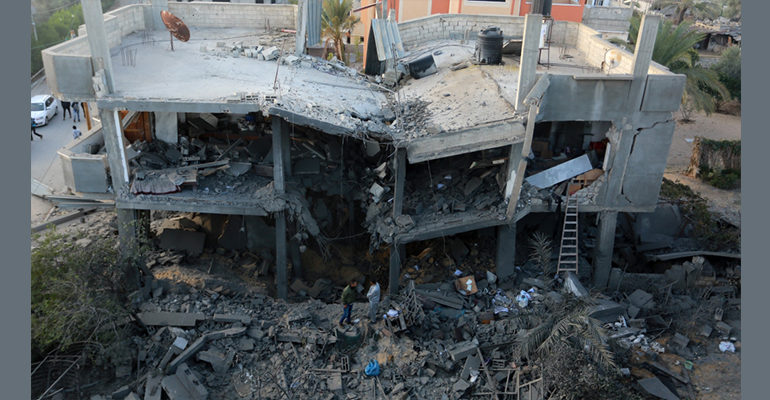 GAZA — Ahmed Abu Saif struggles to maintain a straight face as he looks at the amorphous pile of rubble of what used to be a five-story building he owned.

The structure is one of the several civilian sites that have been flattened over the past 24 hours in Gaza as Israeli jets pounded the besieged and densely-populated coastal enclave amid rising tensions.

“I expected to see my building burned to the ground one day, simply because I live in Gaza,” the 64-year-old owner of the al-Rahma building, told Al Jazeera on Tuesday.

“Everything in Gaza is a target, regardless of who it belongs to,” he said. “The occupation does not differentiate. To them, a Palestinian is a Palestinian.”

On Tuesday, the armed wing of Hamas, the group that administers the Gaza Strip, warned it would increase attacks and fire rockets at the Israeli towns of Ashdod and Beersheba if Israel continues to carry out air raids on civilian buildings.

The statement by al-Qassam Brigades was released hours after a rocket from Gaza killed an Israeli man in the coastal town of Ashkelon.

At least seven Palestinians have been killed in Israeli attacks since late on Monday, in the worst flare-up of violence between the two sides since the 2014 Israeli assault on the Strip.

The escalation came after at least seven other Palestinians were killed on Sunday in a covert Israeli operation, to which Hamas responded with rocket fire from Gaza. One Israeli soldier was also killed in the undercover raid near Khan Younis. 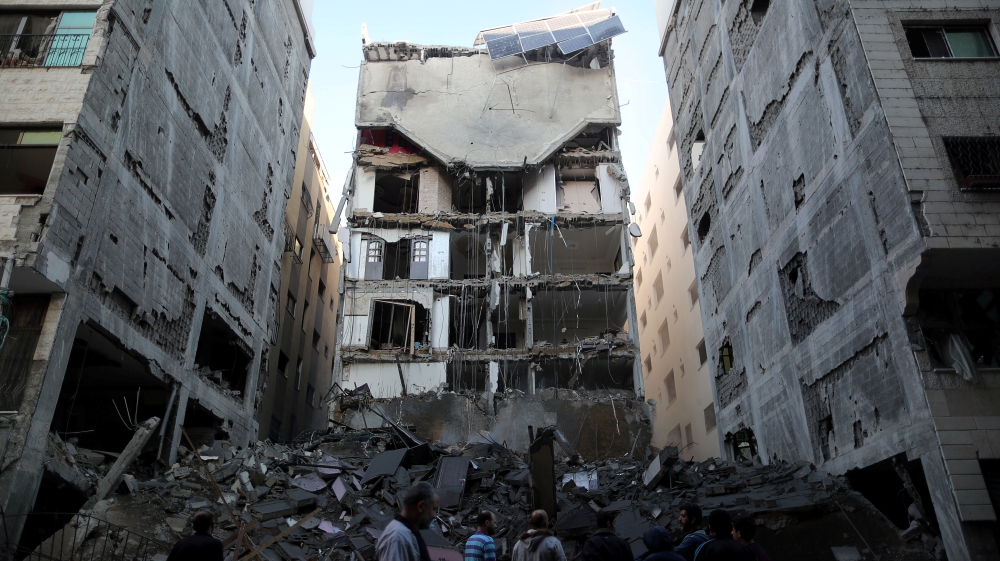 Ahmed Nasser: “We had no idea this building would ever become a target.” -Photo by Reuters

It also had a kitchen leased by Nayef al-Madhoun, a 45-year-old father of six who ran a catering business.

“Some people rang me [on Monday night] and told me that the building had been hit by an F-16 fighter jet,” al-Madhoun told Al Jazeera on Tuesday.

“I came running from my home, which isn’t too far from here, and found that the building had been bombed to the ground,” he said, standing before the mass of twisted metals, cement blocks and scraps of wood.

Al-Madhoun said there was “nothing” in the building that would have posed as a threat to the Israeli army.

Abu Saif, the owner, does not think he will ever manage to rebuild al-Rahma.

Following the first round of warning sirens, he was contacted by people in the area who informed him of the looming attack.

But he refused to rush over.

“Whether I showed up or not last night, the outcome would have been the same,” Abu Saif said, his voice breaking.

He had hoped this building would help him live his last days as a retired man.

“I used to live and work in Saudi Arabia for 40 years,” he said. “I had spent all my savings and invested in building this place so that I could have a sustained income to see me through my retirement years.”

The Israeli army has over the past few days enhanced its deployment along the fortified fence bordering Gaza, which has been under a crippling Israeli and Egyptian-imposed blockade, now in its 12th year.

The latest round of fighting comes in a period where both Hamas and Israel seemed to have moved closer to a truce amid mediation efforts by Egypt, the United Nations and Qatar.

As air raids continued on Tuesday, residents of bombarded sites in Gaza said they were targets of “indiscriminate attacks.”

“We had no idea this building would ever become a target,” Ahmed Nasser, a resident in a seven-story residential structure, told Al Jazeera.

He said doctors, pharmacists and engineers, all stripped of “political affiliations”, were residing in the building in central Gaza.

Among those who had to immediately evacuate, Nasser said, were a mother with a newborn baby and an elderly woman in a wheelchair, screaming in terror as they ran out with just the “clothes on their back.”

“They all started evacuating the building after hearing the sirens, but halfway through Israeli jets started firing towards the area,” Nasser said from the scene of the attack.

Nasser, a father of two, said he had lost more than the walls sheltering his family.

“I couldn’t save my college and master’s certificates,” Nasser said. “Even my passport and official documents are now gone.”

Like many in the besieged enclave, home to more than 2 million people, Nasser is unemployed due to Gaza’s dire economic conditions.

The siege has devastated the local economy, severely restricting food entry and access to basic services. It has also stopped the flow of construction materials needed to rebuild much of the enclave’s damaged infrastructure.

Since March 30, Palestinians in the Strip have been protesting along the fence with Israel, demanding their right to return to the homes and land their families were expelled from 70 years ago.

The protesters are also demanding an end to Israel’s blockade.

Back in al-Rahma, al-Madhoun, the catering business owner, turned his gaze to the rubble as he started thinking about the future.

“This was my family’s source of income for the past three years,” he lamented. “Up until last night, I had 15 people working with me and this was also their source of income … We all just lost our livelihood.”