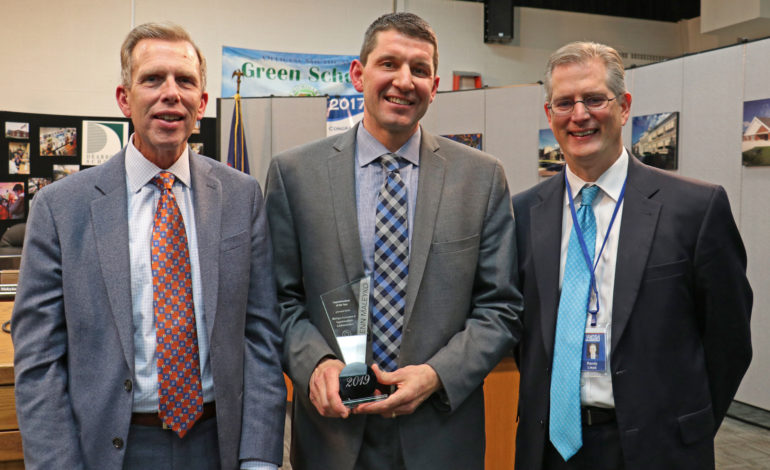 DEARBORN — Dearborn Public Schools Superintendent Dr. Glenn Maleyko has been named the Superintendent of the Year by the Michigan Association of School Administrators (MASA).

This school year marks the start of Maleyko’s fourth year as superintendent in the 21,000 student district. During his tenure, Dearborn Public Schools had two schools named by the Department of Education as National Blue Ribbon Schools and the District was named a District of Distinction by District Administrator Magazine.

Graduation rates have continued to improve and reached 95 percent in 2017.

“Dr. Glenn Maleyko has proven himself to be an outstanding leader for Dearborn Public Schools and I am honored to present him with the 2019 Michigan Superintendent of the Year Award,” Wigent said.

He described Maleyko as a very caring superintendent with great leadership skills and a strong connection with the community. He said the superintendent’s social media presence demonstrates his willingness to ensure the connection between the district and community.

“Always putting students first, Dr. Maleyko cares deeply about their success, which has paid off in many areas including an increase in rising graduation rates,” Wigent said. “His vision and careful strategic planning are leading to greater success for the students in Dearborn, as well as the educators who nurture their academic development.”

The superintendent’s initiatives include reorganizing administrative responsibilities so schools are grouped by the high school they feed into; this would help educators better see their role in ensuring each student’s ultimate academic success.

One of Maleyko’s favorite accomplishments is the creation of the Superintendent’s Student Advisory Council.  Now in its third year, this group of about 15 high school students meets regularly with the superintendent and other key administrators to share their perspectives on district issues as they discuss how to better meet student needs.

“On a daily basis, Dr. Maleyko demonstrates an authentic interest in the Dearborn community and parents of students he serves,” said Maysam Alie-Bazzi, executive director of staff and student services. “Maleyko believes in academic excellence for all students with an emphasis on social and behavioral development.”

Bazzi led the drive to nominate Maleyko for the award. The application included praise from dozens of representative across the community.

School Board Trustee Mary Petlichkoff described Maleyko as an enthusiastic, forward-thinking superintendent who has boundless energy and drive.

“I know he also is deeply committed to the success of every student in the district and is one of the most accessible superintendents I have ever encountered,” O’Reilly wrote.  “He believes in transparency and is well known for his ‘selfies with the superintendent’, his informal outreach that inspires goodwill across all ages.”

Those in the audience for the presentation included Maleyko’s family, former school board members and Beth Whiston, widow of the late Brian Whiston, who served as Dearborn Schools superintendent before leaving to lead the Michigan Department of Education.  Brian Whiston was named Superintendent of the Year in 2014 while in Dearborn.

“This award really belongs to Brian as well; he was my mentor,” Maleyko told the audience and Mrs. Whiston.

The Michigan Superintendent of the Year is recognized for strong leadership, creativity in successfully meeting the needs of students, communication skills, professionalism, community involvement and student success during that person’s tenure.

“As a lifelong resident of Dearborn, Dearborn Schools graduate and a Dearborn Schools employee, I know how fortunate our district and our community is to have a superintendent as conscientious, reflective and student-focused as Dr. Maleyko,” Alie-Bazzi said.