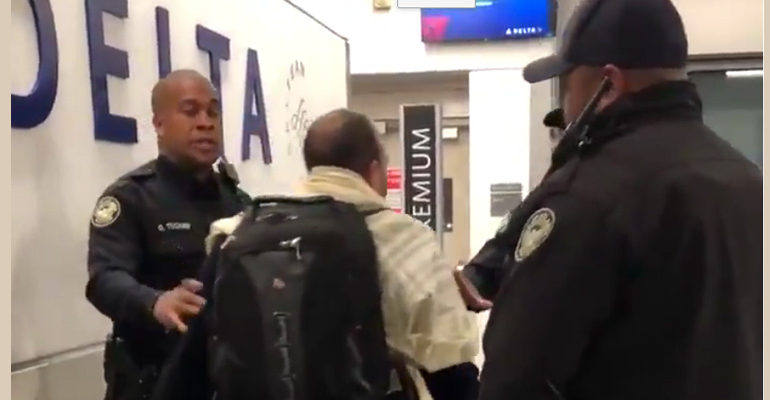 David Toaff, 37, shouted remarks that fellow travelers interpreted as anti-Semitic during a flight from Washington, D.C., to Atlanta on Wednesday

ATLANTA — A Delta Air Lines flight on the eve of Thanksgiving was interrupted by a racist rant 30,000 feet in the air.

Atlanta police said that passenger David Toaff, 37, shouted remarks that fellow travelers interpreted as anti-Semitic during a flight from Washington, D.C., to Atlanta on Wednesday.

“Preliminary information indicates that while in flight … a male was yelling, asking Jewish people on board to identify themselves and making remarks about bombings to passengers aboard the aircraft,” Officer Lisa Bender said.

Authorities were waiting for Toaff at the gate once the plane landed at Hartsfield-Jackson International Airport on Wednesday night.

Authorities said Toaff was uncooperative and refused to calm down, despite officer’s requests. He was ultimately detained after “continuing the disturbance” and resisting arrest.

“The male was taken into custody and charged with obstruction and disorderly conduct,” Bender said.  “He was transported to the Clayton County Jail.”

Another passenger, Jordan Dale, recorded Toaff’s encounter with the Atlanta police after landing. 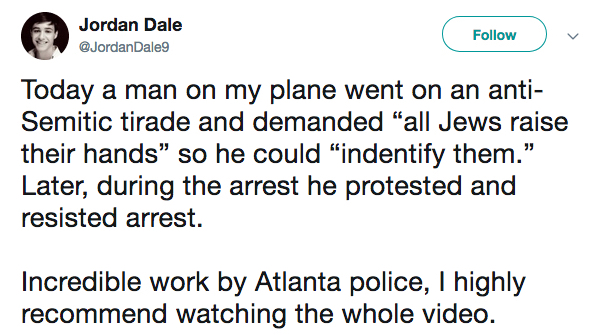 In a video posted to Dale’s Twitter account, Toaff told officers he is “not a bad person” and asked, “What did I do wrong?” He then attempted to run away from several officers.

A person off screen can be heard calling Toaff a “Nazi” during the incident.

“Today a man on my plane went on an anti-Semitic tirade and demanded “all Jews raise their hands” so he could ‘identify them,'” Dale tweeted alongside the video. “Later, during the arrest he protested.”