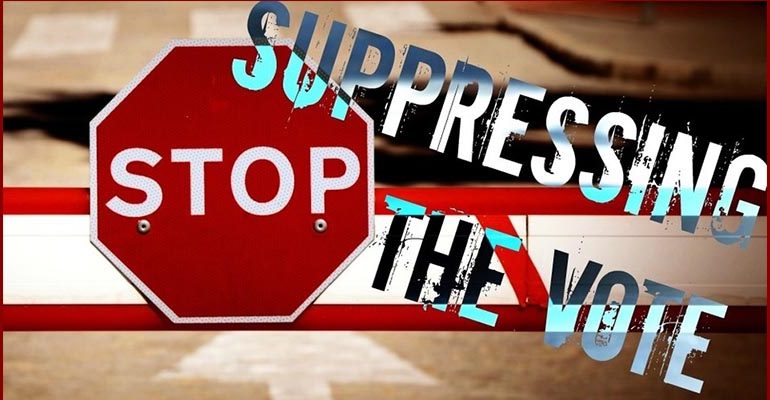 The other day, a friend asked what surprised me most about politics. This may seem strange, but I’d never really thought about the question.

My response was off-the-cuff but heartfelt. The biggest surprise is also among my biggest disappointments with American political life: The ongoing effort by politicians to suppress votes.

Yes it’s gone on for years. And in some respects, limiting the vote has been a feature of American politics since the beginning, when only White men with property could cast ballots. But when I began in politics, I assumed those days were past us and everyone was on board with the idea that the more people who vote, the better. Boy, was I naïve.

The truth is, people work hard to prevent other people from voting. To be sure, some voters do it to themselves — they’re too busy, or they think their vote doesn’t matter or they encounter long lines and turn away.

But there is also an active, ongoing effort to keep people — often minority or poor voters — from casting their ballots. How do politicians accomplish this? Here’s a short, and incomplete, list:

— They require voter IDs — and then limit which IDs are valid (a gun permit is fine, for instance, but not a student ID);

— They close polling places — usually (you guessed it) in poor and minority communities;

— They limit the hours polls are open;

— They conduct sweeping purges of voter rolls, often stripping voters of their ability to vote without their knowledge;

— They restrict eligibility for absentee ballots;

— They refuse to invest in the infrastructure that sustains voting, resulting in machines that break down and long lines that discourage potential voters.

The people who oppose making it easier to vote often cite as their reason that they’re trying to prevent voter fraud. In other words, they’re defending the integrity of our democracy and of the ballot.

Let’s be blunt: There’s no tidal wave of illegal voting in the U.S.

But here’s the thing: There is occasional voter fraud, and yes, it needs to be guarded against, but rampant voter fraud simply doesn’t exist in this country. Efforts to prove that it exists have failed. Let’s be blunt: There’s no tidal wave of illegal voting in the U.S.

What does inarguably exist, though, is an epidemic of efforts to suppress the vote. Voting is a basic right of citizenship. It’s the foundation of a democracy — people’s ability to participate and engage with the issues facing their communities and their country. That ideal lies at the core of American values and I’m always mindful of the fact that a lot of Americans gave their lives for that ideal. Moreover, excluding groups of voters encourages resentment, risking protests and potentially violence.

I’ve always believed that you win power by convincing people that your ideas and proposals are right — or at least that you should be given the chance to prove that they’re right. Winning power by keeping people away from the polls is a perversion of what democracy is about. Our political institutions need to reflect the will of the people, and if you disenfranchise people, it means that our representative government doesn’t reflect accurately the will of the people.

Because voting laws are in the hands of the states, there are plenty of counter-examples — states that have worked to make voting easier, to expand hours, to allow same-day registration and the like. There’s more to be done, especially making sure that the politicians who control elections aren’t themselves running for office, as happened notably in November’s elections in Georgia and Kansas. That is a conflict of interest of the most obvious sort.

This struggle, between expanding the vote and trying to limit it, is ongoing. It’s not going to be resolved any time soon. I’m always distressed when I encounter efforts to suppress the vote. But I take heart from the fact that over the course of American history, the dominant trend has been to expand citizens’ access to the polls; and I hope that over the long term, we continue in that direction.