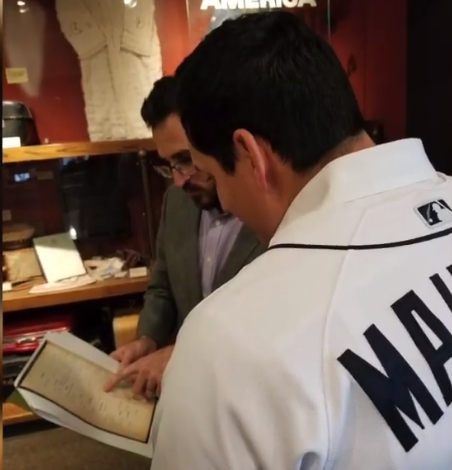 Current outfielder Mikie Mahtook broke the trend after arriving in 2017, however. He has played in nearly 200 games over the past two seasons and becoming a fan favorite.

While touring this winter as part of the Tigers’ annual Winter Caravan, Mahtook got a chance to visit the Arab American National Museum, where he received a surprise as part of what WXYZ-7 sportscaster Brad Galli called “one of the most unique trips I’ve ever seen a player take.”

Museum staff surprised Mahtook with a gift straight out of left field — a copy of the paperwork showing his family’s immigration story from Syria and Lebanon to Lafayette, Louisiana.

Mahtook left some gifts of his own as well, including a signed bat, a hat, cleats and a jersey that are still on display for museum patrons, along with a promise to return when the season starts this summer.

The Tigers’ home opener is April 4 vs. Kansas City.

Last year, the Tigers also announced the creation of the only Arab American night in Major League Baseball, which will took place on September 22, 2018 against Kansas City. This year, according to the Arab American National Museum, Arab American Night will take place on Tuesday, Aug. 6.