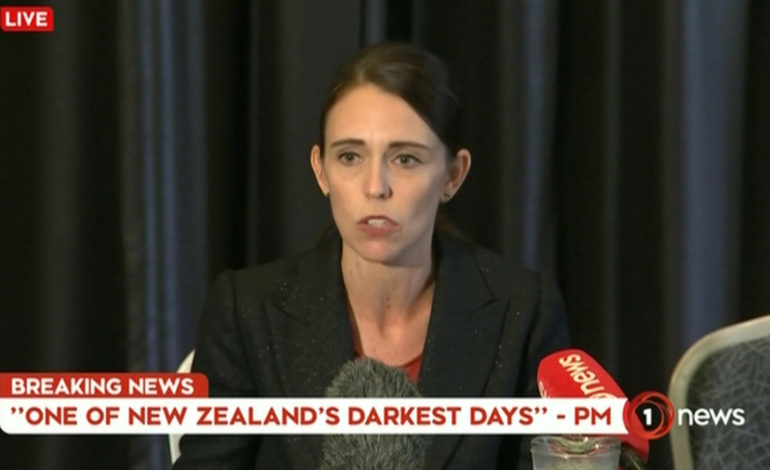 WELLINGTON, New Zealand — A gunman opened fire on Friday prayers at two mosques, killing many worshippers and forcing the city of Christchurch into lockdown, in what looked set to be the country’s worst ever mass shooting.

Prime Minister Jacinda Ardern said 40 people have lost their lives and more than 20 people were seriously injured in the shootings.

Addressing a media conference, Ardern said 10 were killed in the first mosque, while 30 were shot dead in the second mosque.

She also confirmed that four people, including a woman, have been detained in connection with the massacre. “They were not on security watch lists,” she said of the people in custody.

Ardern said the national security threat level increased from low to high after the incident.

Video footage widely circulated on social media, apparently taken by a gunman and posted online live as the attack unfolded, showed him driving to one mosque, entering it and shooting randomly at people inside.

Worshippers, possibly dead or wounded, lay huddled on the floor of the mosque, the video showed. Reuters was unable to confirm the authenticity of the footage.

One man who said he was at the Al Noor mosque told media the gunman was White, blond and wearing a helmet and a bulletproof vest. The man burst into the mosque as worshippers were kneeling for prayers.

“He had a big gun … he came and started shooting everyone in the mosque, everywhere,” said the man, Ahmad Al-Mahmoud. He said he and others escaped by breaking through a glass door.

At least one of the suspects is an Australian citizen.

Australian Prime Minister Scott Morrison said the shooting was carried out by “an extremist, right-wing, violent terrorist” who was an Australian-born citizen. The investigation is being led by New Zealand authorities.

Radio New Zealand quoted a witness inside the mosque saying he heard shots fired and at least four people were lying on the ground and, “there was blood everywhere.”

Ardern condemned what she called “an extraordinary and unprecedented act of violence.”

“This is one of New Zealand’s darkest days,” she said.

New Zealand’s Police Commissioner Mike Bush said four people — three men and a woman — had been taken into custody, but it was not clear if the gunman was among them or if other people were involved.

Bush also said it should not be assumed the attack was isolated to Christchurch.

“At this point in time we should never make assumptions,” he said.

The online video footage, which appeared to have been captured on a camera strapped to the gunman’s head, showed red petrol canisters in the back of his car, along with weapons.

All mosques in New Zealand had been asked to shut their doors, police said.

Muslims account for just over 1 percent of New Zealand’s population, a 2013 census showed.

“Many of those who would have been affected by this shooting may be migrants to New Zealand,” Ardern said. “They may even be refugees here. They have chosen to make New Zealand their home and it is their home … they are us. The persons who has perpetuated this violence against us … have no place in New Zealand.”

The online footage showed the gunman driving as music played in his vehicle. After parking, he took two guns and walked a short distance to the entrance of the mosque.

He then opened fire. Over the course of five minutes, he repeatedly shoots worshippers, leaving well over a dozen bodies in one room alone. He returned to the car during that period to change guns and went back to the mosque to shoot anyone showing signs of life.

The video shows the gunman driving off at high speed and later firing at parked cars and a building. Police said the second mosque attacked was in the suburb of Linwood, but gave no details.