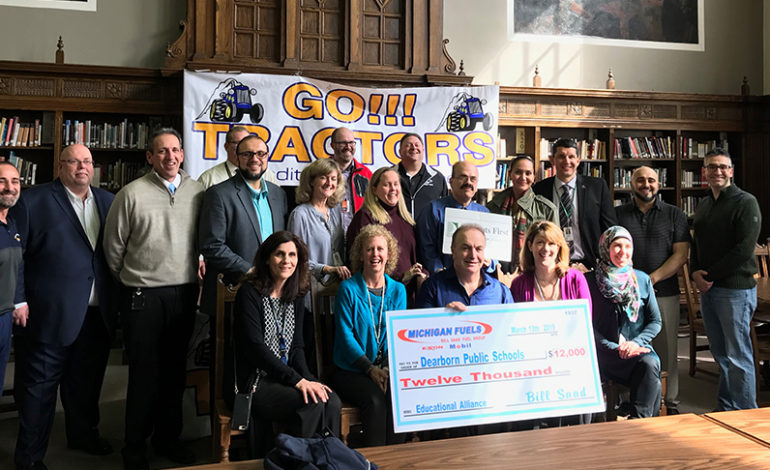 Checks were donated by Michigan Fuels and Exxon Mobil. Michigan Fuels is a branded wholesaler of fuel, directly selling to gas stations. The Fordson football team and each of the buildings in the district received $1,000 checks. 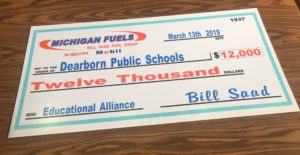 Michigan Fuels donated $12,000 to the Dearborn Public Schools -Photo by The AANews

Bill Saad, CEO of Michigan Fuels, Inc and Fuels Transportation Inc, is a 1981 graduate of Fordson High School. He attended McDonald Elementary School, Lowrey Middle School and Fordson during his path to graduation.

Saad told The AANews that he has been supporting schools in Southeast Michigan for almost 20 years and the Fordson football team for 30 years.

Doing business near those communities initiated the idea of giving back.

“It’s giving back for education,” Saad said. “There are two separate checks going to Fordson, one for STEM activities and one for athletics.”

Saad emphasized the importance of giving back to the community, as school budgets are often cut and supplies are not always adequate.

“Our schools were always short on supplies, and the school dictionaries were ripped,” he said. “I always said I will go back and help the schools when I become successful.”

Moreover, Saad expressed maintaining the connection with more than 90 schools in Southeast Michigan. He added that it’s also crucial to support the schools within those communities because they support the gas station businesses locally.

Knowing the funds will be put to good use, Saad encouraged other businesses in the area to give back.

“Hopefully more local stations will see the benefit of giving back to the community,” he said.