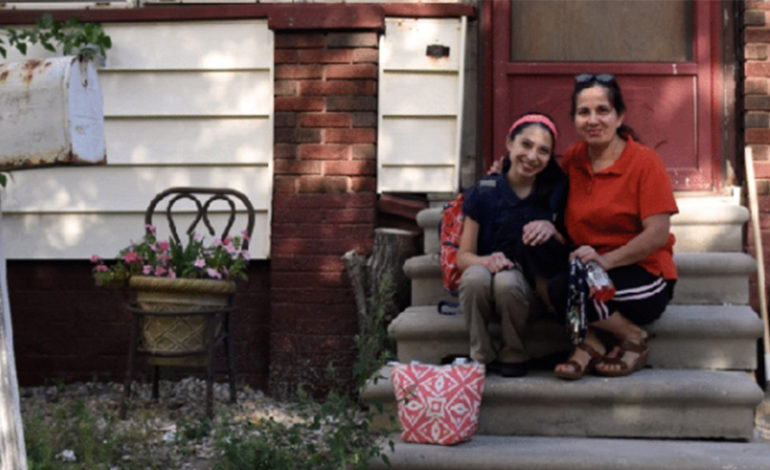 Immigrants in Detroit are just as eager as non-immigrants to own homes, but often lack awareness of necessary steps, according to a study by Global Detroit. Pictured above are immigrants Myra and her daughter, Rebecca in front of their home. // Photograph Courtesy of Global Detroit

The study, “Immigrant Housing in Detroit”, focuses on barriers that may lower homeownership rates among immigrant Detroiters, including significantly less awareness of credit scores and lower usage of bank accounts.

According to research, immigrant Detroiters are just as eager to become homeowners as non-immigrant residents.

Global Detroit called for increased investment and outreach to connect immigrant Detroiters with financial literacy training and resources in hopes of expanding homeownership.

“We are working every day to build a Detroit that welcomes everyone and gives longstanding Detroiters, immigrants and newcomers the opportunities to build the American Dream right here in our city,” said Mayor Mike Duggan. “Global Detroit’s research highlights how investing in residents can help us rebuild our neighborhoods one family and one house at a time.”

The new homeownership study follows research conducted in 2016 on the home-buying potential of immigrant families in 23 Rust Belt cities.

That study, conducted with the Fiscal Policy Institute and released by the Welcoming Economies Global Network, documented how immigrants were the only growing source of population in most Rust Belt cities.

While, individually, immigrants have lower incomes than non-immigrant Detroiters, their households tend to have more wage-earners per household. This gives immigrant families slightly higher household incomes and resources for homeownership.

”The only significant growing source of population in Detroit and Southeast Michigan, like most places in the Midwest and many across America, is through immigration,” said Steve Tobocman, executive director of Global Detroit and one of the study’s principal authors. “Our research indicates that building more inclusive financial literacy, budgeting, banking and homeownership programs will pay tremendous dividends for increasing homeownership in Detroit.”