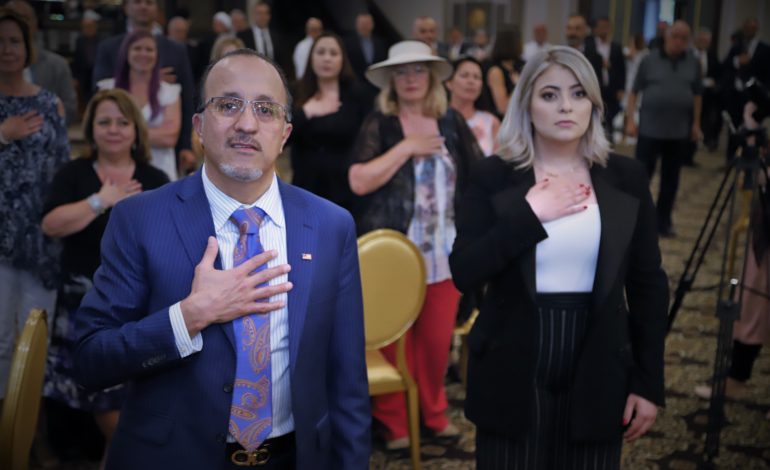 Councilman Dave Abdallah pays respect to the national anthem beside his daughter during the fundraising event at the Bellagio Banquet Center in Dearborn Heights, Wednesday, June 12 - Photos by Abbas Shehab

Siblani spoke about the need for unity in city politics and the pride he felt in Arab American accomplishments in public office.

“I’m truly honored to belong to the kind of community that produces people like Dave Abdallah,” he said. “This is a great community. A community that is serving our cities, our counties, our state and our country.”

“I know most of you are here to support Dave, but I have to brag about him a little,” he added. “Because we live at a time when the standards for governance have declined drastically, from the president on down. At such a troubling time we need good people to step in and make things right. That is why it is important to elect Dave Abdallah back to City Council in Dearborn Heights.”

Siblani also urged city officials to work together to advance causes for the good of the community rather than bicker over differences.

Bob Curran and Adam Oberski from Century 21 in Dearborn introduced Abdallah and attested to his work ethic and devotion to his work in both real estate and local politics.

“I know that Dave spends hours researching and learning before every City Council meeting,” Curran said. “This is a man that gives 110 percent to every task he takes on. Dearborn Heights is lucky to have someone like him serving on their City Council.”

Abdallah said he was honored and overwhelmed by the outpouring of support for his reelection campaign.

“I am honored by your presence and support today,” he told a packed room. “I love this country. I came here as a young child in 1976 and instantly fell in love with it. I am passionate about serving this country and this city, which includes the north end and south end of Dearborn Heights and every single resident.”

He assured the audience that he does not believe in using one’s Council seat for future political gain.

“I am not doing this to build my resume and for my own self-interest,” he said. “I’m doing this because I love giving back to those who choose me to serve. This is true for my real estate and political career.”

Abdallah also said he is excited about being a conduit between the city government and residents in his capacity as councilman.

He highlighted accomplishments during his time on the City Council, such as helping bring a new gym to the south side fire department and helping the city obtain a golf course property from the county.

“Every vote counts,” he said. “I need your help getting to the finish line and continue to be a public servant.”

Nine candidates are vying for three seats on the Dearborn Heights City Council. The primary election will be held on August 6 and the general election on November 5.