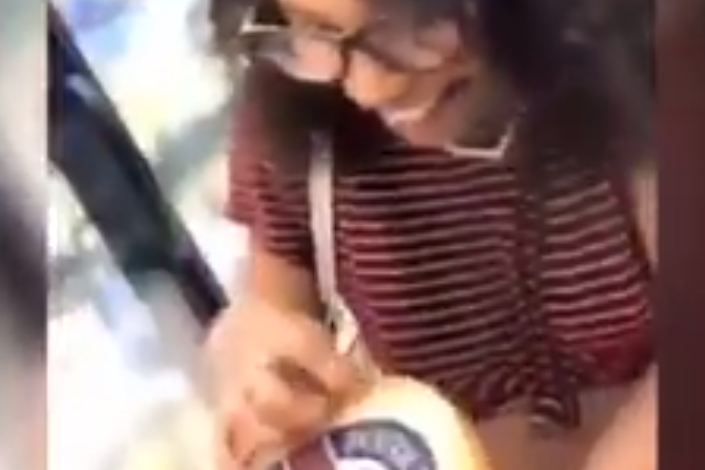 LUFKIN, TX — A Walmart customer who licked a tub of ice cream before putting it back in a supermarket freezer could face up to 20 years in prison, police said.

The woman, whose name has not been confirmed yet, was seen outside of a Walmart store around 11 p.m. on June 28. An arrest warrant was issued on a charge of second-degree felony tampering with a consumer product, which carries a sentence between two and 20 years in prison along with a potential fine of up to $10,000 according to the Texas penal code.

A video of the woman, who has been called ‘the Lufkin licker”, has gone viral on Twitter and been viewed more than 11 million times since it was posted late last month.

Another man who was thought to have filmed the video is also being sought by police. The brand was Blue Bell.

A woman claiming to be the suspect on social media said she had the flu when she licked the ice cream tub, and dared others to post videos doing the same on social media.

“Our biggest concern is consumer safety – in that regard we are glad to see the tainted product off the shelves”, said Gerald Williamson of the Lufkin Walmart’s security department.

“We’re appalled that someone would do this”, he added. “We take it incredibly seriously and we’re acting on it as the major crime that it is.”

“The safety of our ice cream is our highest priority, and we work hard to maintain the highest level of confidence of our customers,” they wrote in a statement.

Their half-gallon products have a natural seal created during the freezing process, the company added, and any signs of tampering should be noticeable.

“Food tampering is not a joke, and we will not tolerate tampering with our products. We are grateful to the customers who alerted us and provided us with information.”