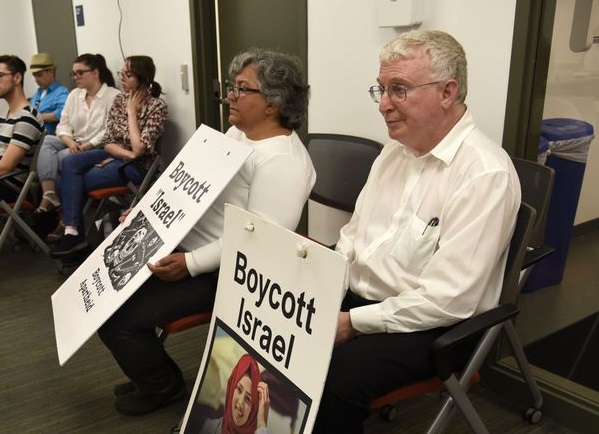 Savabieasfahani and Coleman. Photo via Mlive.com.

ANN ARBOR, MI — A majority of Ann Arbor City Council members have agreed to discuss a possible boycott resolution of U.S. military support for Israel, a change-of-heart nearly two decades in the making.

The possible resolution will be discussed on August 14, an article from Mlive.com said, despite objections from Ann Arbor Human Rights Commission Chairwoman Leslie Stambaugh.

Boycott Israel demonstrators Blaine Coleman and Mozhgan Savabieasfahani have been speaking to the council for 17 years, including at Wednesday night’s meeting.

“We have been demanding boycott against the apartheid state of Israel in this room for 17 bloody years, while Israel shoots its way across the Arab world,” Coleman said on July 1 to the council.

The two demonstrators have consistently called on the council to examine the issue, refusing to back down over Israel’s human rights abuses in the Middle East.

“Seventeen bloody years, this city council has fought to block even the slightest symbolic resolution against Israel,” Coleman said.

Savabieasfahani also called Israel “a terrorist state funded fully by the United States of America, bombing its way wherever it pleases,” Mlive reported.

“If I cannot appeal to your sense of humanity, that it’s treacherous to live the life of a Palestinian in the West Bank and Gaza, I’m appealing to your sense of money,” she said. “You’re paying for this slaughter.”

Jeff Hayner, a council member and Democrat from the 1st Ward, called the situation in Palestine a “human rights tragedy” and seemed to indicate his support for a resolution.

“And I don’t generally believe that silence is complicity, but in this case it might be.”

“I believe an injustice anywhere is an injustice here as well,” said Ramlawi, D-5th Ward and a council liaison to the HRC.

Ramlawi, who owns the Jerusalem Garden restaurant downtown, said his father fled the West Bank as a refugee in 1948.