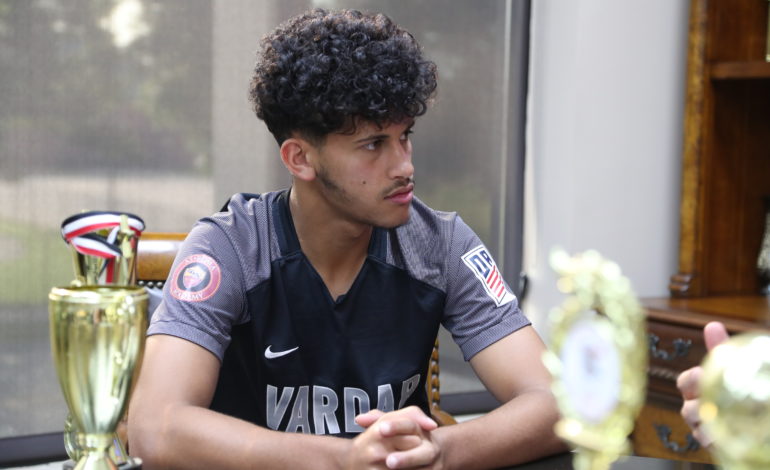 Hammam Nasser in an interview with The Arab American News

DEARBORN — Edsel Ford High School senior Hammam Nasser is on his way to play soccer for the NCAA Division I Butler University in Indianapolis.

Nasser, 17, who earned a scholarship to Butler, is the son of Mohamed Nasser, founder of the Michigan Yemen Sports Association (MYSA), who also organized many tournaments and programs for the youth since 2003.

“I felt like the kids needed someone to organize sport events for them in Dearborn,” the elder Nasser said. “And the organization obtained its license in 2006 in Michigan.

“I am grateful that I was able to bring a change to the children of the community and I was surprised by my son’s talent,” he added.

Hammam Nasser will be playing soccer with the Butler Bulldogs’ men soccer team. He has been playing for the Flint City Bucks, formerly known as the Michigan Bucks, a member of the USL League Two division of the United Soccer League, which won Premier Development League championships in 2006, 2014 and 2016.

He started playing with the MYSA at 5-years-old.

“Soccer is a way of life, a disciplined game of training and always looking ahead,” he said.

According to Mohamed Nasser, soccer is a way to keep the kids in the community safe and disciplined, which spills over to their everyday life.

“This makes the students concerned about not just playing, but with keeping their scholastic grades intact as well,” he said.

Lebanese player Soony Saad, who now plays for the Al Ansar Football Club in Lebanon, trained under the elder Nasser.

“Saad is like a son to me,” Nasser said. “He is a good player and his presence in the tournaments had a positive effect on the kids in the organization, including my son.”

Saad even attended the interview when the university representatives interviewed Hammam Nasser, in order to offer his recommendation, which added credibility as a known international soccer player.

The Edsel Ford senior has achieved a few awards during his soccer career.

“My dream is to become the next Mohammed Salah; I look up to him,” he said.

Mohammed Salah is an international Egyptian soccer star player who plays for Liverpool in England.

As for Mohamad Nasser, he sees soccer as important to area communities.

“I am grateful that various communities [Lebanese, Yemeni, Iraqi] have come together to play soccer,” he said. “Soccer is the only successful way of ensuring the future of our kids and protecting them from falling into harmful paths. It is also a good way to ensure they stay healthy and in good shape.

“When you offer our kids the necessary tools, they will be able to achieve great things,” he added.