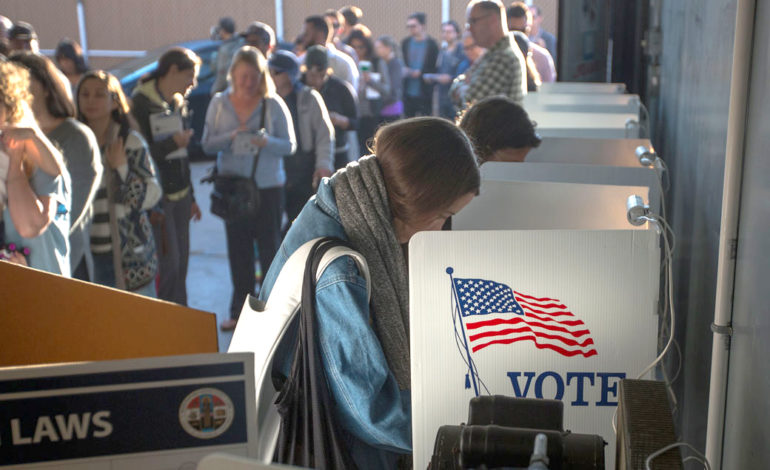 Russian meddling isn’t our only election problem. We’ve got an archaic registration process, restrictive voting practices, voting systems bedeviled by outdated technology and inadequate budgets for the voting infrastructure, among other issues

A few years ago, I was at a polling place here in Indiana where a long line of people stood waiting to vote. A woman recognized me and called me over. “Why is it,” she asked, “that you politicians make it so hard and inconvenient to vote?”

I thought of this the other day when I read the news reports about presidents Trump and Putin meeting and jestingly accusing one another of election meddling. The background, of course, is the pressing issue of Russian interference in U.S. elections. American voters take elections seriously enough to stand in line — for hours, sometimes — to cast a ballot. And here were the two presidents making light of attempts to subvert the voices of ordinary people. I’d expect nothing less from Putin, but from an American president?

The sad truth is, Russian meddling isn’t our only election problem. We’ve got an archaic registration process, restrictive voting practices, voting systems bedeviled by outdated technology, inadequate budgets for the voting infrastructure and an entire nation’s worth of overloaded local elections staff. There are robust efforts afoot, by many people and groups, to suppress — not encourage — votes; much effort in this country goes into keeping some groups of people from having a say in the conduct of their government.

The ballot is the foundation of our democracy. It’s our best way to gauge the public’s will. If we fail to get the ballot box right, then our democracy fails.

It’s also distressingly common to find officials who are uninterested in promoting a fair and convenient vote, but instead are looking for ways to manipulate the system so that their preferences emerge from the voting. Too few of them believe in Abraham Lincoln’s formulation at Gettysburg: “Government of the people, by the people, for the people.” They define “people” so as to exclude voters they don’t like.

So let’s remember: The ballot is the foundation of our democracy. It’s our best way to gauge the public’s will. If we fail to get the ballot box right, then our democracy fails.

Elections are not the sum total of “democracy.” An independent judiciary, an informed public, institutions such as schools, labor unions, business groups and the news media… all are necessary as well. Democracy is a hugely complex phenomenon. But at its heart is one thing: The vote.

We’ve come a long way on this front. The Founders thought that rule by the people was tantamount to anarchy. So they restricted the vote early on to White males who owned property. In a sense, our history as a nation has been written in terms of extending the franchise to more and more people.

But that’s not the only requirement. Over time, I’ve come to look at a good election not so much in terms of who wins or loses — liberal or conservative, Republican or Democrat — but in terms of the process, and whether it was fair and democratic. Sure, I’m disappointed sometimes in the results of voters’ decisions at the ballot box. But I’m always reminded that our system is designed with the capacity to correct errors. In a lot of ways, we’ll be strongest as a country not by means of a strong military or a strong economy, but when our battle cry is, “Let the people vote!”

If you look across the state and local landscape, you’ll find efforts to make voting more accessible and more verifiable that offer hope in the midst of voter suppression and election meddling. But these need to be a national aspiration that’s pursued at every level: To protect voting infrastructure, provide a paper trail for every vote, ensure adequate resources for the conduct of elections and vow to ensure that state and local elections systems are run fairly, on behalf of everyone who’s entitled to vote. Our governments have to work constantly at what that woman in line wanted to see: Making voting accessible and convenient. Yes, we need to protect the integrity of the vote. But we also need to make it a positive civic experience, not a burden.

Elections have consequences. The winners get political power that enables them to change the course of history. Our chief way to have a say in this is to vote in every election, every time, for every office. Let’s make sure we can, and that when we do, our vote matters.