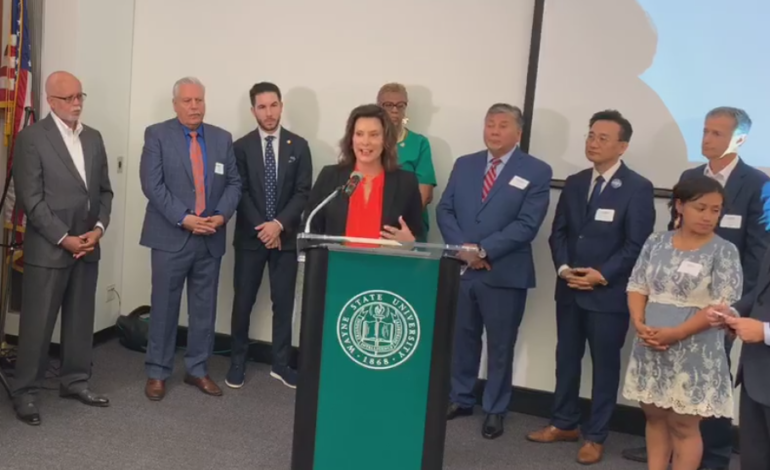 DETROIT — Gov. Whitmer, Wayne County Executive Warren Evans, Detroit Mayor Mike Duggan and publishers of the region’s biggest ethnic newspapers gathered at Wayne State University’s McGregor Conference Center on Wednesday, July 24 for the 2019 Minority Media Summit, where they discussed the key challenges in getting people to stand up and be counted for the crucial 2020 U.S. Census.

Billions of dollars and multiple congressional seats will be at stake, but plenty of barriers exist to securing an accurate count.

“Everything from education to yes, the roads, is impacted by the dollars we draw into the state of Michigan,” Whitmer said in reference to the Census count, which will determine the federal funds Michigan receives in the next decade.

Minorities are often undercounted during each Census due to a lack of trust, multiple panelists said, including Duggan, causing a loss of federal funding.

“I spent the summer knocking on doors of racially mixed neighborhoods and I can tell you from first hand experience, the minority undercount is real,” Duggan said. “It just is true. When the government knocks on doors of families of color and says how many children do you have, how much money do you make, et cetera, there is more distrust of government than tends to be in the Caucasian households. It’s been proven scientifically that it’s true.”

Evans said that public trust in these communities can be regained through the ethnic media and other community members getting the word out, because of the increased trust factor. The official count will begin in March.

“Trust in the ethnic communities will come much stronger from ethnic media than it will from anywhere else,”  he said. “And all of the ethnicities that make up Wayne County are what makes Wayne County great.”

Wednesday’s landmark event was moderated by Dr. Hayg Oshagan, professor of communications at Wayne State University and the executive director of New Michigan Media, a network of ethnic and minority media outlets within the state.

Everything from education to yes, the roads, is impacted by the dollars we draw into the state of Michigan. They depend on the Census count, which will determine the federal funds Michigan receives in the next decade. -Gretchen Whitmer, governor, state of Michigan

“We’ve never been able to bring together this number of ethnic media from across southeastern Michigan,” Oshagan said. “We have over 70 people from over 40 media outlets.”

Oshagan emphasized the importance of Census turnout, especially among Michigan’s minority communities. He noted how important it was for minority and ethnic media to work together to have a louder voice. He thanked the Michigan Nonprofit Association for partnering with NMM to make this event possible and successful.

He also said that 26 percent of Michigan is non-White, along with 86 percent of Detroit residents.

About 42 percent of the state’s budget will be based on the Census count, he said.

Many members of ethnic communities are fearful of how Census information could potentially be used against them by the Trump administration due to its anti-minority, anti-immigrant and anti-Muslim rhetoric, however.

According to Oshagan, there is a law on the books stating that Census information may not be used for 70 years following its collection. The law, passed in 1950, came on the heels of the 1942 internment of Japanese Americans, which was conducted using information from the 1940 U.S. Census.

In response to audience questions on the matter, Oshagan said that while anything is possible, the rules against using Census information against any U.S. residents are clear-cut and strong.

Donna Murray-Brown, the president and CEO of the Michigan Nonprofit Association, urged all minority community members to fill out their Census forms in 2020 regardless of their situation.

“Civic engagement is now more important than ever,” she said, referencing the slogan “10 Minutes, 10 Years” to describe the impact that can be made by filling out forms.

“We need to look at the big picture and operate in strength, not in weakness,” she added, while also mentioning next year’s redistricting as a key motivator.

Kim Trent, the chairwoman of the Wayne State University Board of Governors, said that the 2020 Census is especially important because it’s happening during an election year.

“Minority communities are traditionally undercounted,” she said, adding that ethnic newspapers and community members are important for getting the word out.

“We cannot afford to leave millions of federal dollars on the table because of an inaccurate Census count.”

The publishers and other media representatives from more than 40 ethnic and minority media outlets in southeast Michigan discussed how best to reach their individual communities and how to combat the growing fear of repercussion felt in minority communities since the beginning of the Trump administration. The event included representation from the Yemeni, Filipino, African American, Latino, Arab American, Jewish, Native American, Chinese, Bangladeshi, Japanese, Polish, Korean, Indian, Armenian, Vietnamese and Albanian communities.

According to Oshagan, “fear of repercussion” is the number one reason researchers have recorded as to why members of the African American, Asian American, Latino American and Arab American communities are hesitant to fill out Census forms.

Gutierrez and Siblani both said restoring trust is a major challenge.

Siblani said the lack of trust runs deep. Many Arab American immigrants are naturally hesitant to trust government leaders because of dictatorial regimes in their original homelands.

Leaders in the U.S. are generally more trustworthy, but Trump’s rhetoric has eroded that trust with the 2020 Census looming.

“People in this country believe in their government, relatively speaking, compared to other countries,” Siblani said. “However in recent years, this trust has been shaken, sometimes destroyed.

“But we need to be stronger and more persistent,” he added. “But we aren’t alone. Many Americans are with us and we should defeat the fear and stand up and be counted.

“Why are they doing this?” he asked, rhetorically. “To try and scare us away. If we get scared and run away they will win. We want to win, therefore we should stand up and be counted.”

Michigan stands to lose at least one congressional seat and a reduction in the number of electoral college votes if its population is not properly counted in 2020. It could also lose $1,800 per person per year of federal funding to support programs that use Census data.

After the 2010 Census, the state lost one seat, bringing the total U.S. Congressional delegation in the U.S. House of Representatives in Washington, D.C. to 14.

Census data is used by officials to distribute about $30 billion per year in funds to Michigan for hundreds of programs, including Medicare, Medicaid, education, infrastructure, school lunch programs, Headstart, student loans, housing and more.