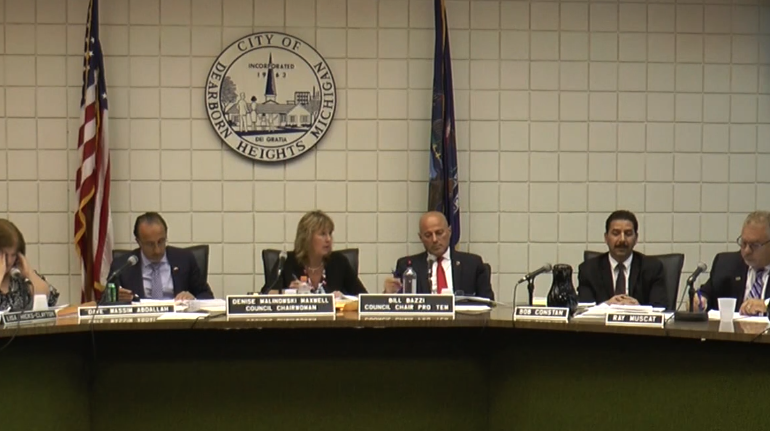 DEARBORN HEIGHTS – In an extraordinary step, the Dearborn Heights City Council moved this week to amend its schedule and add a third regular meeting for next Tuesday, July 30.

The move came as the Council deliberated its next resolution to authorize the retention of Ottenwess, Taweel & Schenk, PLC (OTS).

The resolution also seeks to authorize the firm to file necessary actions if Mayor Paletko does not sign the firm’s retainer agreement.

The Council has 21 days to appeal last week’s Wayne County Circuit Court decision to clear Mayor Paletko of any legal duty to sign the retainer agreement. In order to vote on Paletko’s probable veto of this new resolution, the Council had to scramble to resolve the issue in another open regular meeting before the deadline.

The Council’s next scheduled meeting was to be on August 6.

Second, the retainer agreement states that the law firm is not limited to performing legal services relating to the resolution to perform a financial review of the city’s funds. It therefore infers a contract for unspecified purposes.

Third, the agreement does not specify how long the firm would perform the financial review.

This week, Council members and Corporation Counsel Gary Miotke argued that the new resolution was not consistent with the city charter and that the new retainer agreement and its fee structure itself had to be reevaluated.

The new resolution at least tries to rectify the first compliance issue brought up by the court and seeks to hire OTS as “special legal counsel of counsel to the corporation counsel.”

However, there was no mention of the other two inconsistencies during the City Council meeting this week.

Moreover, the city began accruing a bill with OTS when the original financial review resolution was passed in March. Councilman Dave Abdallah argued that the city filed its first lawsuit without consulting the Council and therefore should not be included in the new retainer agreement. Malinowski-Maxwell agreed to strike it from the resolution.

A source in city government has said that Council will most likely go forward with the resolution without this agreed-upon change.

Malinowski-Maxwell said OTS has not been paid for its services thus far and has not given the city a bill.

In an interview with The Arab American News before the July 23 meeting, Bazzi said any attorney charges would be put up to a vote and will be paid out similarly to how the city pays any other attorney fee.

He also affirmed that the city needed an outside law firm to conduct the financial review and said that one of the partners in the firm specializes in financial audits.

Reached by phone Tuesday, Paletko called Council’s resolution irresponsible and detrimental to taxpayers. He also pointed to Plante Moran, Dearborn Height’s current auditor, and the work it conducted in Troy, which led to the indictment of City Manager Brian Kischnick. That investigation cost Troy around $70,000.

Dearborn Heights will pay the accounting firm $107,310 next year for its routine audit of the city. There is no indication how much the firm would charge if hired to do a forensic audit.

However, it is also unclear how much OTS would charge for its investigation.

THE STORY SO FAR:

By now, the whirlwind of resolutions and litigation that has plagued the city’s government has become increasingly complicated and hard to follow. Here is a brief summary of events, leading up to the last lawsuit brought in front of the Wayne County Circuit Court:

On March 26, the City Council passed a resolution to do a financial review, dubbed a “forensic audit”, of city expenditures, retiree health care spending, spending on city owned-vehicles, charges from the city’s water fund and other financial activities.

That same day, the Council also passed a resolution by a 4-2 vote to approve the hiring of OTS. Paletko vetoed this resolution on April 2 and wrote a letter to City Council indicating that he would not sign an agreement.

The Council overrode the veto on April 9 by a 5-2 vote. At the same time, also by a 5-2 vote, it passed a resolution to approve the retainer agreement between OTS and the City Council and authorize Paletko to sign it on behalf of the city.

The mayor subsequently vetoed the resolution to approve the retainer agreement. At the following regular meeting on April 23, the City Council did not have quorum.

On April 12, the Council filed its first lawsuit against Paletko in Wayne County Circuit Court, asking the court to order Paletko to sign the retainer agreement. The court rejected the Council’s motion since it had not passed a resolution to go forward with the lawsuit. Abdallah protested that he was not made aware of this action before the city filed in court.

Finally, in a special meeting on May 9, the Council adopted a resolution to file another lawsuit against Paletko in the event the mayor did not sign the retainer agreement before May 15.

Paletko did not sign the agreement and subsequently won the case in court last weekend.