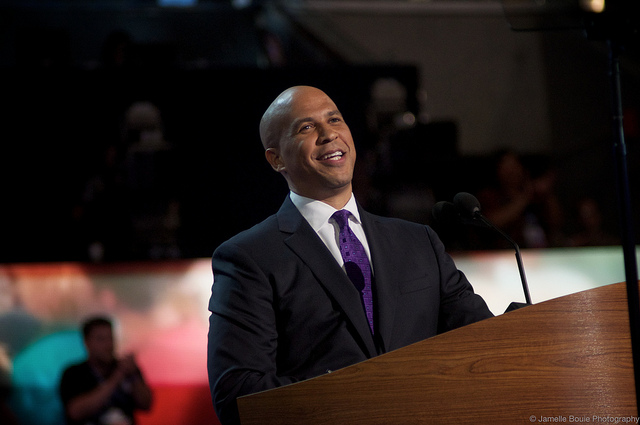 WASHINGTON, D.C. — In response to a recent question inquiring whether Israeli Prime Minister Benjamin Netanyahu is racist, New Jersey Senator and presidential candidate Cory Booker said he entered the Senate to stand up for the state of Israel.

Booker was asked about Netanyahu at the Iowa State Fair on August 10 by Jewish Insider’s Ben Jacobs. Booker did not answer the question directly and seemingly objected to its premise. His response mainly focused on how he believes the Trump administration has endangered Israel.

“You know, what I think very strongly, sir, is that we have a crisis with Israel right now,” Booker said.

“Israel is less safe under this president than it was before,” he added. “We literally have a president right now that has allowed Iran to have a superhighway through Syria; that literally announces by tweet that he’ s pulling our troops out, which puts Israel more at risk.

“We have a president who is breaking [the] tradition of Democratic and Republican presidents in the past by turning his back on the commitment to a two-state solution, and is not doing what he should be doing to protect that region; he is pulling away from a nuclear deal now as he’s making Iran go perilously towards it.”

Booker also said, “I know you have these interesting questions, but I got to the United States Senate to stand up for our allies and for the State of Israel; and this is a president who is making the United States weaker and making Israel more vulnerable.”

Unlike Booker, a number of Democratic candidates have denounced Israel’s government as racist in recent months.

During an April event in Iowa former Texas U.S. Rep. Beto O’Rourke said that the U.S./Israel partnership, “must be able to transcend a prime minister who is racist, as he warns about Arabs coming to the polls, who wants to defy any prospect for peace as he threatens to annex the West Bank and who has sided with a far-right, racist party in order to maintain his hold on power.”

“The goal must be to try to bring people together and not just support one country, which is now run by a right-wing, dare I say, racist government,” Sen. Bernie Sanders (I-VT) told a CNN crowd.

That same month Sen. Elizabeth Warren (D-MA) was also asked whether she believed Netanyahu is racist.

“He’s embraced right wing extremist groups in Israel and embraced racist language,” she said. “Judge him by what he does.”