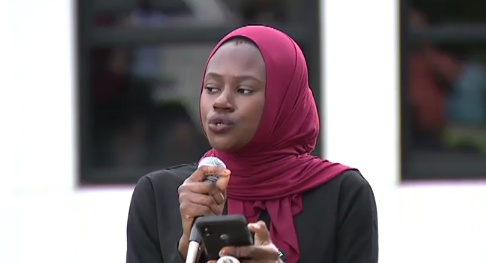 DEARBORN — More than 150 demonstrators gathered outside the Dearborn Police station on Michigan Avenue on Tuesday, demanding an end to the department’s cooperation with Immigration and Customs Enforcement (ICE) for detaining area residents.

According to police records obtained by The Detroit News, the Dearborn Police Department detained nearly 1,000 immigrants last year on behalf of ICE.

The rally was part of the national “Close the Camps” campaign, and included speeches from the three representatives.

The full scope of the cooperation agreement between the two agencies is unknown, a report from the website Deadline Detroit said, and it is unclear where detained immigrants are being held.

The ACLU of Michigan and Michigan Immigrant Rights Center sent letters Friday to nine county sheriffs, prosecutors and two police chiefs, including Haddad, urging that they stop detaining people in jails at the request of ICE.

“They have denied having a contract and holding people in their jail, and from our partnership with MIRC, they’ve documented intakes with people being held in Dearborn or transported through,” said Abril Valdes, immigrant rights attorney for the ACLU of Michigan. “They are being used as a hub for homeland security…this corrodes community trust, especially if leadership in the city are denying these claims.”

The department provides “all persons in our custody civil, humane and professional services, including reasonable dietary, spiritual and family-update measures that may be required,” Haddad said in a statement.

One speaker at the rally, Nabintou Doumbia, talked about her family’s struggle to deal with her father’s deportation to the Ivory Coast in November. Her father came to the U.S. in 1990 and had four kids in Detroit, and was undocumented with orders of removal from 2004. But the travel documents were never issued. He was placed on supervision in August 2018 when he was arrested during a regular check-in where the documents were being provided.

The rally was hosted by the Detroit Jews for Justice, the Council on American-Islamic Relations of Michigan and Bend the Arc: Ann Arbor.

The three representatives spoke toward the end of the event, saying their constituents have a responsibility to take on hate, while also remembering former Detroit resident Jimmy Aldaoud, a 41-year-old man who died in Iraq recently after he was deported there, despite never having been there before.

“This country is being divided by fear and hatred, and it’s wrong,” Dingell said. “We stand here today of members of all faiths that are being targeted…and we want to organize a Take On Hate effort in the next couple of weeks.”

A letter signed by Levin and 40 House Democrats on Tuesday was sent to president Trump, urging him to end the detention and deportation of Iraqi nationals living in the United States.

“We can’t allow people to be detained in conditions that are inhumane and we cannot allow separation policy to continue,” Tlaib said. “Even though the Trump administration has been continually told by the courts not to do that, they continue to do that.”