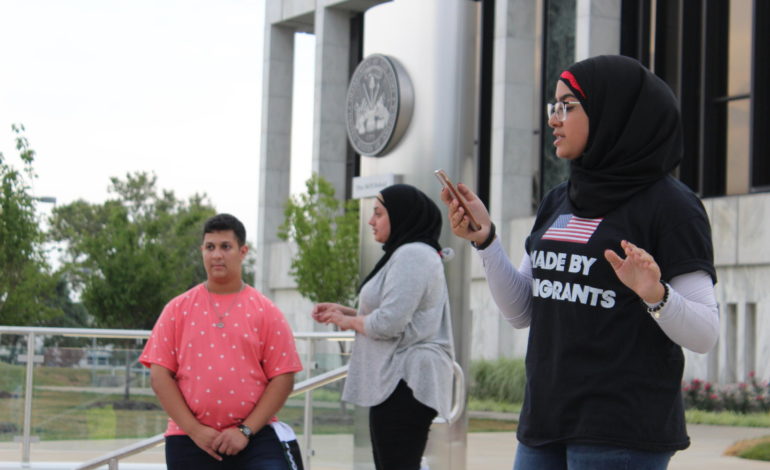 Student organizer Jenna Kobeissi speaks at rally against the city of Dearborn's involvement with ICE, outside of the Henry Ford Centennial Library on Aug. 20. - Photo by Malak Silmi

DEARBORN – On Tuesday, August 20, Dearborn City Council voted not to renew its prisoner housing contract with Calhoun County after a decade-long arrangement with Immigration and Customs Enforcement (ICE) to hold detainees.

This agreement was caused from controversy over detentions of undocumented immigrants by ICE.

The contract with Calhoun County would have been extended with an amount not to exceed $250,000 for sentenced prisoner housing and transportation for fiscal year of 2020 requesting effect.

According to the mayor’s annual report, the department housed 1,333 ICE prisoners with final deportation orders during the 2018 fiscal year.

The department has renewed contracts with Calhoun County and ICE for more than 10 years. As a result, Dearborn police would hold detainees for ICE in Dearborn’s 20-bed facility in an undisclosed location. In return, up to 20 long-term prisoners are sent to Battle Creek jail.

For their part, a protest of 50 community members was held to urge the city to end any ties with ICE. Those include students, residents and organizers who gathered at the Henry Ford Centennial Library before the council’s meeting.

Dearborn council members did not immediately respond to requests for comment. Initially, the council decided to table the item and explore other options. However, some meeting attendees expressed feelings of being shut down when the topic was postponed.

Currently, the council is looking for other alternatives to the contract. Councilwoman Erin Byrnes stated they will continue to explore options for housing of misdemeanor prisoners outside of Wayne County due to overcrowding issues; however those options will not include an ICE component.