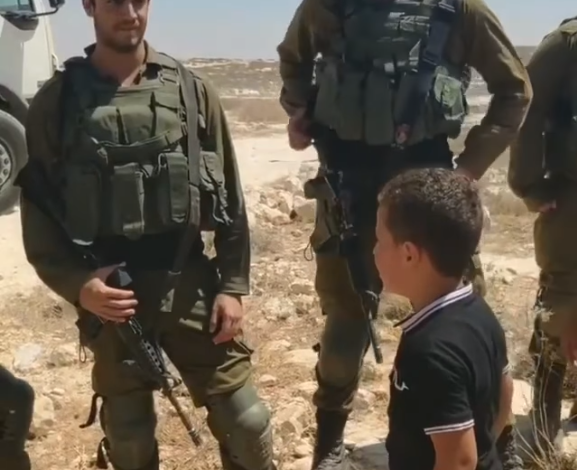 A boy named Ali asks Israeli soldiers "why?" after seeing his family's home destroyed by a bulldozer in the South Hebron Hills. Photo via Screen Capture/Eye on Palestine

DEARBORN — U.S. Rep. Debbie Dingell (D-Dearborn) shocked many in the Dearborn area and the Arab American community nationwide last week when she removed her name from the list of co-sponsors for the pending HR2407 bill, which would have barred U.S. aid from contributing to the imprisonment of Palestinian children.

Dingell has been a longtime close friend of the Arab American community and supporter of many similar causes who remains in close contact with her constituents.

But following confirmation to Middle East Eye that she no longer supported the bill, Dingell issued a statement saying that after speaking to people in her community, she felt that the bill was “ultimately counterproductive to a peaceful, two-state solution to the Israeli-Palestinian conflict.”

Dingell added that she has been “strongly critical” of unilateral moves that she says harm the prospects for peace.

“My voting record on these issues speaks for itself,” she said in an email to the website.

“I will continue working on and investing in policies that will address the human rights situation in the Middle East and work toward peace.”

Those backing the legislation say its goal was simple, however: To stop U.S. taxpayer dollars from aiding in the imprisonment of as many as 700 Palestinian minors annually, a report from Middle East Eye said.

The bill was introduced in April by U.S. Rep. Betty McCollum (D-MN) and supported by U.S. Rep.  Rashida Tlaib (D-Detroit), among others.

Dingell took time out of her schedule to visit the Islamic House of Wisdom on Sunday, accepting an invitation from the mosque’s leadership to address the issue for a brief town hall style event attended by about 30 people.

He added that he believes in respectful and honest dialogue, which was the aim of the event.

According to Imam Mohammad Ali Elahi of the IHoW, Dingell said she was sure that the bill with 20 supporters wouldn’t make it to the floor, so she decided to invest her energy elsewhere to support the future of Palestinian children in working to achieve a two-state solution.

Attendees challenged Dingell on her position, Elahi said, stating that the internationally illegal occupation of Palestine continues to spread and that a possible two-state solution has lost its relevancy at this time.

Elahi also spoke on the human tragedy affecting millions of children in Yemen, driving home the point that kids in the Middle East are suffering from the horrors of war.

Ahmad Abuznaid, a Dearborn-based Palestinian American community organizer, told the Middle East Eye that, “the truth is the two-state solution is gone”, adding that Dingell withdrew her support as Israeli Prime Minister Benjamin Netanyahu announced the annexing of large parts of the occupied West Bank.

Many community members, including Nasser Baydoun, the chairman of the Arab American Civil Rights League, were also disappointed.

“Debbie’s been a friend for a long time, we don’t agree with this decision, we’ve made our opinion known and we’ll work together to make sure that we pursue the best for the Palestinian people,” he said.

Amer Zahr,  president of the New Generation for Palestine, said that Dingell let the community down by not offering a principled, moral stance on behalf of one of the world’s most vulnerable and oppressed populations, the children of occupied Palestine.

“We’re very disappointed, many of us are angry,”  said Zahr, a Palestinian American who is also a writer, filmmaker, comedian and University of Detroit Mercy adjunct law professor.

“Standing with us is not a part-time job, it’s a full-time moral endeavor,” Zahr said. “So we won’t stand for these kinds of moves even if most of the other times she’s doing the right thing.”

He added that Dingell did not consult with his organization, the only Palestinian member organization in her district.