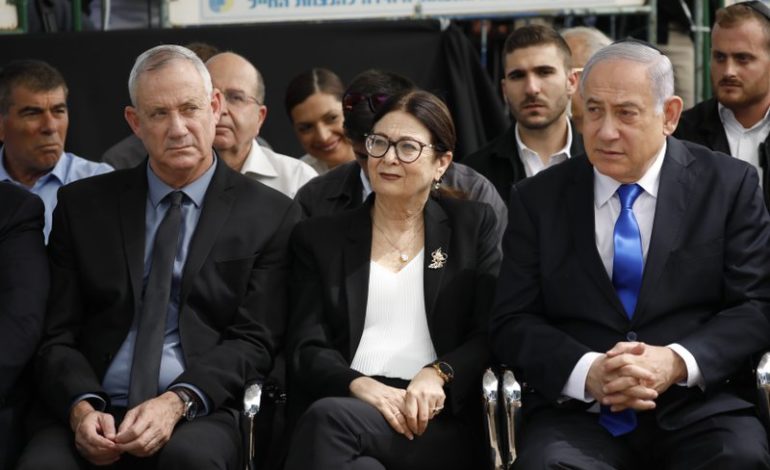 Gantz spoke at a party meeting as the new Knesset prepares to be sworn in.

“I reiterate my call,” he said. “Netanyahu, don’t hold on to your position. We will take it from here, and together we will lead the country to good places.”

Netanyahu responded to Gantz by repeating that the best way forward was a unity government between both leaders.

Referring to Netanyahu’s legal troubles and the four-day hearings on three corruption charges Netanyahu is undergoing, Gantz offered that Israel was in need of a unity government, “not an immunity government.”

“These days, there is a hearing on three serious cases,” Gantz said of Netanyahu. “I wish for you to be emerge acquitted of all charges. I don’t want to see you indicted for bribery and breach of trust.”

In response, Netanyahu pressed that he was making great efforts to form a broad national unity government and that the more than 1 million votes his party received in the last election was an indication of that this was the country’s wish.

We can’t have a three-people rotation, it’s not serious,” Lapid said. “The people of Israel deserve better. Israel needs a unity government of Kahol Lavan with Likud and Lieberman.”

The Jersulem Post reported a dashed attempt at overthrowing Netanyahu from his own party.

He took steps to ensure that he would be the only potential Likud leader who could form a government during the key three-week period when any Knesset member (MK) may obtain the support of 61 MKs to build a coalition, after both he and Gantz failed to do so.

This meant having his own environment minister persuade members of Likud’s allies on the Right to form a sign saying that Netanyahu would be their only candidate for prime minister.

Netanyahu had also prepared to hold a snap Likud primary election to hold power over the party.

This is said to be in response to MK Gideon Sa’ar, who took to Twitter to announce he was ready to lead the rebellion against Netanyahu.

Lapid chided Netanyahu’s attempt to dress such an overthrow of his leadership as a coup.

“Someone must explain to Netanyahu that elections are not a coup, running against him in a primary is not a coup and forming a government without him is not a coup,” he wrote on Twitter. “It is called democracy, and it works wonderfully.”

If Netanyahu fails to build a coalition in the coming days, he is expected to return his mandate to Israeli President Reuven Rivlin.