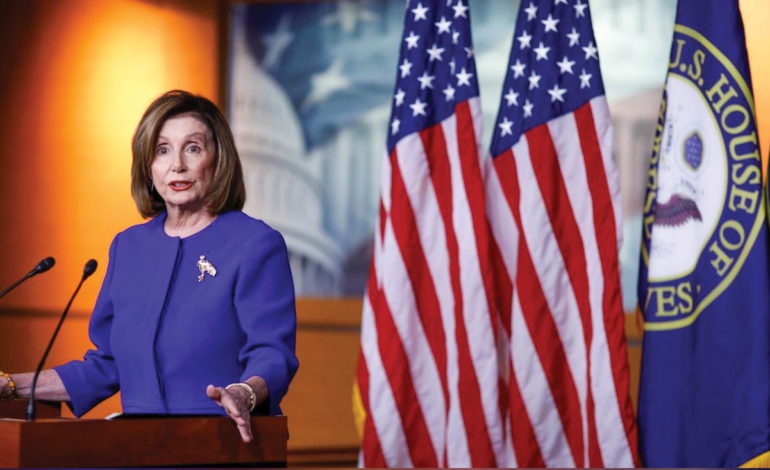 Speaker of the House Nancy Pelosi (D-CA) speaks ahead of a House vote on a War Powers Resolution and amid the stalemate surrounding the impeachment of President Trump, as she addresses her weekly news conference at the U.S. Capitol in Washington, D.C., January 9. - Reuters

WASHINGTON, D.C. — The U.S. House of Representatives voted on Thursday to stop President Trump from further military action against Iran as the Middle East remained tense after the U.S. killing of a top Iranian commander and Iran’s retaliatory missile strikes.

The resolution passed 224-194 along party lines in the Democratic-controlled House with nearly all Republicans opposed. The measure orders the termination of Trump’s war powers to use U.S. armed forces against Iran without Congress’ consent. The measure now goes to the Senate, which is controlled by Trump’s Republican Party, and faces an uphill battle.

Republicans hold 53 of the chamber’s 100 seats, but at least two Republican senators — Rand Paul and Mike Lee — have expressed support for the measure.

Democrats accused Trump of acting recklessly and backed the resolution, while Trump’s fellow Republicans, who rarely vote against the president, opposed it.

“The president has to make the case first — first, not after he launches an ill-advised attack and then comes up with a reason why it was necessary and why it was legal,” said Representative Eliot Engel (D-NY), chairman of the House Foreign Affairs Committee.

Republicans said Democrats endangered the country by trying to pass a resolution they characterized as an empty political gesture, at the start of a U.S. general election year.

“Instead of supporting the president, my Democrat colleagues are dividing Americans at a critical time,” said Representative Mike McCaul (R-TX), senior Republican on the Foreign Affairs Committee. He said the resolution would “tie the president’s hands.”

The vote came just hours after Trump said that Iranian military commander Qassem Soleimani was killed by a U.S. drone strike in Iraq last week last because he had planned to blow up a U.S. embassy.

Later, at a campaign rally in Toledo, Ohio, Trump said the leader of Iran’s elite Quds force had been planning attacks on U.S. embassies.

His remarks seemed to shed more light on what so far have been largely vague descriptions of the intelligence that drove Trump’s conclusion that killing Soleimani and disrupting his plots would be better than any fallout Washington may face.

A White House spokesman called the House-passed war powers measure “ridiculous” and politically motivated. The measure, “could undermine the ability of the United States to protect American citizens whom Iran continues to seek to harm,” an administration policy statement said.

But if passed by the Senate, the measure does not need Trump’s signature to go into effect.