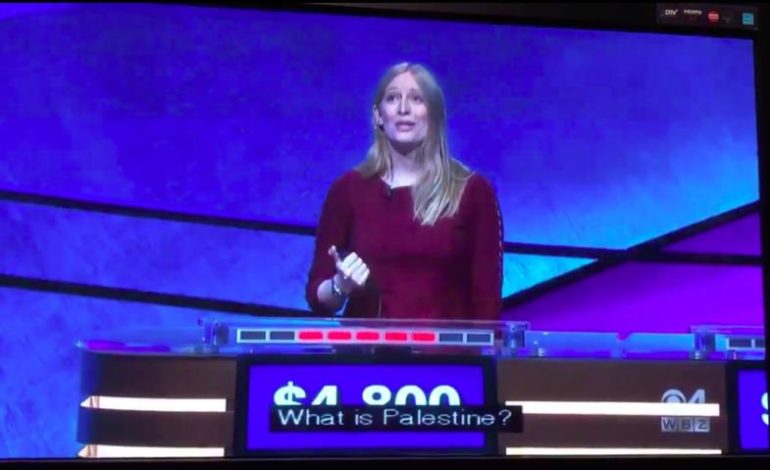 One question asked where the Church of the Nativity (of Bethlehem) is located. Katie Needle, a returning champion of the game, was the first contestant to respond and she correctly said it is in Palestine.

Jeopardy! is an American television game show that has been on the air for decades, with nearly 8,000 episodes to date. It is a trivia competition that quizzes contestants on general knowledge, and they receive cash rewards for each correct response.

In a recently broadcasted episode recorded a few months ago, one question asked where the Church of the Nativity (of Bethlehem) is located. Katie Needle, a returning champion of the game, was the first contestant to respond and she correctly said it is in Palestine. However, the show’s long-time host, Alex Trebek, told her that was incorrect. Another contestant, Jack McGuire, then gave Israel as the answer and he received the $200 reward.

But Bethlehem is in fact a city in the central part of the West Bank of Palestine. It is under the effective control of an illegal, oppressive and unjust military occupation by Israel, but it is in Palestine, nonetheless. Israel has occupied the West Bank for almost 53 years now; and with broad consensus, most countries in the world consider Israel’s occupation of Palestinian territories to be illegal under international law.

One might wonder why a false answer on an American game show even matters. After all, Jeopardy! is just a television show meant to entertain people. But in the broader picture, it is much more than that.

This particular episode was broadcasted to around 10 million Americans. Even worse, since the program is based on questions of general knowledge, answers to the show’s trivia questions are assumed to be facts. Some people who watched this episode might know that Bethlehem is in Palestine, as contestant Katie Needle correctly answered, but millions of others may be unaware of this and they are likely to accept the show’s “correct” answer as truth.

Herein lies the problem. Even when a misconception about Palestine is propagated on a seemingly trivial medium such as a game show, the true effects can be much more consequential. If only 10 percent of Jeopardy! viewers had no idea where Bethlehem is, one million people may now be under the impression that it is an Israeli city. Even worse, the show’s producers only issued an online statement the next day to explain that this was due to “human error.” They did not bother to issue an on-air correction to their viewers, most of whom probably never browse the show’s website. Instead they expressed their “regret”, but they did not even apologize.

This is not an isolated example. For a long time, Israeli and Zionist propaganda in the U.S. has helped to shape attitudes and promote misinformation about Palestine and Israel, especially through American media.

A recent study confirms the conclusions of previous academic studies on coverage of the conflict: Reporting by the U.S. mainstream media favors Israel both in terms of the “sheer quantity of stories covered and by providing more opportunities to the Israelis to amplify their point of view.” Palestinians are consistently portrayed more negatively and the Palestinian narrative is “highly underrepresented.” In fact, Israeli sources are almost two and a half times more likely to be quoted as Palestinian ones. These factors help to conceal the full context of the conflict, and they also help to propagate various myths that predominantly favor Israel.

One of these myths, which is a remnant of Orientalist descriptions of Arabs, is the implication that Palestinians are inherently violent, destructive and do not want peace. In 2014, ABC News anchor Diane Sawyer made a very serious mistake while reporting on Israel’s assault on Gaza. The program displayed two images of Palestinians standing in complete rubble and destruction, but Sawyer falsely described them as Israelis. For millions of Americans watching, this may have easily reinforced the myth that Palestinians are barbaric. In reality, it was Israel that was bombing entire neighborhoods of Gaza into smithereens. Palestinians do not even have the capability to cause the devastation pictured on the program.

The Jerusalem Fund caught this error at the time, and we uploaded a clip of it to YouTube to highlight the severe misrepresentation of Palestinians in the U.S. media. Later, ABC News and Diane Sawyer issued an on-air retraction and apologized for the mistake. But the damage was already done. How many of the millions of viewers who saw the incorrect clip also saw the 30-second retraction on another day? Maybe some, but certainly not all. For those who did not, a falsehood about Palestinians is likely to have been imprinted in their minds.

Other examples are more subtle and may seem insignificant, but they are indicative of how easily misconceptions can be planted in the minds of people who rely on the news, television and other media to “inform” them. For example, here at The Jerusalem Fund’s office in Washington, D.C., we have had many people walk in out of curiosity, with the assumption that we are a pro-Israel organization. Recently, I reconnected with an old friend from high school and we caught up with each other. When I told him that I am still working at The Jerusalem Fund, he told me that he thought it was funny that someone of Palestinian heritage would work for an Israeli organization.

In both cases, these people are not inherently against Palestinians or in favor of Israel. The problem is that they have been conditioned by the mass media (or by others who have been influenced by the media) to believe that Jerusalem “belongs” to Israel. Simply put, Zionist propaganda has been very effective in proliferating this misconception (along with any others) about Palestine. This is precisely why seemingly harmless television shows such as Jeopardy! can be dangerous for the Palestinian struggle for freedom and justice when they spread false information, whether intentionally or unintentionally.

The bottom line is that the media, along with the propaganda that it can spread, hold great power in shaping people’s attitudes and perceptions. This applies not only to Palestine and Israel, but also to all other domestic and international issues. Many people are uninformed about various topics, and the media has a responsibility to present unbiased information, especially when it comes to issues such as Palestine, where misinformation can have a very serious effect on what happens to human beings on the ground. The sooner the American media takes responsibility for the material that it disseminates, the sooner there will be justice for Palestinians.

– Mohamed Mohamed is the executive director of the Palestine Center. This story was originally published at the Jerusalem fund. It has been edited for style.

– The views in this brief are those of the author and do not necessarily reflect those of The Jerusalem Fund.