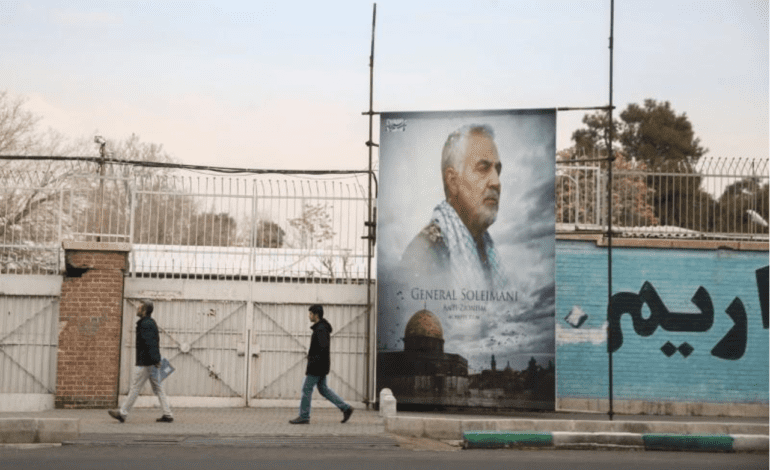 People walk past a picture of Iranian Major-General Qassem Soleimani, head of the elite Quds Force, who was killed in an air strike at Baghdad airport, as it is seen in front of the former U.S. Embassy's building in Tehran, Iran, January 21. Nazanin Tabatabaee/WANA

BAGHDAD — Iraqi Shi’a groups have exhorted Iraqis to turn out for a “million-strong” march on Friday aimed at whipping up anti-American sentiment as the United States’ struggle with Iran plays out on the streets of Baghdad.

Those behind the rally have two goals in mind — to pressure Washington to pull its troops out of Iraq and to eclipse the mass anti-government protests that have challenged their grip on power.

It is likely to end up at the gates of the U.S. Embassy, the seat of U.S. power in Iraq and the scene of violent clashes last month when militia supporters tried to storm the compound. It could turn nasty again.

The U.S. assassination of a top Iranian military general, Qassem Soleimani, in Baghdad this month has given renewed impetus to Iran’s allies in Iraq.

But it has also raised the specter of more civil strife in a country torn by years of sectarian conflict, lawmakers, protesters and analysts say.

“It created a counter-cause and a counter-crisis that pushed the protests out of the news cycle — albeit briefly.”

The call for Friday’s “million-strong” march came from cleric Moqtada al-Sadr, who opposes all foreign interference in Iraq but has recently aligned himself more closely with Iran.

Protesters, who have separately camped out for months in Baghdad and southern cities demonstrating against the corrupt the Iraqi government, fear the worst.

“This million-man march is different from what the street wants,” said Abdul Rahman al-Ghazali, a protester at Baghdad’s Tahrir Square, a center of the uprising. “It supports the current political system in the country, it doesn’t oppose it.”

Ghazali and other demonstrators said their movement risked being sidelined by the strength in numbers – and weapons – of those marching against the United States.

“I am not going to take part in the upcoming protests against America,” said student Hussein Ali.

The U.S. assassination of Soleimani and Iraqi paramilitary leader Abu Mahdi al-Muhandis in a drone attack brought Iraq and the wider region to the brink of war between Tehran and Washington.

The biggest loser is Iraq, where both powers vie for influence. More than 5,000 American troops remain in the country 17 years after the U.S.-led invasion that overthrew Saddam Hussein.

After an unlikely alliance of Iraqi forces, a U.S.-led coalition and the Iran-backed Shi’a militias defeated ISIS in 2017, Iraq went through two years of relative calm.

Unrest that broke out in October when security forces began killing mostly peaceful demonstrators shattered that calm and U.S.-Iran tension has added to the chaos.

The protests have been dominated by young people, a generation blighted by rampant unemployment, a corruption-ridden political caste and the years of conflict. Despite Iraq’s oil wealth, many people languish in poverty.

More than 450 people have been killed as security forces have fired live ammunition, rubber bullets and tear-gas canisters directly at protesters, with battles raging on three bridges over the River Tigris leading to Baghdad’s Green Zone.

Friday’s march risks clashes between the anti-government protesters and the militia supporters who back the parties that control government and parliament.

Analyst Haddad said the anti-government protests would persist, however. The authorities should not fail to form a new government, he added.

Iraqi factions have been wrangling for weeks over who will succeed caretaker Prime Minister Adel Abdul Mahdi, who resigned in November under pressure from the street.