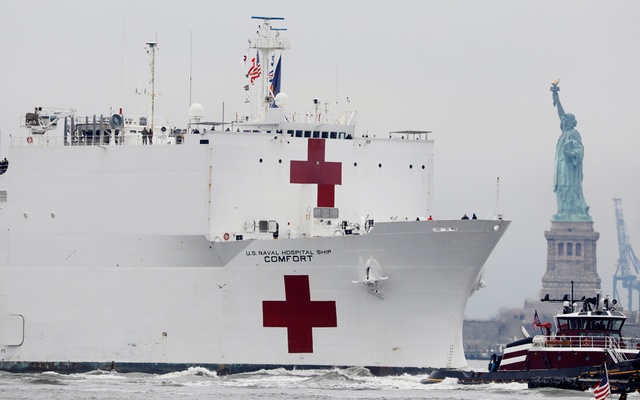 The USNS Comfort medical ship passes the Statue of Liberty as it enters New York Harbor during the outbreak of the coronavirus disease (COVID-19) in New York City, March 30. REUTERS

The United States reported more than 265,000 cases of coronavirus along with more than 6,700 coronavirus-related deaths on Friday afternoon , as the number of global cases surpassed the one million mark according to Johns Hopkins University.

Of those deaths, nearly 3,000 have occurred in New York state, where Governor Andrew Cuomo warned that New York was using potentially life-saving ventilators at a rate that would cause them to exhaust their supply in just six days on Thursday.

Amidst growing concerns over the disease and extended lockdown orders, more than 6.6 million people in the United States filed for unemployment last week, the highest number of initial claims in history, as unemployment benefits were extended and millions of Americans prepared to claim stimulus checks from the U.S. Treasury.

“It takes your breath away,” said Justin Hoogendoorn, head of fixed income strategy and analytics at Piper Sandler in Chicago, according to Reuters.

“Obviously the immediate reaction to something like that is going to be fear,” he added.

But millions of workers are unable to continue due to concerns of the virus continuing to spread.

More than 90 percent of Americans have been ordered to stay at home to help “flatten the curve”, but so far results are mixed, as both the CDC and President Trump are now set to recommend that anyone appearing in public spaces wear cloth masks to protect others around them in case of sneezing, coughing or otherwise potentially passing on the virus orally.

Texas also became the 40th state to issue a stay-at-home order on Thursday.

“It is. We are sending it directly to hospitals,” Trump said, according to CNN.

“We have asked states where they have large manufacturers of different types of equipment to use those local factories, local plants and have it made directly, ship it right into the hospitals.”

Many hospitals are also running short or fearing a shortage of ventilators, which are utilized by the most critically ill patients battling the virus and serious respiratory problems caused by the disease.

Trump said the federal government is holding 10,000 ventilators to deploy them to areas where that become overwhelmed with patients.

General Motors and Ford are among the companies tasked with meeting demand, but many hospitals, especially those in New York City and even locally in the Detroit area, are gasping for help as the number of cases continues to increase.

Meanwhile, a prestigious panel of scientists told the White House Wednesday night that research has shown that coronavirus can be spread by talking or breathing, although the man who wrote the letter, Dr. Harvey Fineberg, chairman of a committee with the National Academy of Sciences, added that it is not as infectious as tuberculosis or the measles.

He said that he would follow the CDC recommendation and begin wearing a mask to the grocery store, according to CNN.

“While the current [coronavirus] specific research is limited, the results of available studies are consistent with aerosolization of virus from normal breathing,” Fineberg wrote in the letter, sent Wednesday evening in response to a query from Kelvin Droegemeier with the Office of Science and Technology Policy at the White House.

According to a scientific brief posted by the World Health Organization on March 27, there isn’t sufficient evidence to suggest that SARS-CoV-2, aka COVID-19, is airborne, except in a handful of medical contexts or in relatively large droplets that typically are too heavy to hang in the air.

But experts who work on airborne respiratory illnesses and aerosols say that gathering unequivocal evidence for airborne transmission could take years and cost lives, according to a report from Nature.com.

“In the mind of scientists working on this, there’s absolutely no doubt that the virus spreads in the air,” said aerosol scientist Lidia Morawska at the Queensland University of Technology in Brisbane, Australia. “This is a no-brainer.”

The WHO writes in its latest scientific brief, however, that the evidence of viral RNA found in the air in exposure experiment sites, such as one undertaken at the University of Nebraska recently, “is not indicative of viable virus that could be transmissible.”

The brief also points to its own analysis of more than 75,000 COVID-19 cases in China that did not report finding airborne transmission.

“If you’re breathing aerosolized virus, we don’t know what the infectious dose is that gives a significant chance of being infected,” said Jamie Lloyd-Smith, an infectious diseases researcher at the University of California, Los Angeles.