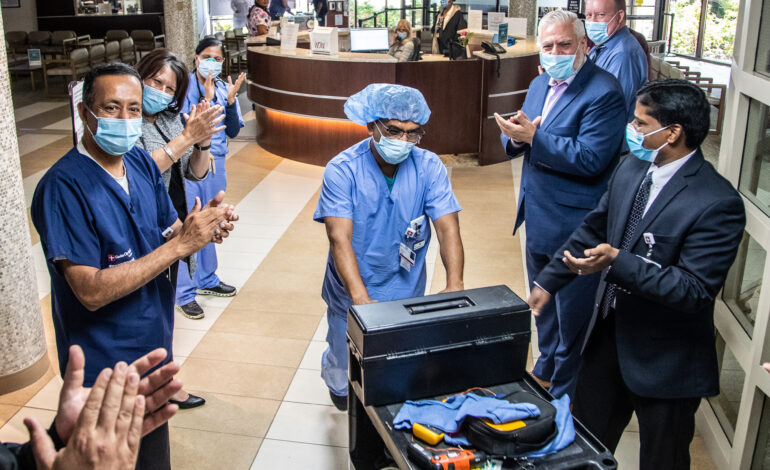 Healthcare workers at Garden City Hospital were thanked and celebrated on Monday for their service during the COVID-19 crisis. – Photo by The Arab American News

GARDEN CITY — Healthcare workers at Garden City Hospital were thanked and celebrated on Monday for their service during the COVID-19 crisis. Doctors, nurses and other front line staff came together with hospital officials in the celebration.

Those in attendance also took a knee in support of racial equality and nation-wide protests over the murder of George Floyd and others by police in the U.S.

Some staff wore superhero costumes, in a recreation of a popular meme that emerged during the COVID-19 pandemic, in which hospital workers walk down a hallway while Marvel and DC superheroes bow to them.

“We truly hope that by standing together, we can challenge inequalities and social justice around us,” Garden City Hospital CEO Saju George said at the gathering. “We (must) take a lead in this cause and together we will come out stronger as a community and as an organization.”

The staff and other attendants took a knee and observed a moment of silence for eight minutes. The arrest complaint for Derek Chauvin, the former cop who killed Floyd, showed he placed his knee on Floyd’s neck for nearly 8 minutes and 46 seconds, while Floyd struggled for air.

George also thanked all members of the hospital staff for almost four months of fighting the virus and helping the community recover.

“I think this 8 minutes and 46 seconds are going to change our nation,” Siblani said. “It is up to us how we change it. (Our diversity) is what makes us a great nation.”

Siblani thanked healthcare workers for their sacrifices during the pandemic. Garden City is located within Wayne County, one of the most populous and worst hit in the state.

“We are going through one of the most difficult times in the modern history of the United States,” Siblani said. “We are faced with tremendous challenges, but this is America, the greatest country in the world. And it didn’t become great by accident; it’s because of who we are.”

Garden City Hospital is located on Inkster Road and has more than 350 physicians and a state-of-the-art facility with more than 300 beds. It has been part of the Prime Healthcare Services system since 2014.