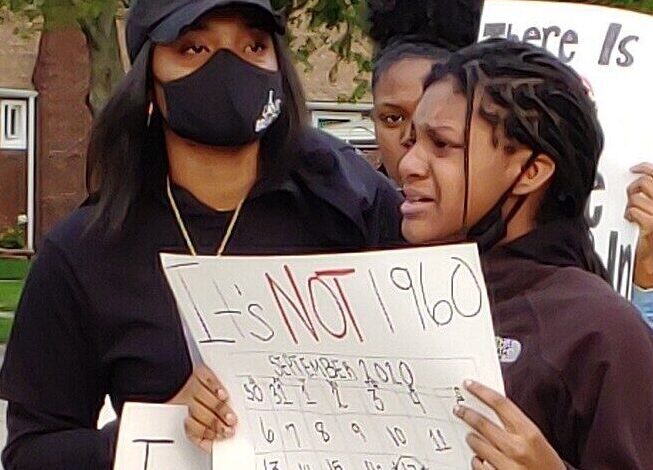 DEARBORN HEIGHTS — After being silenced at Wednesday’s School Board meeting, some district parents held a protest outside of the District 7 Board of Education building Thursday morning.

Leslie Windless, who organized the protest, said that Black students and parents need to have their voices heard.

“You can’t say there’s a zero tolerance policy when kids are not suspended or reprimanded for making these comments,” she told The Arab American News prior to the protest. “They are trying to silence this parent and they refuse to address the whole problem.” 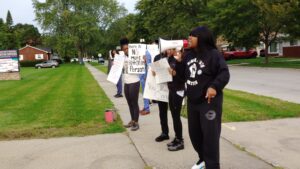 A protest against racism in schools held outside of D7 Board of Education building. Photo: Briana Gasorski, The Arab American News

The topic was first brought up during an Aug. 25 Dearborn Heights City Council meeting when parent Barbara Young and her two children told the City Council about being asked for an “n-word pass” and being racially intimidated in the schools.

During the protest, Windless said that the school board cannot continue to bully Black students.

Windless said that the new zero tolerance policy should include the resignation of Mast.

“Our new zero tolerance policy should be no Ms. Mast,” she said. “No Phil Shannon, no Mandy Diroff. If you’re racist, you leave Dearborn Heights. I’m not going anywhere and my kids aren’t going anywhere. And anybody in there that sits there and watches as adults discriminate against children, you are a part of the problem.”

“Black kids can’t be safe in the streets, the one place they should feel safe is the schools and they can’t do that, either, because you think racism in your schools is OK. If you don’t want us here, then give me my property taxes back.” 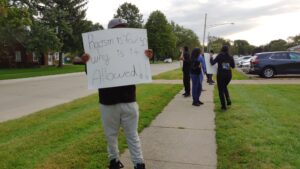 Protesters outside of D7 Board of Education building. Photo: Briana Gasorski, The Arab American News

When someone on the school board appeared to be making a phone call, Windless said that they were probably calling 911.

“In 2020, you all are intimidating Black children from going to school,” she said. “Simply from me talking, you’re already on a phone call to 911, because you’re racist. I’m not a threat, we are on a public subject.

“Go ahead and call them up, I already snitched on myself, by the way. 911, there’s a loud Black woman out here and she’s tired of me being racist, come get her.”

Windless had gotten approval to have the protest by notifying Dearborn Heights Police Chief Mark Meyers of her intentions in advance.

“We are 100 percent in support and for people exercising their rights to peaceful protests,” he said. “We did have someone there just to make sure that everyone was safe on all sides. My priority is the safety of our community.”

At the end of the protest, another parent, Sheila Hines, told her story about her two autistic children who had issues in the schools previously.

“In March, one of my kids actually ran away from school and I found out that one was made to sit in fecal matter for over two hours,” she said. “Schools asking for their records to be transferred are being turned down and I wasn’t even allowed to change my daughter’s clothes inside the school. I had to take her to the parking lot to change her clothes.”

While Mast said she is unaware of this situation happening, Barbara Young’s husband, Anthony Young, said that the school board and staff need to start doing something.

“Teachers are afraid of infringing on rights,” he said. “I saw a lot of things and I got in trouble for trying to hold students accountable because of the mentality that winning was most important, but the teachers hear it all of the time.

“Taking the effort to point out in an email that my children aren’t residents of the city makes me feel that they believe my family means nothing to them. Basically like saying we don’t matter because we can’t vote for them. They need to do more. They can’t keep hiding it.”

While both of the Youngs’ children experienced racial discrimination, Windless said so did her children. 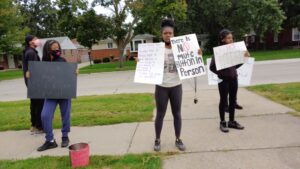 Protesters outside of D7 board of education building. Photo: Briana Gasorski, The Arab American News

“She never formally reported being asked for the pass because it happened so often and in front of the staff that she believed that it didn’t matter to them,” she said of her daughter, Angel. “She believed it was no big deal.

“We need to hold our children accountable and we need leaders who take accountability and acknowledge that this is happening. This is about what is right and what is wrong.”

When notified of the meeting and the events afterwards, Mayor Daniel Paletko said that while he normally does not get involved in the school board issues, this is too important of a concern.