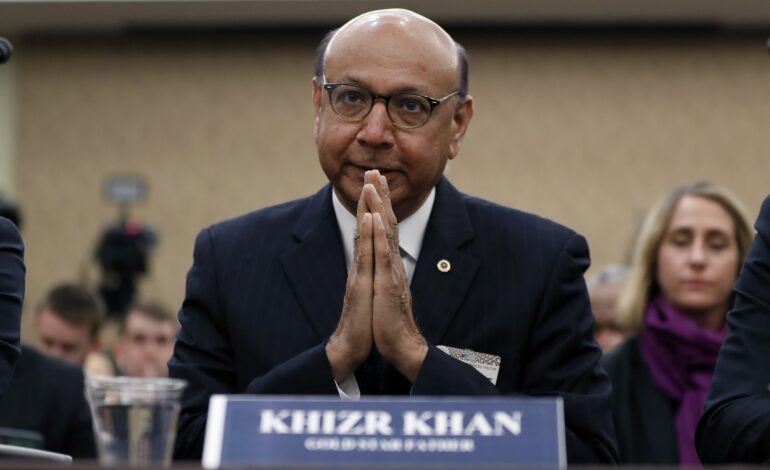 The Pakistani American father of a U.S. Army captain, who died while serving in Iraq in 2004, says Joe Biden will bring compassion and decency to U.S. foreign policy. Photo: AP

DEARBORN — Khizr Khan, the Muslim American parent of a slain U.S. army captain who rose to prominence in 2016 while campaigning for Hillary Clinton and calling out then-candidate Donald Trump for his anti-immigrant stance, is back in the pre-election fold.

Khan, who is Pakistani, is again criticizing President Trump, this time for his response to COVID-19, not to mention Trump’s alleged disrespect of deceased American soldiers. Khan has now teamed up with Democratic presidential nominee Joe Biden’s campaign to argue that a Democratic win in November spells a return to the American promise of economic and social equality, decency and an end to Trump’s war on immigration.

Khan spoke to The Arab American News over the phone from his home state of Virginia this week.

“Michiganders are some of the finest citizens of this country,” Khan said. “I’ve enjoyed their hospitality and decency (in the past). I’ve been to Detroit and Dearborn and have been impressed with the diversity.”

Khan said places like Dearborn were a true reflection of the greater country, in terms of diversity, hard work and family values. In 2016, Khan was honored in the city by the Arab American Civil Rights League (ACRL) at its annual Fight for Justice gala.

“I wish to express my condolences to the families of some 6,800 that have lost their lives due to the coronavirus,” Khan said. “I urge Michiganders to take the virus seriously and help stop the spread. I am saddened to see the lack of seriousness and the recklessness displayed by the president and by Republicans in dealing with this virus.”

Khan not only urged Michiganders to consider the Biden/Harris ticket, but wholeheartedly endorsed Senator Gary Peters, calling him a “true representative of Michigan values.”

“Because of the unwise policies of Donald Trump and his mute, enabler Republicans, America stands alone in the world,” Khan said.

If you read the Biden/Harris immigration policy paper, the very first line says that American values of immigration will be restored under their administration, which speaks volumes — Khizr Khan

“America’s standing in world affairs was, and soon will be, that of deterrence against those who wish to violate democratic values and equal dignity of people throughout the world. The balance of power in the world is being realigned by America not properly being on the world stage.”

While voting early in Virginia this week, Khan said he was overwhelmed by the thought of thousands of children, asylum seekers, who had been separated from their families and put in holding camps under Trump’s reign.

“Why I feel hopeful on the other hand is because if you read the Biden/Harris immigration policy paper, the very first line says that American values of immigration will be restored under their administration, which speaks volumes about the contrast between the current administration’s versus Joe Biden’s (proposed) policies,” Khan added.

Khan could not say whether Biden has promised an end to U.S. military ventures and ongoing global presence, which led to the death of his son while serving in Iraq. He did say, however, that Biden was a military parent and was aware of the heavy price military families pay for war.

“Under Biden, America’s foreign policy will reflect that realization,” Khan said. He added that he is not privy to any details of Biden’s possible rollback of the U.S.’ global military engagements, but said he knew Biden to be a caring and decent human being.