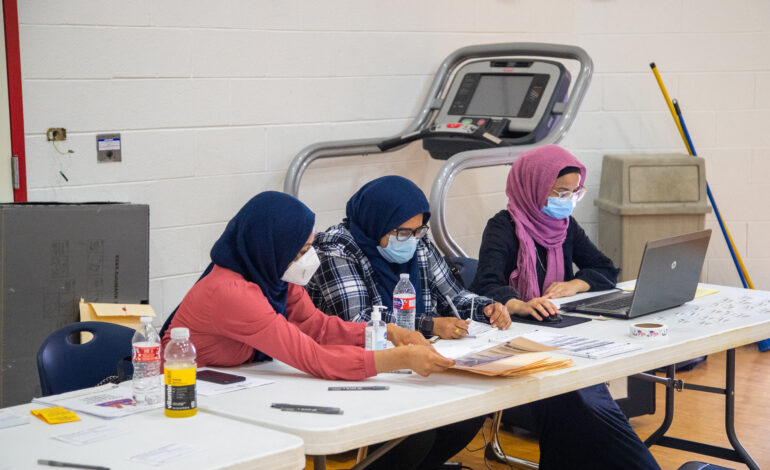 MICHIGAN — As clerks, election workers and municipal governments brace for Election Day, Michigan officials are now ensuring that polling places will be safe, clean and accessible.

Michigan Secretary of State Jocelyn Benson said on Monday that election workers were taking precautions and are well equipped with masks, gloves, cleaning supplies and protocols for hygiene and social distancing.

“We have already held two successful elections since the COVID-19 pandemic came to Michigan, and voters can go to the polls tomorrow confident that protecting their health and safety is our highest priority,” Benson said. “All election workers are required to wear masks, all voters are strongly encouraged to do so and my administration has provided masks, gloves, sanitizer and more to jurisdictions statewide.”

2.9 million Michigan citizens have already cast absentee ballots, which is approximately 60 percent of the expected total turnout. This successful early voting scenario will drastically reduce the potential for crowded polling places and lines, and will help keep voters safe. Michigan’s Department of State (MDOS) has provided a breakdown by jurisdiction of absentee voting data, available here.

Voters will also be safe from intimidation and harassment, Benson said on Monday. The Michigan Court of Appeals recently struck down an effort to ban the open-carry of firearms within 100 feet of polling locations. The decision was quickly appealed in the state’s Supreme Court. No matter how that battle plays out, intimidation of voters is still illegal in the state.

“The bottom line is that voter intimidation is illegal,” Benson said. “As the Court of Appeals confirmed, anyone who intimidates a voter in Michigan by brandishing a firearm is committing a felony and this is enforceable by Michigan State Police and local law enforcement.

“As Michigan’s chief elections officer, I have a duty to protect every voter and their right to cast their vote free from intimidation and harassment. The attorney general and I are working with state and local law enforcement agencies to ensure the law is followed statewide.”

“Not worried one bit”

The Arab American News reached out to Hamtramck City Clerk August Gitschlag to find out whether there were concerns of intimidation at the several polling locations in his city.

“Not worried one bit,” Gitschlag said. “Our police department is alert and aware of the potential, as are our precinct workers.”

Gitschlag also said he had no evidence or indication of voting fraud in this election. Such allegations, made by mostly White residents in the city’s social media groups, talk of voter fraud among Yemeni and Bengali voters and candidates in Hamtramck. No direct evidence of such schemes is provided or turned over to authorities, echoing unsubstantiated claims of voter fraud made by President Trump.

The topic comes up every election and a 2017 investigation by state police seems to have led nowhere. In 2014, however, four men did plead guilty to felony charges for illegally handling absentee ballots.

“I have only reported such activity in our local elections, never our federal or statewide,” Gitschlag said.

Voters in Michigan can find their polling place location at michigan.gov/Vote. They are encouraged to bring photo identification with them, but will be allowed to vote without it. Additionally, if a voter requested and received an absentee ballot but has decided to vote at their polling place, they should bring the absentee ballot with them, although they will be allowed to vote without it.

Every polling place will also be equipped with a Voter Assist Terminal, designed for voters with disabilities and available for anyone to use. Depending on the county they live in, voters will use one of three types of machines, and the MDOS has created tutorials for using all three in partnership with disability experts and advocacy groups. Voters can determine which type of machine is in their county at by visiting the Accessible Voting page at michigan.gov/Vote.

Unregistered citizens who are eligible to do so may register and vote at their city or township clerk office until 8 p.m. Tuesday, Election Day, Nov. 3. They must bring a document verifying residency, such as a utility bill, school ID or government mail with their address. Digital copies are acceptable. Clerk office locations can also be found at michigan.gov/Vote.