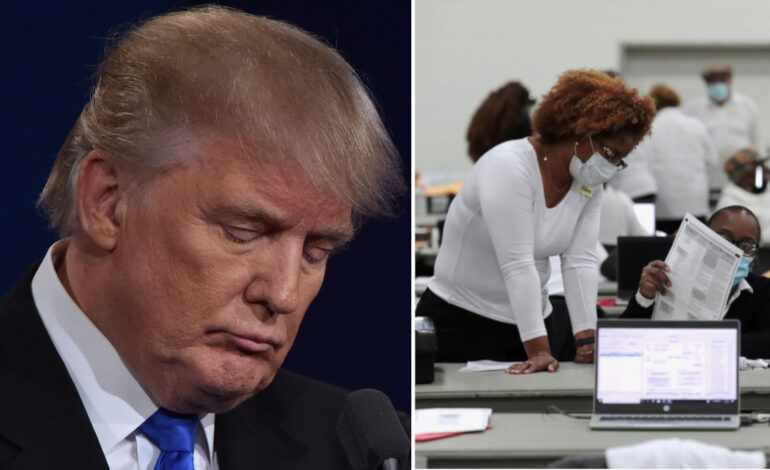 Trump failed to stop the count in the key battleground state, which he lost in Tuesday's election

On Thursday, a judge in Michigan tossed out a lawsuit brought by the campaign in hopes of halting vote counting. Joe Biden won the state by almost three percentage points. Arab Americans joined other voters in Wayne County to overwhelmingly vote Trump out of office.

Michigan Court of Claims Judge Cynthia Stephens made the ruling during a court hearing on Thursday. She said she planned to issue a written ruling on Friday.

The court ruled the lawsuit filed by the Trump campaign against Michigan Secretary of State Jocelyn Benson was unlikely to succeed on the merits and denied a request by plaintiffs for immediate relief to stop the counting of ballots.

“We are pleased with Court of Claims Judge Cynthia Stephens’ swift action in today’s hearing on Trump v Benson to deny the relief requested by plaintiffs. She identified the same defects in the campaign’s filings as we did, namely a complete lack of any evidence of wrongdoing on the part of election officials, and meritless legal arguments. Michigan’s elections have been fair, transparent and reflect the will of the voters, and we will continue to defend against any challenges that claim otherwise.”

Trump’s campaign began its legal assault on the election in Michigan on Wednesday. The campaign announced that it had filed a lawsuit in the state to stop the counting of ballots in the presidential election.

“We have filed suit today in the Michigan Court of Claims to halt counting until meaningful access has been granted,” the campaign said in a statement. “We also demand to review those ballots which were opened and counted while we did not have meaningful access.”

Trump’s campaign also tried a similar maneuver in the battleground state of Georgia. Like Michigan, that case was tossed out on Thursday.

The campaign said it had not been provided meaningful access to numerous counting locations to observe the opening of ballots and the counting process, as guaranteed by Michigan law.

Trump’s campaign also tried a similar maneuver in the battleground state of Georgia. There the campaign alleged that 53 late-arriving ballots were mixed with on-time ballots. Georgia Superior Court Judge James Bass said there was “no evidence” that the ballots in question were invalid. Like Michigan, that case was tossed out on Thursday.

On Wednesday, another lawsuit was filed in a Michigan court against Detroit’s City Election Commission, the Detroit City Clerk and the Wayne County Board of Canvassers, seeking to set apart as many as tens of thousands of ballots that were “improperly completed by Wayne County election board officials and Democratic election observers.” The lawsuit claimed that only Democrats completed and returned numerous initially rejected ballots, in violation of the law.

To count as a vote, a new ballot is to be filled in by hand and submitted to the machine. Under Michigan law, both a Democrat and Republican observer must agree to the changes on the ballot and the initial rejected ballot is to be set aside.

“This is about protecting the integrity of Michigan’s election,” said Phill Kline, director of the Amistad Project, which is supporting the amended lawsuit. “The ballots in question need to be quarantined and closely reviewed by members of both parties.”