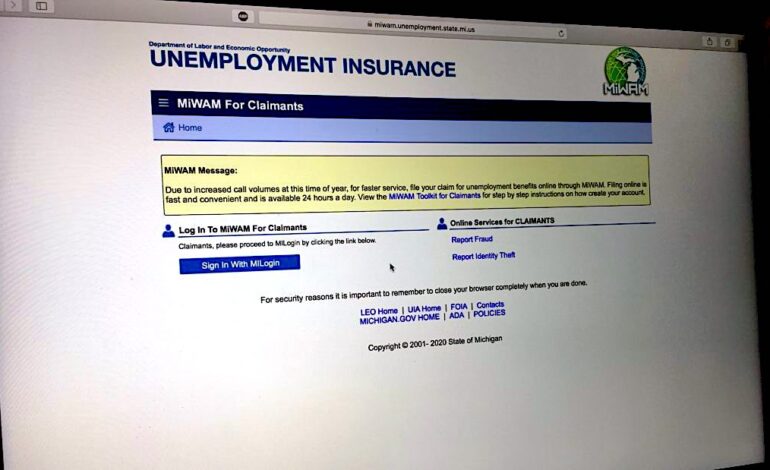 Michigan workers who had returned to work after being on unemployment are urged to reopen their claims online if they are facing temporary unemployment again.

LANSING — Michigan workers who had returned to work after being on unemployment are urged to reopen their claims online if they are facing temporary unemployment again.

The Unemployment Insurance Agency (UIA) released this information as the state’s COVID-19 restrictions are set to be tightened during a three week “pause” from Nov. 17 until Dec. 8.

With the shutdown of indoor dining at restaurants, in-person learning, bowling alleys, movie theaters and more, the UIA issued a statement saying that those who were previously on unemployment during the first few months of the shutdown can reopen their claims online.

The UIA suggests not creating a new account, but to use the same MiLogin and MiWAM username and password that was previously used.

It also suggests reopening the claim on the first day of unemployment or reduced work hours and wages and having the Employer Account Number (EAN) or Federal Identification Number (FEIN) available. The EAN or FEIN can be provided by your employer or on your W-2.

While claimants should read and respond to all requests for information to avoid payment delays, payments will be made using the same payment method previously selected.

When certifying for benefits, residents are urged to ensure they are reporting their gross earnings (amount before taxes and other deductions) in the week in which they were earned, not when they were paid. Once the claim is completed, a confirmation page will display the date of the next certification.

“The UIA has increased capacity, improved workflow and other internal systems, and reduced red tape to meet the unprecedented level of claims that have been filed since the pandemic began,” acting UIA Director Liza Estlund Olson said. “These efforts have positioned the agency to better deal with large fluctuations of demand if necessary.”

Officials also said that the server capacity has been increased to ensure demand spikes related to MiWAM account access can be accommodated.

The UIA has also increased its staffing from 650 employees to more than 2,000 employees to answer phones through its call center, answering questions online, solving technical issues and adjudicating claims.

The UIA encouraged employers to also file claims online on behalf of their full-time employees who are temporarily or permanently laid off to help better manage the accuracy of the information provided to the UIA.

The UIA also encouraged employers looking to avoid layoffs or bring employees back from unemployment to use the state’s Work Share program, which has provided $475 million in benefits and helped nearly 2,700 Michigan employers since March 15. The program allows job providers to retain their skilled workforce and avoid layoffs by reducing employee hours while employees collect partial unemployment benefits to make up for the lost wages.

“Since March 15, over 2.3 million certifying, potentially eligible claimants have applied for state and federal benefits, with over $26 billion in benefits paid to over 2.2 million workers, or roughly 96 percent of potentially eligible, certifying claimants,” UIA said in a release. “There are currently around 71,000 claimants needing ID verification and around 9,000 in the adjudication process which requires a one-on-one review of their claim.”