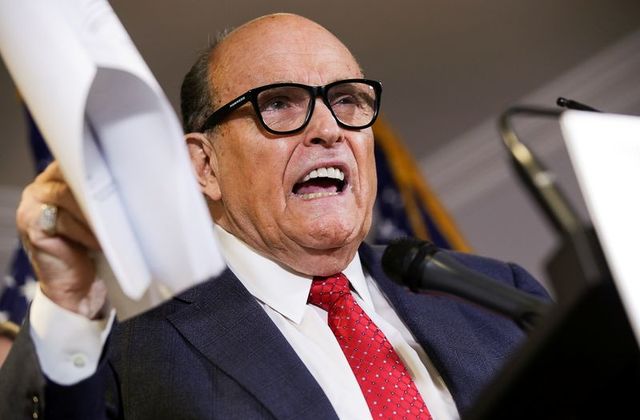 President Trump’s top ally and personal lawyer Rudy Giuliani has tested positive for COVID-19, while he travels the country challenging results of an election Trump lost by most accounts.

News of the former New York mayor having contracted the virus came from the outgoing president himself. Trump tweeted that his lawyer had “tested positive for the China Virus” on Sunday. Trump often calls the global virus the “China Virus” when he and his inner circle aren’t busy diminishing the virus’s seriousness.

“@RudyGiuliani, by far the greatest mayor in the history of NYC, and who has been working tirelessly exposing the most corrupt election (by far!) in the history of the USA, has tested positive for the China Virus,” the tweet read.

.@RudyGiuliani, by far the greatest mayor in the history of NYC, and who has been working tirelessly exposing the most corrupt election (by far!) in the history of the USA, has tested positive for the China Virus. Get better soon Rudy, we will carry on!!!

Reuters reported that Giuliani was at Georgetown University Hospital in Washington, D.C. on Sunday, though he may not have been admitted yet.

Giuliani has been the leading the charge in attempting to overturn results of key battleground states, including Michigan, where Joe Biden led in the Nov. 3 election. So far, Trump’s legal team’s attempts have not overturned results in any state, many of which have already certified their results. Trump paid for a $3 million dollar recount in Wisconsin, which actually gave Biden 87 more votes.

The Electoral College casts votes on Dec. 14. Five final states, including California, will certify their results this week. The campaign’s strategy is now to get GOP supporters in state legislatures to ignore the popular vote in their states and switch to electors that will vote for Trump, an unlikely scenario. Republican legislative leaders in Michigan and other states where Biden won have said they have found no reason to overturn their state’s elections results.

Judges in those states have thrown out cases submitted by Trump’s legal team and Trump supporters for lack of credible evidence. State and federal officials, including U.S. Attorney General William Barr, have said there is no evidence that widespread fraud on any significant scale occurred during the presidential election.

Giuliani is the latest in Trump’s inner circle that has tested positive for COVID-19. His son Donald Trump Jr. tested positive last month, after close to 40 cases in that circle including the president and his wife, Melania, and former top advisor Kellyanne Conway.