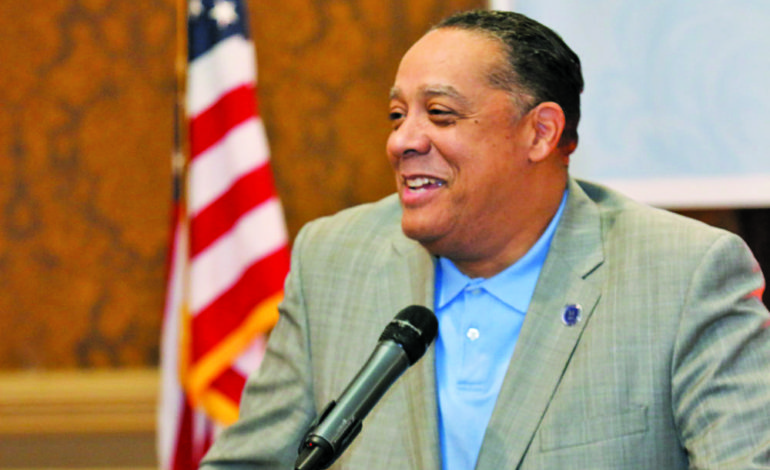 DETROIT — Wayne County Sheriff Benny Napoleon has lost his battle with COVID-19. He was 65. Napoleon had been on a ventilator since late November.

“He was a beloved, iconic and respected law enforcement official. He was progressive and he was old school,” Wayne County Prosecutor Kym Worthy said. “He was tough and he had a heart of gold. But most of all, he was a genuine, caring and loyal friend and colleague. I will miss him forever.”

U.S. Rep. Rashida Tlaib (D-Detroit) also made a statement about the late sheriff.

“This is a hard one for our Wayne County community,” Tlaib said. “He had a big heart just like his smile. I pray for his children and family during this difficult time. Rest in peace, sheriff.”

“Rest in peace, Benny,” said Osama Siblani, The Arab American News publisher. “We lost a friend and a leader. Our sincere condolences to his family, friends, colleagues and the entire community.”

“My big brother and respected mentor has left us too soon,” Jaafar said. “He left this world a better place for us, you were loved by everyone and your memory will live forever in our hearts. Please pray for his family and all who loved him as I share this incredible grief with so many. Rest In Peace Sir.”

“We enjoyed a close relationship since the time I took office, including working feverishly together last spring to bring much-needed PPE to his department to protect his deputies, who he cared so deeply for,” Nessel said. “I could always count on Benny for his support, his input and his cooperation. He was a wonderful man and his passing is a loss not only for his family, but also for his many friends and co-workers.”

“This news comes as a great loss to not only those of us who knew and admired him, but to the entire community,” said Wayne County Chief of Staff Assad Turfe. “Benny devoted his life to public service, and did so with passion and conviction. His infectious smile would fill up the room. Benny was loved and admired by all. He was not only a great leader, he was also a good friend. My deepest condolences go out to the Napoleon family and the entire Wayne County Sheriff’s Office.”

Napoleon was diagnosed with COVID-19 on Nov. 19 and hospitalized two days later. His daughter Tiffani continued “to enlist the prayers” from friends and supporters and dispelled rumors of his death, just hours before news of his passing at a local hospital was confirmed. She had been actively updating the public on her father’s condition, saying last Sunday that her father “continues to improve.”

Napoleon was a Detroit native and a graduate of Cass Technical High School, the University of Detroit Mercy and the Detroit College of Law. He began his law enforcement career in 1975. He was Detroit police chief from 1998 to 2001 and replaced Wayne County Executive Warren Evans as Wayne County sheriff in 2009.

During his 11 year tenure as sheriff, he once unsuccessfully ran against Mike Duggan for mayor of Detroit.

Napoleon’s brother and Highland Park Police Chief Hilton Napoleon was placed in an intensive care unit after testing positive for COVID-19 in March, from which he recovered after 71 days of hospitalization.