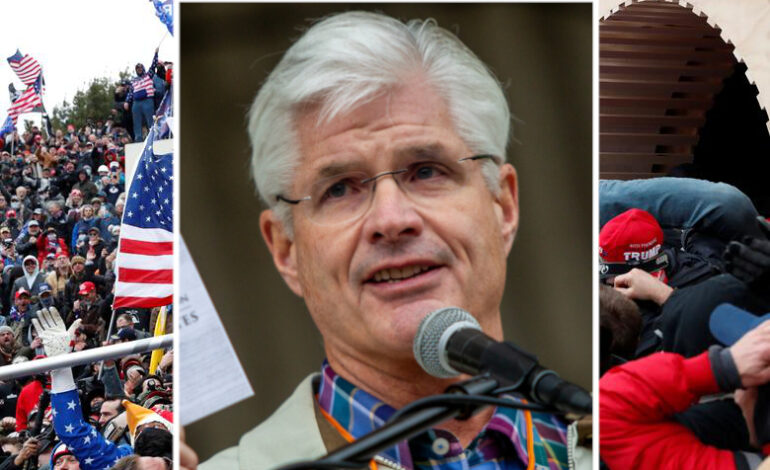 Michigan GOP leader Mike Shirkey (R-Clarklake) was caught on hot mic telling Lt. Governor Garlin Gilchrist II that he does not take back any of the statements he has made recently, just a day after publicly apologizing for them. Original photo: AP

LANSING — Michigan GOP leader Mike Shirkey (R-Clarklake) says he doesn’t take back earlier disturbing comments, just a day after he made a statement apologizing for those comments, including disturbing threats of violence against Governor Whitmer, continued efforts to encourage militia groups in the midst of a global pandemic and encouraging dangerous conspiracy theories.

Shirkey was caught on tape last week speaking with leaders of the Hillsdale County Republican Party, calling the Jan. 6. Capitol riot by supporters of former President Trump a “hoax.”

“That wasn’t Trump’s people,” Shirkey said, as reported by The Metro Times. “That’s been a hoax from day one. That was all prearranged. It was arranged by somebody who was funding it. … It was all staged.”

Through arrests and investigations, authorities have confirmed the voluntary involvement of people in the riot, people who were egged on by Trump, who said the November 2020 election was stolen from him and the they had to “fight like hell” to save his presidency. Trump, who was impeached last month for his role in inciting the deadly riot on the Capitol, is currently on trial in the senate.

Strangely enough, he also said that though these weren’t Trump’s people, Capitol Police should not have shot rioter Ashli Babbitt, who was trying to break into a lobby as rioters threatened to kill members of Congress, who were counting the electoral votes for the election Trump lost. It is not clear whether Shirkey and conspiracy theorists believe Babbitt was herself a paid rioter or a true Trump supporter.

Shirkey later apologized for those comments, saying “I regret the words I chose and I apologize for my insensitive comments.”

But on Wednesday, Shirkey was captured on a hot mic on the Senate floor telling Lt. Governor Garlin Gilchrist II that he does not take back any of the statements he has made recently.

In the video Shirkey said he and his legislative colleagues had “spanked (Whitmer) hard on budget, spanked her hard on appointments” and that he had contemplated inviting Whitmer to “a fistfight on the Capitol lawn.”

Above: Footage of a meeting between MI Sen. Mike Shirkey (R-Clarklake) and the Hillsdale County Republican Party members

He did play down accusations of voter fraud in Michigan, saying that Trump did lose Michigan, but indicated there could have been election theft elsewhere. Cybersecurity officials, the Justice Department and several judges, all appointed by Trump himself, have said there is no shred of evidence of widespread voter fraud in the election won by President Biden.

“…despite the staggering impact that this virus continues to have on us all, the Senate majority leader is shirking his responsibility to face the crisis at hand, instead doubling down his focus on attacking Governor Whitmer — literally threatening her to a fistfight on the Capitol lawn — and emboldening violent extremists,”  Gilchrist said on Wednesday. “While the Senate majority leader made a half-hearted attempt to address his inexcusable language and behavior last night, and an even weaker attempt during a prayer in today’s Senate session, his comments toward me on the Senate floor this morning tell a different story.

“It is clear that his so-called apology was not heartfelt, nor did it come from a place of humility and understanding. Rather, it was an empty gesture made for political expediency and one that the people of Michigan can see right through.”