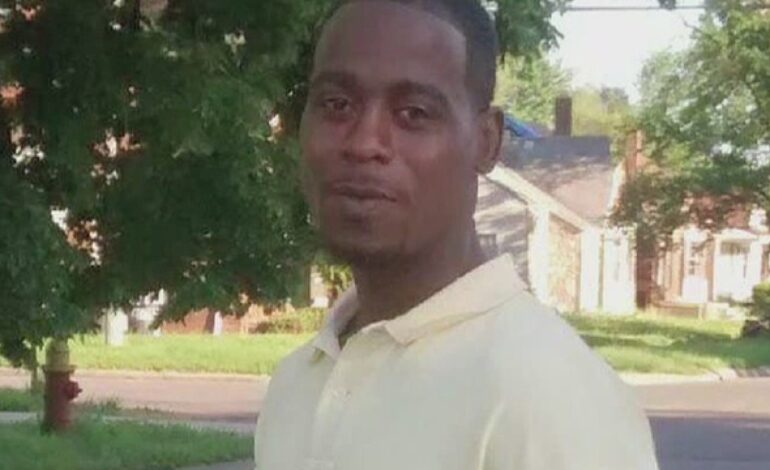 The city of Dearborn has agreed to a $1.25 million settlement in a lawsuit over the fatal police shooting of Kevin Matthews in 2015.

DEARBORN — The city of Dearborn has agreed to a $1.25 million settlement in a lawsuit over the fatal police shooting of an unarmed Black man in 2015.

Kevin Matthews, 35, had been chased on foot and killed after being accused of stealing an energy drink from a gas station on Dec. 23, 2015.

Matthews had had a history of mental illness and had been recovering from a broken arm at the time of the deadly incident. According to the police account, Matthews stood over officer Chris Hampton, 33, in a driveway, pulled the ammunition magazine from the officer’s belt, which was next to his firearm. The officer, still on his back, shot nine times, killing Matthews.

Hampton had insisted in a lawsuit deposition that he was on the ground and that Matthews was standing over him, trying to get his gun.

The settlement between the city and Matthews’ family comes just weeks after Hampton, a 10-year veteran of the police force, died by suicide.

Hampton’s body was found on Nov. 25 near the Southfield Freeway and Michigan Avenue.

Had this been on a body camera, there’s no doubt that Officer Hampton would have been prosecuted — attorney Milt Greenman

Matthews was shorter and 75 pounds lighter than the officer.

Experts hired by lawyers for Matthews’ family said they believed Hampton had been shooting downward as two bullets were found under Matthews’ body.

There were no witnesses or video of the incident.

Attorney Milt Greenman said this was an egregious killing.

“Matthews’ family wants to move forward,” he said. “With Officer Hampton having passed, how he passed, that’s generally why the case was resolved. Had this been on a body camera, there’s no doubt that Officer Hampton would have been prosecuted.”

In 2016, the Wayne County Prosecutor’s Office decided no criminal charges would be filed against Hampton, saying that fatal force appeared justified and a case against him could not be proved beyond a reasonable doubt. Even though he had been cleared of fatally shooting Matthews, Hampton still faced a civil lawsuit. In 2019, he was involved in a $10 million wrongful death lawsuit against the city in which a judge ruled that there was enough doubt about the police explanation for the shooting for the case to go to trial.

Police Chief Ronald Haddad told media outlets he was unaware of the lawsuit settlement and had no immediate comment.

Accountability for Dearborn (A4D), the organization that has been researching police incidents in the city, issued a statement after hearing about the settlement.

“A4D sends its condolences to the Matthews family for losing their loved one and having to spend the rest of their lives mourning an unnecessary and unusually cruel death,” their statement said. “No financial settlement can make up for Kevin’s death and we recognize that the settlement is not justice. Kevin Matthews’ family described him as kind, gentle and sensitive. He used to go walking and would find small gifts like flowers and stuffed animals to bring back to his mother. He was also living with mental illness. According to court records, Officer Hampton was conducting a traffic stop when he saw Kevin, who he recognized from previous encounters. Matthews allegedly stole an energy drink, Hampton pursued Matthews and chose to act as judge, jury and executioner. Kevin Matthews was denied his constitutional right to due process.”

This budget season, we expect to see the Dearborn City Council and city residents call for the budget to reflect our needs, not reinforce the violent, oppressive status quo — A4D

A4D also said in its statement that the city’s choice shows unwillingness to change.

“The city’s choice to settle a lawsuit through a financial payout signals the administration’s unwillingness to critically analyze and change how the police fundamentally operate in Dearborn,” the statement said. “The city would rather pay for increased insurance and multi-million payouts than to address the root of these payouts to prevent future police violence against our community. At the very least, this is fiduciary malpractice. The residents and taxpayers should be outraged that we are constantly footing the bill of poor governance choices.”

The organization said it is continuing its calls for the city to act.

“In response to Kevin Matthews’ murder, A4D continues to call on the city of Dearborn to establish teams of fully-funded, unarmed, non-police emergency responders, remove both lethal and violent weapons from anyone working traffic enforcement, develop positive financial reinforcement for emergency responders who do not use violence or forms of trauma in their interactions and create a budgetary consequence for the ever-increasing financial liability created by police,” it said. “The city of Dearborn has the budget and power to invest in proactive community safety. This budget season, we expect to see the Dearborn City Council and city residents call for the budget to reflect our needs, not reinforce the violent, oppressive status quo. The Dearborn city government must take meaningful steps towards making the city safe for all residents, visitors, students and workers.”

Local activist Leslie Windless said she has more questions than answers around the settlement.

“Reading about the settlement in the case of Kevin Matthews left me with mixed emotions and so many more questions,” she said. “Any time a police encounter ends in multiple gunshots and the death of an unarmed human being it is beyond tragic, plus 100 percent preventable.

“On one hand, I am praying that the judgment brings his family a sense of closure after more than a half decade of fighting. On the other hand, I know there is no amount of money that brings your son, brother or friend back. Money does not equate to justice, peace or accountability. One can only hope that the repeated history of settlements as a resolution to police brutality will spark interest in the community and its leadership to tackle much needed police reform.”