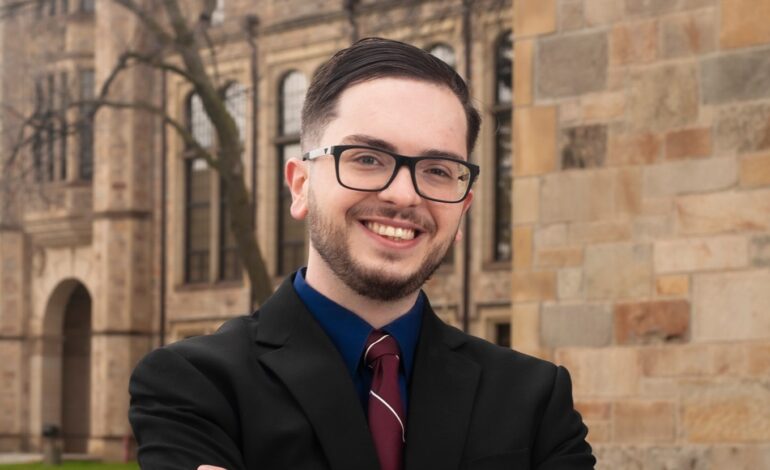 DEARBORN — Jon Akkari, an attorney born and raised in Dearborn, is vying for a position on the City Council this year. A primary election is set for Aug. 3, with a crowded field of Council and mayoral candidates.

Akkari is the son of a Lebanese immigrant father and third-generation Dearbornite mother. His father has been a blue collar worker at the same tool and dye factory for more than 30 years.

Akkari is running on a platform of raising the city’s financial standing through comprehensive public safety reform and other important issues like environmental justice in areas like the city’s Southend that are disproportionately affected by pollution, and increased access to affordable housing with protections for vulnerable populations.

He is a Fordson High School graduate and attended Wayne State University Law School, doing work at the school’s Civil Rights Clinic and Sugar Law Center. After passing the bar, Akkari worked for an employment and civil rights law firm and clerked for a firm working on environmental cleanup dispute between municipal bodies. Since 2018, he’s been practicing law as a personal injury attorney.

“I come from a working class background,” Akkari told The Arab American News. “I’m the first person in my family to get a degree from a four-year university. I believe I’m qualified for City Council not just because I’ve lived here my entire life, but because I’m bringing a different perspective from the usual suspects who normally run for these positions. I’m trying to look out for working families.”

Akkari said he feels the city has stagnated since his childhood — a childhood he feels grateful for. He feels particularly invested in the city, given he stayed and purchased a home in Dearborn after graduating, in contrast to the flight of young professionals from the area.

“The most recent census shows that Dearborn has actually lost population and that’s because the city is not proactive in the lives of its residents,” Akkari said. “A lot of older residents in town will tell you how once upon a time Dearborn city services were top of the line. They don’t feel like that’s the case these days.”

Setting the number of police and fire fighters per capita is an inflexible, rigid provision that has left the city without many options — Jon Akkari

Akkari’s central proposal to bring back those city services is to address the city’s unique charter provision for minimum police and fire staffing requirements, which is connected to a rise in property taxes and cuts in critical services. Dearborn has laid off 30 percent of all non-public safety personnel in the last decade.

“Setting the number of police and fire fighters per capita is an inflexible, rigid provision that has left the city without many options,” Akkari said. “With a budget shortfall, the city slashed a lot of programs the city actually liked. We closed our health department, which served 15,000 low-income residents, and sold off Dearborn Towers, which was housing elderly people. We closed a library and a pool and at the same time that wasn’t sufficient to balance the budget.”

A graph on Akkari’s campaign site shows the budget shortfall with the public safety budget continuing to climb over the city’s operating tax revenue. Voters previously approved an operating millage rate increase on their property taxes to meet those requirements and maintain services, but that is set to expire next year. Without its renewal by voters this year, this gap is projected to become even larger.

Akkari is careful not to summarily promise tax cuts without letting residents understand the history behind the city’s current financial situation and the role the public safety budget plays in it.

“My suspicion is that though many of the candidates are promising tax cuts, they have absolutely no intent of addressing the police and fire share of the budget,” Akkari said. “They’re saying ‘we’re going to cut revenue, yet we’re not going to touch 70 percent of what we spend our city’s money on.'”

Akkari proposes looking at data to determine need when make decisions on staffing, including the creation of a cost-saving unarmed mobile crisis intervention response team staffed by social workers, mental health clinicians and paramedics to handle crisis calls that police are neither equipped nor trained to handle.

“We need to look at data on resident calls to dispatch to see what kind of assistance they’re looking for, to make evidence-based decisions,” Akkari said. “We’re not in that position and are a lot less efficient of a city because of that.”

Akkari’s outlook on Dearborn’s budget status falls in line with a call to reform bloated police departments across the nation, especially in the wake of last year’s protests over the killing of George Floyd in Minneapolis. Dearborn has a high per capita police presence compared to other major cities.

“The cost of public safety is bearing down on the city and is preventing it from making investments in the residents, improving infrastructure and expanding services,” Akkari said.